Sweet and spiced barbecue rubbed chicken can be cooked in a pan or grilled then is topped with a sweet and tangy onion bacon jam for a tasty weeknight meal. 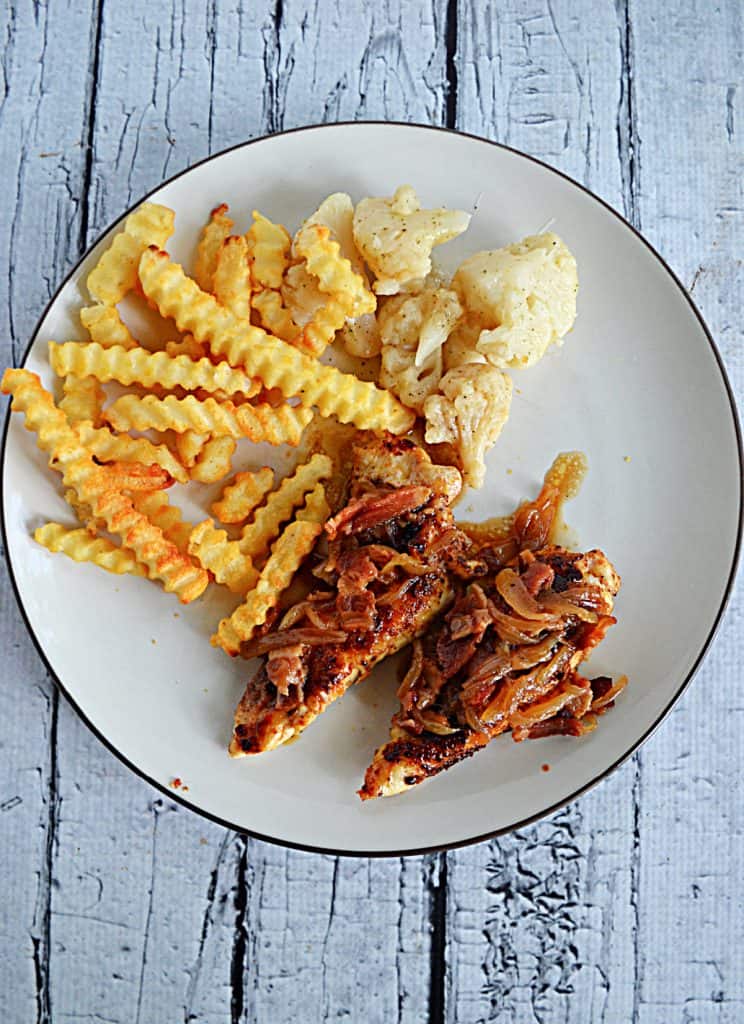 We eat chicken at least once a week.  It's probably my favorite protein because it's easy to cook, fairly cheap, and there's so many ways to use it.

So when I was flipping through my Food Network Magazine and saw a recipe for Barbecue Chicken with Onion Bacon Jam I was pretty excited.  The onion bacon jam sounded amazing and I thought if it was good on the chicken I could probably use it on other proteins as well.

While the onion bacon jam takes the longest it's still possible to have the entire dish out of the kitchen in 30 minutes.  I actually made the jam the night before and then it only took me 15 minutes to put together this weeknight meal.

To make the rub combine the brown sugar, chili powder, paprika, garlic powder, salt, and black pepper in a bowl.  Rub all over the chicken.

To make the bacon onion jam chop the bacon into pieces and add to a sauce pan.  Heat for 5-7 minutes or until brown and crispy.  Remove from the pan and drain on paper towels.

Leave the bacon grease in the pan and add the sliced onions.  Cook for 20-25 minutes or until caramelized.

Add in the bourbon and simmer for 1 minute.  Season with salt and pepper.

Return the bacon to the pan along with the brown sugar, vinegar, and Worcestershire sauce.  Simmer for 5 minutes.

Place the chicken on a place and top with the bacon onion jam.

While the recipe calls for regular bourbon all I had in the house was honey bourbon.  It actually worked really well with this recipe and I would totally use it again.  It added a bit of sweetness so I cut down on the brown sugar in the jam.

I found that it took a little bit longer to cook the jam.  It was still pretty liquid after 5 minutes so I let mine simmer for 10 minutes when it became thick and sticky. 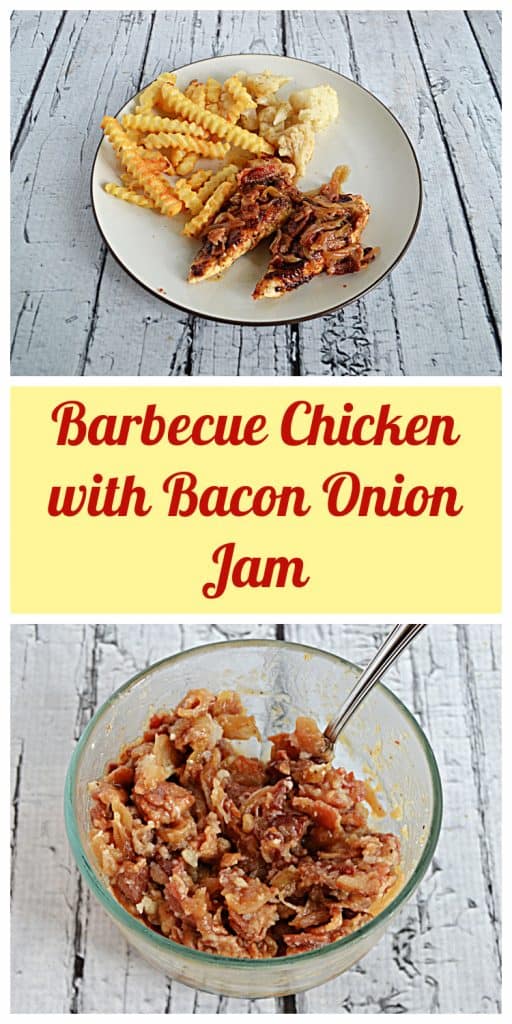 Do I have to use bourbon?

No you don't.  If you have whiskey that's a fine substitute for the bourbon.  If you want a non-alcoholic substitute you can use apple juice or cranberry juice and cut the amount by half.

Can I grill the chicken?

Yes!  While I cooked mine in a pan you can certainly throw this on the grill while you are making the bacon onion jam.

Can I make this ahead of time?

You can make the jam up to 3 days ahead of time.  Simply store it in the refrigerator and either microwave for 1 minute or add to a sauce pan and reheat before serving.  I don't recommend cooking the chicken until you are ready to eat.

Do I have to make the rub?

No you don't.  If you already have a pre-made barbecue rub go for that.  If you don't have all the ingredients just season with salt, pepper, and garlic powder and cook.

Can I use BBQ sauce in place of the rub?

No.   A sauce is very different from a rub and using a sauce will take away from the onion bacon jam. 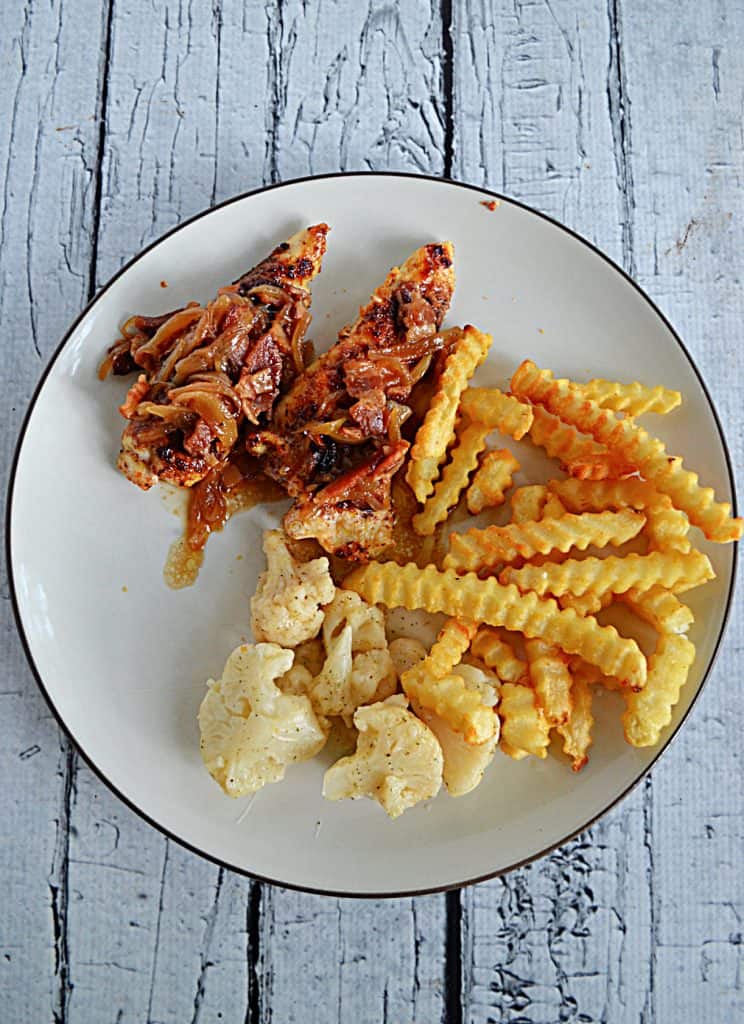 When I was ready to make the chicken I simply rubbed it and tossed it in a pan with olive oil.  It took about 10 minutes to cook and while I cooked the chicken I made fries in the Air Fryer and steamed some cauliflower.

Since I made the jam the night before I simply placed it in the microwave for a minute and it was ready to go.  Once the chicken was cooked I topped it with plenty of jam and served it.

I loved the way to jam tasted!  I thought it would be really sweet but the vinegar totally tames it down.  It's just a little bit sweet, very tangy, and has a ton of bacon and onion flavor.

The chicken tasted a little smokey, a little sweet, and a little spicy.  This barbecue rub is definitely a winner and I'll be using it on other proteins.

The combination of the tangy jam on top of the smoky chicken was perfection.  French fries on the side were a great idea but macaroni salad or potato salad would work well here too.

If you’ve tried my Barbecue Chicken with Onion Bacon Jam or any other recipe on Hezzi-D’s Books and Cooks please take a minute to rate the recipe and leave a comment letting me know how you liked it. I love hearing from you! You can FOLLOW ME on:

For the bacon onion jam: 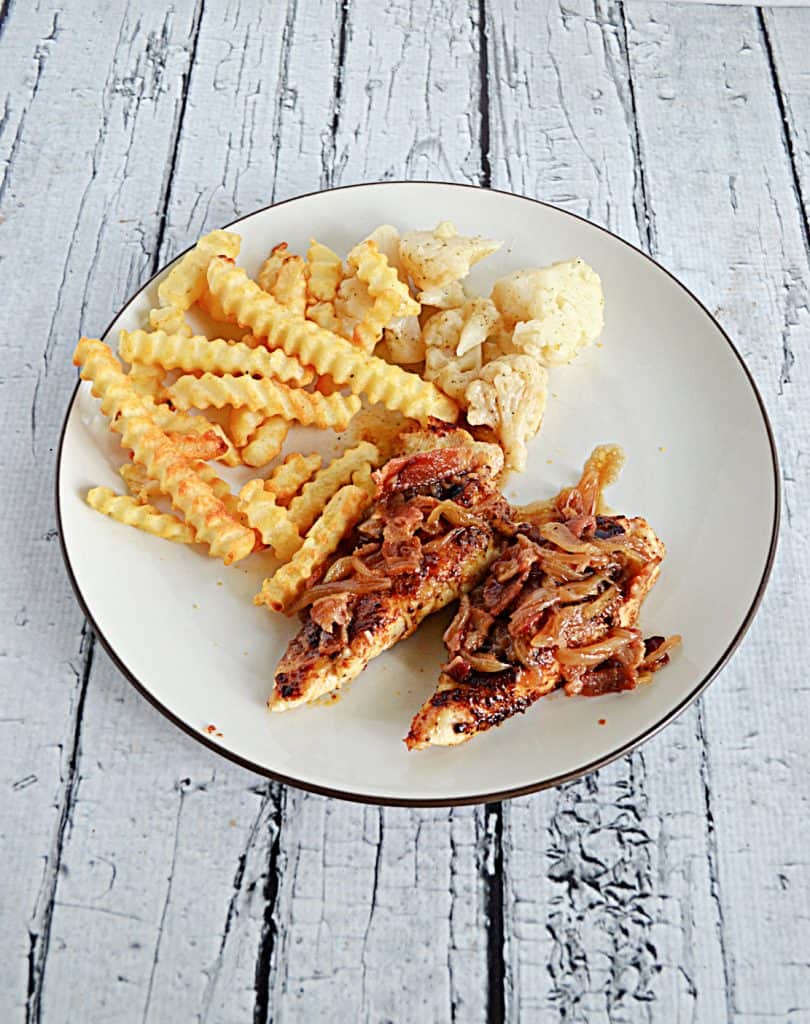