Work was rough today.  My students were having rough days, I wasn't feeling well, and we ended up having a lock in because of an armed robbery at a bank down the street.  The lock in had everyone in a panic so the entire day was just stressful.  Needless to say, the last thing I wanted to do when I got home was cook a complicated meal. 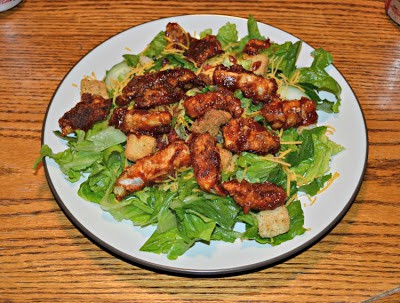 Whenever this happens I usually either make pasta or a salad with protein.  I had chicken defrosting in the refrigerator so chicken it was.  I usually grill or bake my chicken but after a stressful day I wanted my chicken fried so I made boneless BBQ chicken wings out of chicken breasts.  I fried them up, tossed them with an easy homemade BBQ sauce, and served them over fresh greens with ranch dressing.  Fresh, easy, and totally tasty!

1.  Combine all ingredients for the salad in a bowl.  Toss to mix and set aside.

2.  In a small saucepan combine all the ingredients for the BBQ sauce.  Bring to a boil over medium heat, stirring occasionally.  Reduce heat and simmer for 15 minutes.

3.  Meanwhile, combine the flour, salt, pepper, chili powder, and paprika in a shallow dish.  Combine the egg and milk in a separate dish.

4.  Heat half of the vegetable oil in a large skillet over medium high heat.  Dip half of the chicken pieces into the milk mixture then roll in the flour mixture.  Place in the skillet with the oil and fry for 2-3 minutes per side or until golden brown.  Remove from the pan and drain on paper towels.   Add remaining oil and repeat with remaining chicken.

5.  Put the chicken pieces in a bowl and add the BBQ sauce.  Toss to coat.

6.  Divide the salad among plates and topped with BBQ chicken. 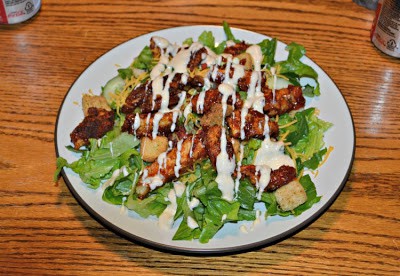