This January we've had a ton of weird weather.  Several days have been in the 50's and other days have been in the teen's with a lot of snow.  This month Melissa,  from I Was Born to Cook, challenged us to make a snow day treat for What's Baking?  I had a delay this past Friday so I immediately wanted to use that time to make a decadent dessert for our weekend football party. 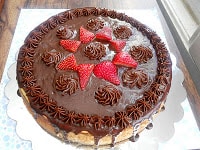 I love to make brownies and our friends enjoy them but I wanted to do more then just plain brownies.  Then I thought about the mini cheesecake bites that went over so well at our New Year's party.  I remembered seeing a recipe for brownie bottomed cheesecake and went to town.

The brownie layer is rich and chocolaty.  It's a great base for cheesecake.  The cheesecake was a basic recipe with cream cheese, eggs, and sugar.  My cheesecakes don't always turn out but I think leaving the cheesecake in the oven to cool helped a lot.  On top of the cheesecake goes a thick and gooey chocolate glaze.  Finally I piped on the whipped chocolate ganache and garnished the cheesecake with strawberries.

This dessert is one for hard core chocolate and sweet tooth lovers.  It weighed in at just over 5 pounds.  The layer of cheesecake in between the different chocolates was out of this world!  The strawberries gave a new dimension to the dessert with a sweet and sour touch.

Our friends raved about this dessert and one told us that he took a piece home to save for the next day but ended up getting up at three in the morning and eating it then!  This is the perfect special occasion dessert because it isn't too difficult to make, though it is time consuming, and it's very impressive.

1.  Preheat the oven to 350 degrees.  Butter the bottom and sides of a 10 inch springform pan.  Line the bottom of the pan with parchment paper.

2.  In a microwave safe bowl combine the chocolate, butter, and vegetable oil.  Heat in 30 seconds intervals in the microwave, stirring after each interval, until the chocolate has melted and the mixture is smooth.  Whisk in the cocoa powder and espresso powder until well combined.

3.  In a medium bowl whisk together the eggs, sugar, vanilla, and salt.  Add the chocolate mixture and mix well to combine.  Gently stir in the flour.

4.  Spread the batter evenly in the prepared pan.  Bake for 20 minutes or until brownies are set but slightly undercooked.  Allow to cool for 30 minutes on a wire rack.

3.  Combine the sugar and salt in a bowl.  Add the sugar to the cream cheese in three additions, mixing on medium speed after each addition.

4.  Add in the sour cream, lemon juice, and vanilla.  Beat on medium speed for 1 minute.  Use a rubber scrapper to scrape the sides of the bowl. 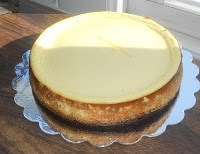 5.  Add in the eggs 2 at a time, mixing them in on low speed.  After all 6 eggs have been added, mix in the egg yolks.  Scrape the sides of the bowl again and mix on medium speed for 1 minute.

6.  Pour the cream cheese mixture over top of the cooled brownies.  Allow the batter to settle for 5 minutes.

7.   Place the cheesecake pan on a cookie sheet and bake for 15 minutes.  After the 15 minutes are up reduce the oven temperature to 250 degrees.  Continue baking for 45 minutes to 1 hour, or until the cheesecake is set in the middle.

8.  Turn off the oven and open the door a crack.  Allow the cheesecake to cool for 30 minutes inside of the oven with the door cracked.

9.  Once the cheesecake has cooled, transfer to the refrigerator and allow to chill at least 6 hours or overnight. 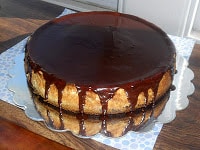 1.  Combine the chocolate and whipping cream in a microwave safe bowl.  Heat on medium power in the microwave in 30 second intervals, stirring in between each interval until the mixture is smooth.

2.  Stir in the corn syrup, vanilla, and salt.  Stir until well combined.

3.  Unmold the chilled cheesecake and place on a cake board or plate that you will serve it on.  Slowly pour the glaze on top of the cheesecake allowing some to drizzle over the sides.  Allow the glaze to set for 15 minutes. 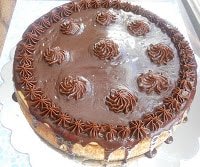 1.  Combine the chocolate and whipping cream in a microwave safe bowl.  Heat on medium power in the microwave in 30 second intervals, stirring in between each interval until the mixture is smooth.

2.  Whisk in the butter until fully incorporated into the chocolate.  Stir in the powdered sugar and allow the mixture to thicken until it is piping consistency.

3.  Put the ganache in a piping bag with a large star tip.  Pipe ganache on top of the cake.  Top with raspberries or strawberries if desired.  Store in the refrigerator until ready to serve. 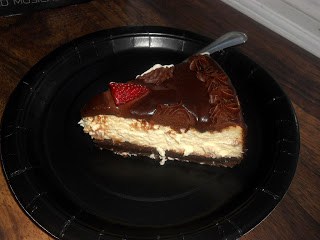