My dad retired!  After months of saying he was going to do it, he actually did.  He called me up when he had 9 days left and he was very worried.  He told me he was in the single digits and he didn't know how to feel.  I can't imagine working for 30+ years at the same job and then suddenly one day not having to go to work anymore. 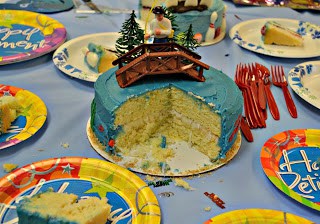 Don't get me wrong; if anyone deserves to retire it's my dad.  He never sits still.  He's always fixing something around his house, my brother's house, or one of our relatives houses.  When he isn't doing that he is golfing, fishing, or bowling.  Now that he has more time on his hands I can't wait to see what he gets into.

For his retirement he said he didn't want a party.  All he wanted was to go to dinner with our immediate family.  So we told him we would all go out to dinner the weekend after he retired.  We were also having a birthday party for my cousin Greggy.  However before Greggy's party we wanted to have a surprise retirement party for him.

When I asked my mom what kind of cake he wanted she didn't know.  We talked about decorating them with fishing, bowling, and golfing.  Someone how this turned into making him three different cakes on top of making Greggy's cake.  Knowing that he really likes coconut I wanted to make one of his cakes a coconut cake.  I've never actually made a coconut cake before but I figured it couldn't be too hard to make.

The making of the cake itself was easy.  It had a light coconut flavor and was delicious.  I frosted it with coconut buttercream and then came the decorations.  I thought it would be easy but when I worked all day Friday and had to have them ready to drive up to Pittsburgh Saturday at 8 am things got a little bit tricky.

Thankfully the cake got decorated, it looked good, and it made it to the party.  My dad was really surprised by the party and even more surprised by his collection of cakes!  Happy Retirement Dad!

2.  In a large bowl cream the butter and sugar.  Add in the eggs one at a time, beating well after each addition.  Stir in the vanilla.

3.  In a medium bowl combine the flour, baking powder, and salt.

5.  Divide the batter between the two pans.  Bake for 25-30 minutes.  Remove from oven and cool for 5 minutes.  Run a butter knife around the edges of the pan and invert the cakes onto a wire rack.  Cool completely.

6.  In a bowl mix the butter, coconut milk, and vanilla with a hand mixer.  Beat for 2 minutes or until smooth.  Add in the powdered sugar a cup at a time and mix until the frosting is desired consistency.

7.  Place one cake layer on a cake round.  Spread the top with 1 cup of frosting.  Sprinkle with the coconut and top with the second cake layer.  Frost the cake with the remaining frosting. 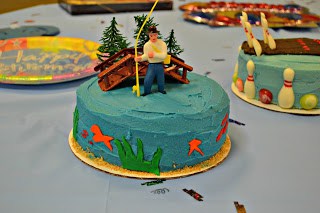