Coconut Cream Pie is made with a vanilla bean and coconut pastry cream topped off with plenty of freshly whipped cream and decorated with coconut, cinnamon, and white chocolate. 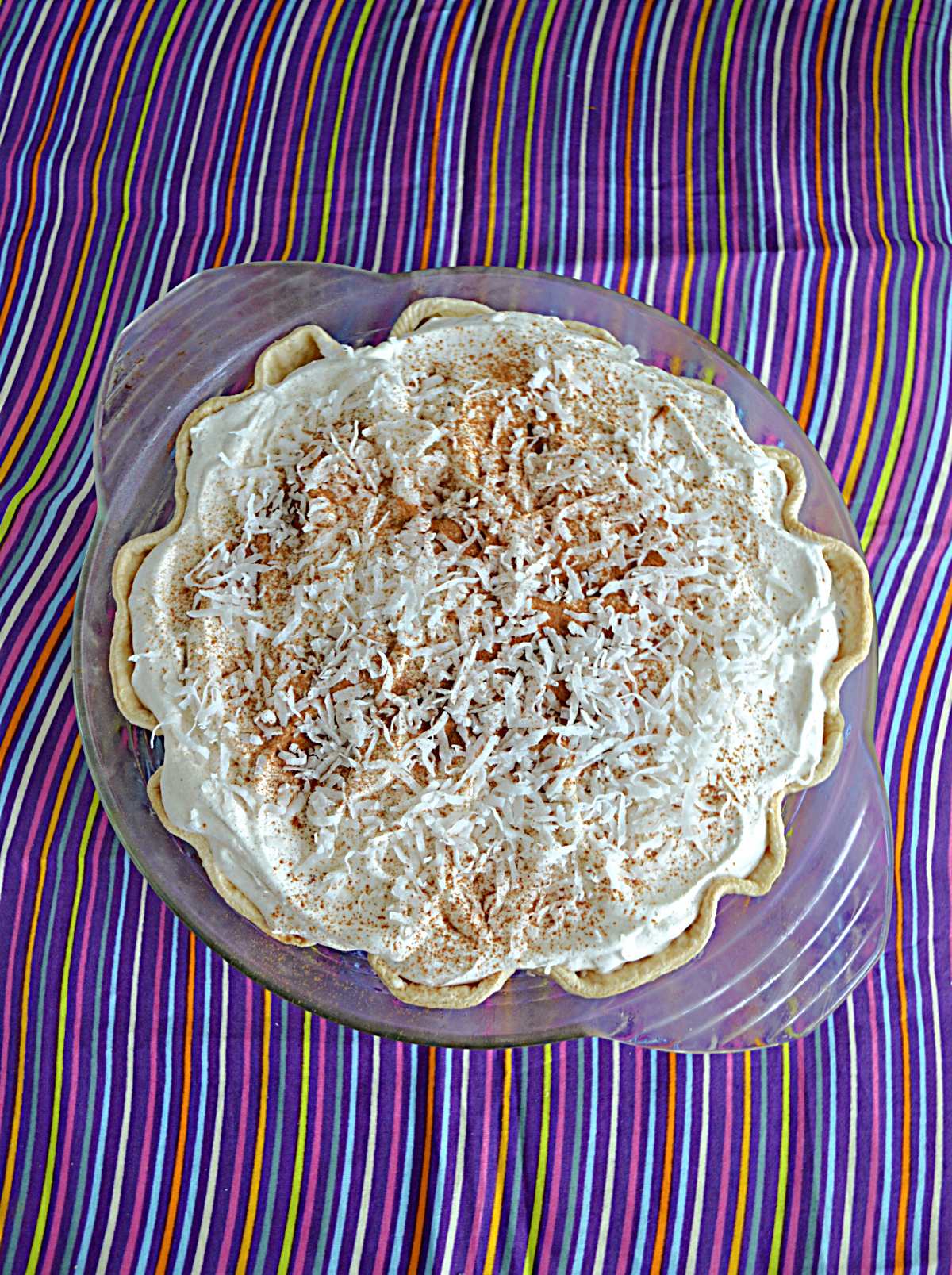 Let’s talk about my dad. I probably had a different experience as a child then many other children did. My dad worked the night shift so that he could be home with my brother and I during the day while my mom was working.

This meant that my dad cooked us breakfast and lunch while mom cooked us dinner at night. It was great getting to see both of my parents cook and interacting with them in the kitchen. 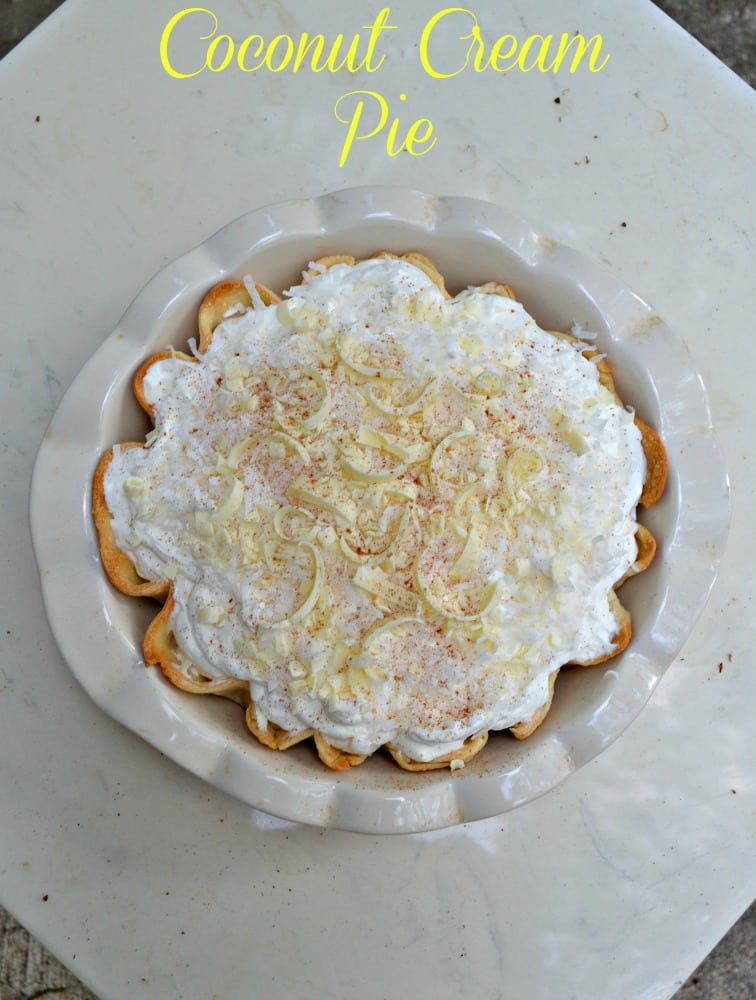 Today I wanted to share one of my dad's favorite foods.  I know I’ve shared pierogies and paska in the past because those are two of the dishes that my dad always makes. This year I decided to make a recipe that he really loves but I have never made before.

It’s Coconut Cream Pie. I’ve never made a coconut cream pie because not many people in my family like it. My husband doesn’t eat coconut so it would be wasted at our house.

So when I had a luncheon at school last week I thought it would be a great time to try the Coconut Cream Pie on my friends and if it was good I could then make it for my dad for his birthday.

To Make the Pastry Cream:  Combine the milk, coconut milk, and coconut flakes in a medium saucepan over medium heat. Cut the vanilla bean in half and add to the pan. Heat the milk until it begins steaming but do not boil.  Remove from heat.  In a small bowl combine the eggs, sugar, and flour. Whisk until combined. Add ⅓ cup of the warm milk mixture to the egg mixture, whisking constantly, to temper the eggs. Slowly pour the egg mixture back into the milk mixture while whisking constantly.  Return the mixture to medium high heat and cook for 5 minutes, whisking constantly, until the mixture is thick. 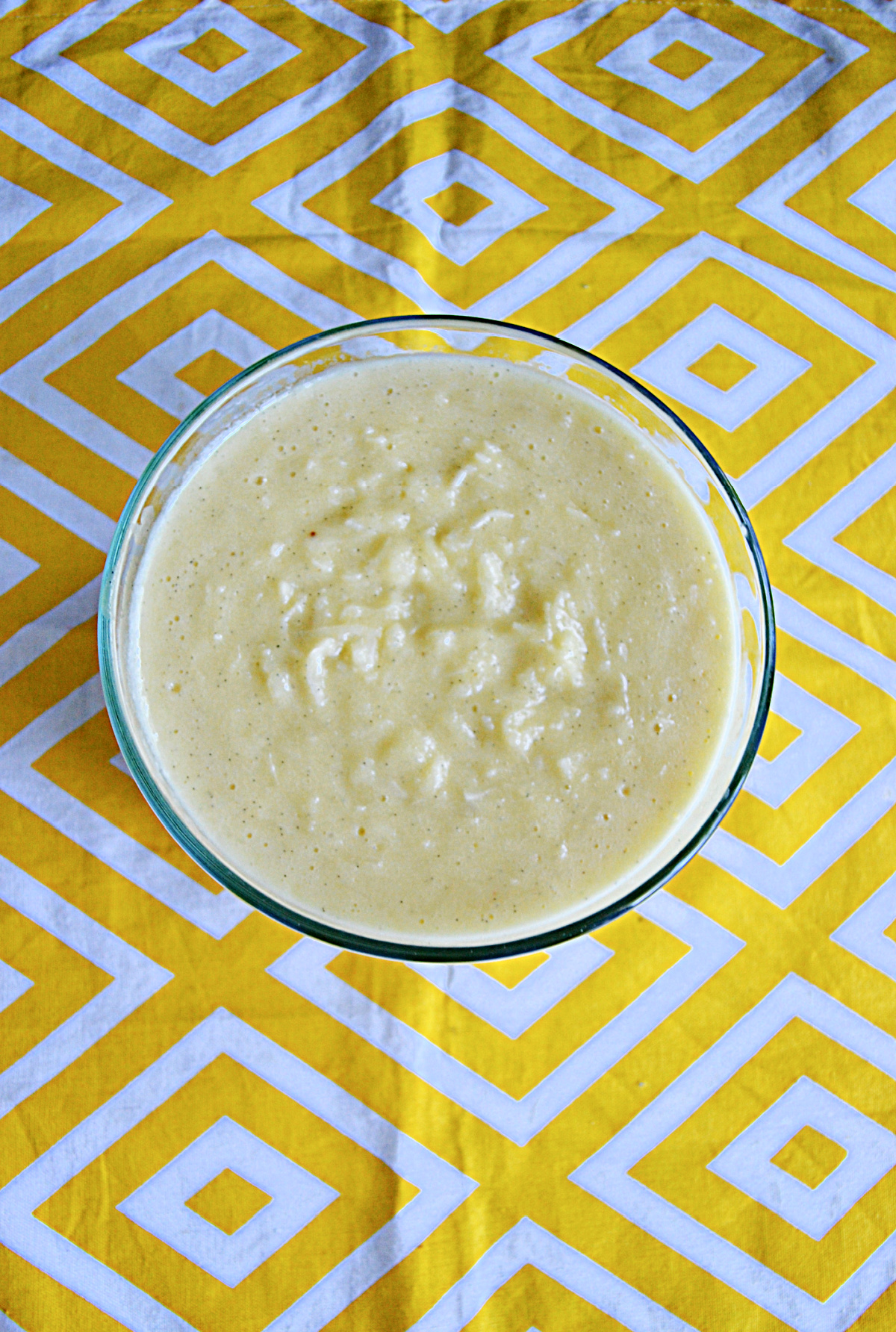 I know that looking at the list of ingredients it looks like this pie is going to be a ton of work.  There are several components to making it but none of them are very difficult and most of them can be made in advance.

So let’s talk about this recipe. It involves making a pie crust, making a coconut pastry cream, and whipping cream. Then the decorations on top really make the whole pie.

I’m going to start by admitting I didn’t make the crust. I bought a refrigerated pie crust and baked it myself.  Totally acceptable as the crust is not the star of the show in this pie recipe.

Then I went for the pastry cream. Now pastry cream can be finicky. You have to get it hot, but not too hot.

It has to just start to bubble but you don’t want it to boil. You have to whisk it so the eggs don’t curdle and you have to make sure it is thick enough.  It's work but when it's done right it's delicious.

So I made the pastry cream, had no curdling, thought my mixture was thick enough and put it in the refrigerator to set. Well, it did thicken up but it didn't thicken up enough to withstand being sliced into a pie.

So I read a bunch of different websites on how to fix it and in the end I whisked a little gelatin with hot water then beat it into the pastry cream with a mixer. It worked like a dream! 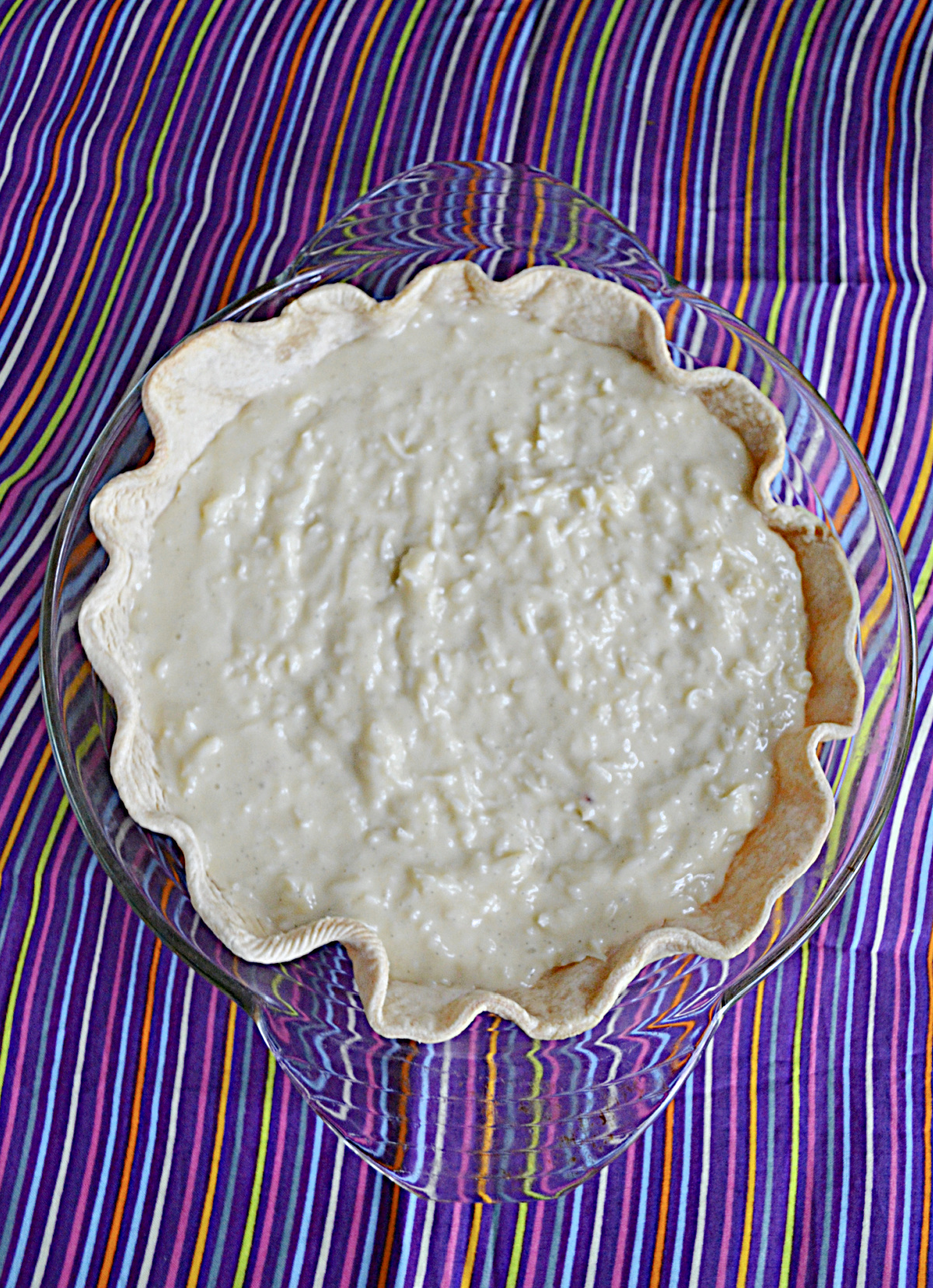 What is coconut cream pie?

Coconut cream pie is basically a pie crust filled with a thick coconut pastry cream that's topped off with whipped cream and lots of coconut.  A lot of people just use coconut pudding for the base and that's an easy way to do it but making coconut pastry cream is so much better.

Why do you add the hot milk mixture to the eggs?

Do I need to add the coconut and white chocolate on top?

You don't have to but it does two things.  The first thing it does is decorate the pie and makes it look finished.  The second thing it does is add flavor to the pie.  The coconut really comes through and the white chocolate just adds another dimension of flavor tot he pie.

Can I use a graham cracker crust?

Putting the pie together was easy. I had so much fun with the coconut and chocolate shavings on top. I was really proud of how it looked and hoped it tasted ok too.

When I took a bite I know I could feel myself smiling. It was rich, creamy, and full of coconut. 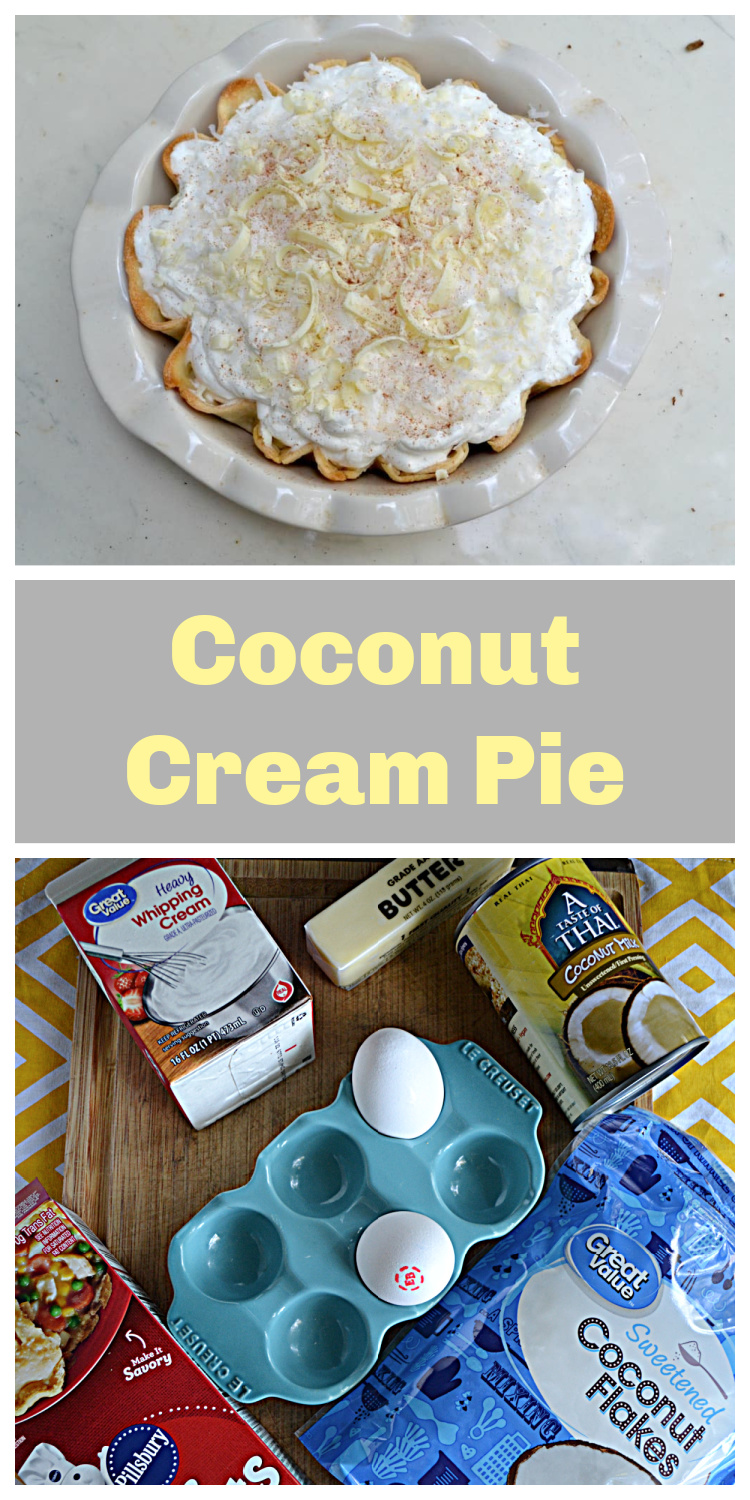 I made it again for my dad for his birthday this year and while the pastry cream wasn't as stable it still tasted great.  My dad enjoyed and that's all that really counts.

If you’ve tried my Coconut Cream Pie or any other recipe on Hezzi-D’s Books and Cooks please take a minute to rate the recipe and leave a comment letting me know how you liked it. I love hearing from you! You can FOLLOW ME on:

Recipe adapted from The Jey of Cooking 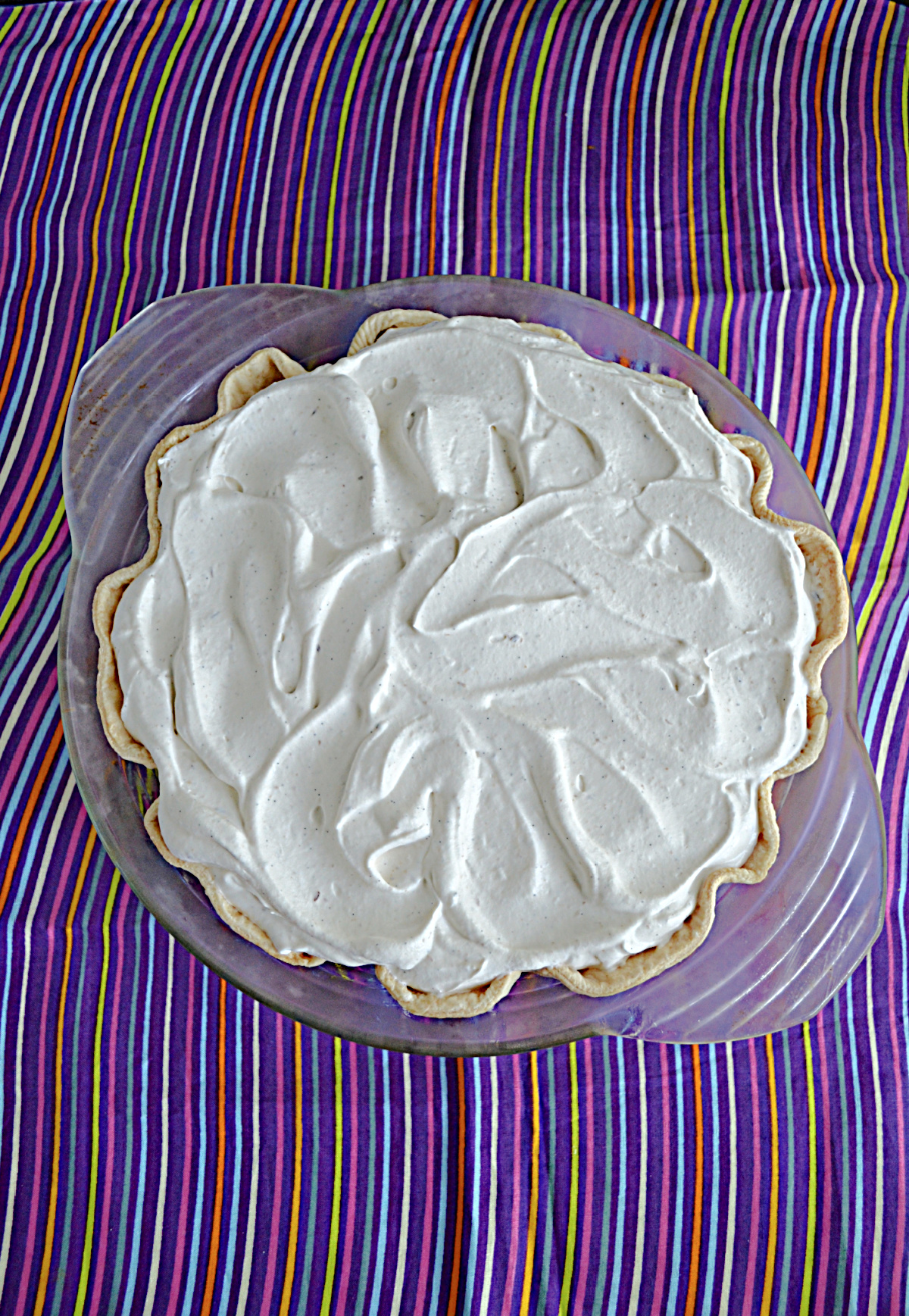