Former society wife Grace Cassidy is learning to live on the minimum wage she earns as a bed & breakfast inn-sitter. Grace finds her cat’s bloody paw prints leading away from a bathtub and wants to run for her life. But she can’t. Her 19-year-old son is accused of pushing his pregnant girlfriend down a flight of concrete steps and she won’t abandon him. (-synopsis) 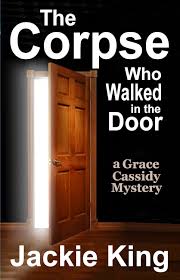 The book begins with Grace inn-sitting for minimum wage.   Her husband ran off with another woman and left her with absolutely nothing.   After 6 months of being on her own, Grace is finally making an honest life for herself and her son.  Things seem to be going well until an unexpected guest rolls into the inn.   His name is Billy and he is the twin brother of the own, Wilbur.  The only problem is, Billy was presumed dead 7 years ago after a boating accident.

The reappearance of Billy sends the inn reeling.   Wilbur is in a horrible mood, Uncle Jasper is meaner then ever, and Grace is left to deal with a grouchy family.   Put that with the fact that she finds her sons girlfriend at the bottom of a set of stairs and Grace is not having a good day.   It gets even worse when her sons girlfriend accuses Grace's son of pushing her.   That's not all; she also claims to be pregnant!

Things are getting crazy at the inn and it all comes to a head when Grace fins a dead body in the bathroom.

I really enjoyed this book.   There was a lot of background on the characters which made them believable.  Grace is a strong woman just trying to make an honest living for herself and her son.  She also haws a budding romance with a local policeman who turns out to be a kind and generous man.

The family that owns the inn is a soap opera in itself.   Girlfriends dumping boyfriends and marrying family members, twins vying for the same job, and sibling rivalries that date back 40 years.  They were completely nuts but that's what made them so believable!

The only thing I did not like was the ending.  The actual murderer confessing was fine, but the book stopped there.   There was no after math, no telling what happens to the other characters, nothing!  I felt like the book stopped a chapter too soon.

Other then that, I really enjoyed the book and will probably read others in the series.