One of my resolutions for this year is to make healthier but easier dinners.  Last year I made many healthy meals but some of them took a long time to prep so they weren't something I could make during the week.  I'm really trying to make dishes that I can make on a weeknight and that I will want to make throughout the year. 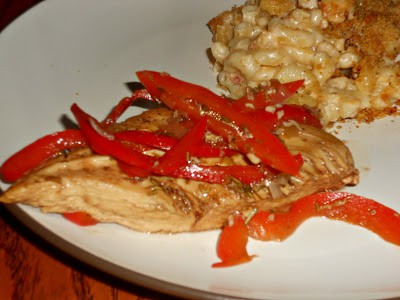 This chicken with balsamic bell peppers is easy to prepare, doesn't take long to cook, and is healthy.  It also has ingredients that are often found in my house so I didn't have to make a special trip to the market in order to make this dish.  The chicken is seasoned well and then served with the balsamic glazed peppers.  Tasty and nutritious I can see this meal becoming a staple in our house. 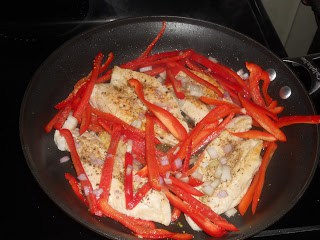 3.  Brush the chicken breast halves with 2 teaspoons of olive oil and spread the spice mixture all over them.

4.  Heat 2 teaspoons of olive oil in a large skillet over medium high heat.  Add the chicken and cook for 3-4 minutes or until it has browned.  Flip the chicken over and cook for an additional minute. 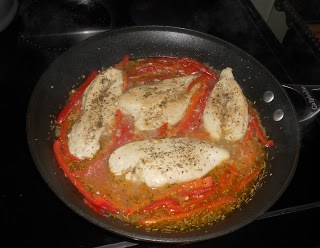 5.  Remove the chicken to an 11 x 7 baking dish coated with cooking spray.  Bake the chicken in the oven for 10 minutes or until it is fully cooked.

6.  Meanwhile, return the skillet to medium high heat and add the remaining olive oil.  Add the bell peppers and shallot.  Saute for 3 minutes.  Stir in the chicken broth, scraping the bottom to loosen the browned bits.

8.  Place the cooked chicken on a plate and spoon the peppers and sauce over top of it. 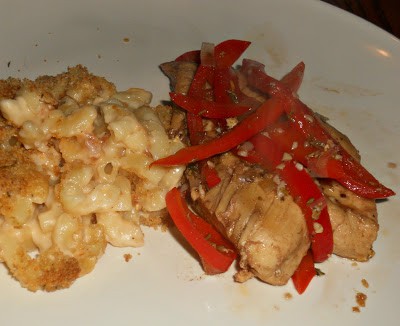