We're getting into fall and I've noticed that our CSA is starting to slim down.  I'm pretty sad about this and can't even imagine what it's going to be like in mid-October when we don't receive any fresh produce.  I'm dreading the thought.  There is still enough produce to make a few meals each week though and I'm trucking on with my CSA Wednesdays. 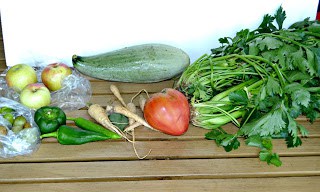 This week we received a couple of tomatoes, jalapeno peppers, green peppers, parsnips, celery, apples, tomatillos, and an Armenian cucumber.  We ate the apples first this week because they are really fresh and delicious and they don't keep as long as the rest of the produce.  I used the tomatillos when I canned Italian tomato sauce this week.  Keep your eye out for the recipe as it's coming soon!  I'm planning on using the jalapeno peppers with our tacos later on in the week and the tomatoes in our salads. 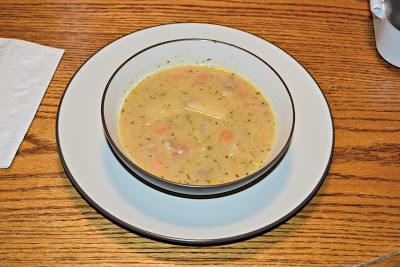 That leaves the celery and parsnips.  I'll be honest, until I started this blog I didn't have a clue what parsnips were.  They are a root vegetable and go well in dishes that include carrots and potatoes.  I used them to make a creamy soup that is packed with flavor.  It included onions, potatoes, carrots, parsnips, and celery.  The vegetables are sauteed then added to the soup.  After cooking they soup is blended with a hand blender (yes my new Kitchen-Aid one!) so that about half of the vegetables are blended and the other half stay chunky.  I love the flavor and the texture of this soup and it was a perfect fall supper meal.

1.  Melt the butter in a large heavy bottom pot over medium heat.  Add the onions and saute for 15 minutes, stirring occasionally.

2.  Add in the carrots, parsnips, and celery and saute for 10 minutes.

3.  Pour in the chicken broth and add the potatoes, garlic, parsley, and thyme.  Simmer for 30 minutes or until the potatoes are soft.

4.  Using a hand blender, blend until about half of the vegetables are pureed but there are still some chunky.  Add in the half and half and sherry.  Mix well and taste, adding salt and pepper as needed.

5.  Ladle into bowls and serve hot. 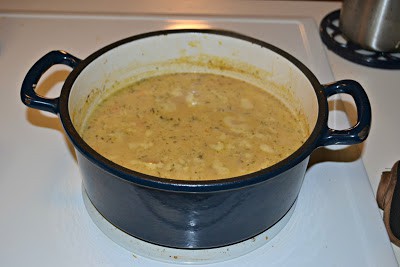