After losing his leg to a land mine in Afghanistan, Cormoran Strike is barely scraping by as a private investigator. Strike is down to one client, and creditors are calling. He has also just broken up with his longtime girlfriend and is living in his office.

Then John Bristow walks through his door with an amazing story: His sister, the legendary supermodel Lula Landry, known to her friends as the Cuckoo, famously fell to her death a few months earlier. The police ruled it a suicide, but John refuses to believe that. The case plunges Strike into the world of multimillionaire beauties, rock-star boyfriends, and desperate designers, and it introduces him to every variety of pleasure, enticement, seduction, and delusion known to man.

Introducing Cormoran Strike, this is the acclaimed first crime novel by J.K. Rowling, writing under the pseudonym Robert Galbraith.  (-synopsis) 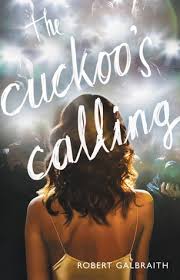 The story begins with Cormoran Strike, a private investigator, just having broken up with his girlfriend.  When he runs outside to catch her he literally runs into Robin, his new assistant sent to him by Temporary Solutions.  Robin's first day is not how she expected, especially when minutes after she starts John Bristow walks in.

John Bristow is upset about the death of his supermodel sister, Lula Landry.  The cops have ruled it a suicide but he knows it was murder.  He hires Strike to find the killer and bring his adopted sister's murderer to justice.  Strike doesn't want to take the job but he's in desperate need of money and John's brother, Charlie, was a childhood friend of his.

Through twists and turns we learn more about the life of Lula Landry.   The reader also learns about her family, friends, and what life was like for her as the biracial adopted child of wealthy parents.  Along the way Robin and Strike become a team and work together to find the killer.

I had a hard time getting into the book because there were so many details and characters to remember.  However, once I learned the main characters and Strike started following clues, it became more interesting and I wanted to know who killed Lula.  I found Strike to be a tough private investigator who wanted to make it on his own despite the cards he was dealt.  I also felt he did a good job keeping his distance from Robin but letting her know he appreciated her.

Robin was one of my favorite characters.  Although she is simply a temporary assistant, she throws herself into the investigation and helps Strike both professionally and personally.  Even when he attempts to hold her at bay she is there for him.  Together the two manage to piece together the last days of Lula's life and eventually find the killer.

I will say that I never figured out who the killer was; it was a total surprise to me but it made sense in the end.  I enjoyed following the clues with the characters until the end.  I did think that some parts were more filler then anything and didn't add much to the storyline.

All in all, if you enjoy mysteries this would be a good read.

Now for a personal note.  I don't quite understand why authors write under a pseudonym when their real name is still on the book jacket.  It makes no sense to me.  I would understand if they kept it a secret who they are but why write it, use a different name, but let everyone know it is you who is writing the book.

So my question, how do you feel about authors using a pseudonym but then putting their real name on the book as well?