Reva Ewing, a former member of the Secret Service and a security specialist for Roarke Enterprises, is a prime suspect in a double homicide. She had every reason to want to kill her husband, the renowned artist Blair Bissel. Not only was he having an affair, he was having it with her best friend.

But Lieutenant Eve Dallas, who's on the case, believes Reva is innocent. Eve's instincts tell her that the murder scene looks too perfectly staged, the apparent answers too obvious. And when she digs for more, she discovers that at nearly the exact time a kitchen knife was jammed into the victim's ribs, the passcode to his art studio was changed - and all of the data on his computer deliberately corrupted.

To Roarke, it's the computer attack that poses the real threat. Signs show that this is the nightmare his company has secretly been preparing for. He and Reva have been under a code-red government contract to develop a program that would shield against a new breed of hackers, the Doomsday Group. These techno-terrorists with brilliant minds and plenty of financial backing hack into systems, steal data, and corrupt computer units on a large scale - and kill anyone who gets too close.

Eve and Roarke must infiltrate an extraordinarily secretive government agency to expose the corruption at its core, before the virus spreads from one office to a corporation to the entire country.  (-synopsis) 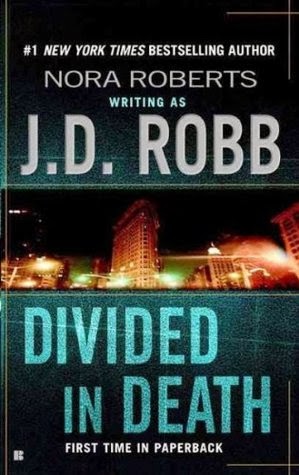 Let me start by saying this is my current favorite series.  I love how strong Eve Dallas is and how sexy her husband Roarke is.  The writing in this series is fantastic and I've grown to love the characters.  I don't normally write reviews for books in a series but I had to for this one because it was just so good!

The book opens with the murder of a couple.  Reva Ewing is found at the scene and suspected to be the killer.  Eve rushes to the scene with Roarke only to find out that Reva is the daughter of Caro, Roarke's personal admin.  As Eve looks around she finds that things are just a little too tidy for comfort and she suspects Reva has been set up.

As Lieutenant Eve Dallas rushes to find the killer and clear Reva's name, information comes to light about her childhood.  Her father's name is revealed as is the fact that Homeland Security had been watching him.  Eve goes through more nightmares both while sleeping and while she's awake as she watches Roarke plan to kill the people who hurt her.

Throw in the fact that the killer of the couple in this story begins killing off other people and may just be a government agent and this installment of the In Death series had it all.  There is a lot of action, including Eve getting hurt. Peabody is now a Dectective and Eve's partner and starts showing just how much she has learned from Eve.  Then Eve and Roarke begin growing apart and don't know how to get back to get back to each other.

I was on the edge of my seat with this one to find out what would happen with all of the situations.  I saw a new side of Eve Dallas that I really enjoyed and it just made me like her even more. We learn more about her childhood situation which causes the riff between her and Roarke and also brings Captain Feeney into the mix.  There is an appearance from Dr. Mira which brings her and Eve closer as well.

I feel like the characters were very well developed in this book and we learn so much more about them.  The action that I love is in the book as well.  There is a little bit of the futuristic technology thrown in to keep the "tech geeks" happy.  If you enjoy murder mysteries with a lot of action and some romance, you need to check out this series!