As you know I love pasta.   I could simply eat pasta with butter, garlic, and Parmesan cheese on it for dinner every night.  My 16 month old is the exact same way.  Sometimes when it's just the two of us at home I'll make us buttered noodles with Parmesan cheese and some fruit for lunch.  It's one of our favorites. 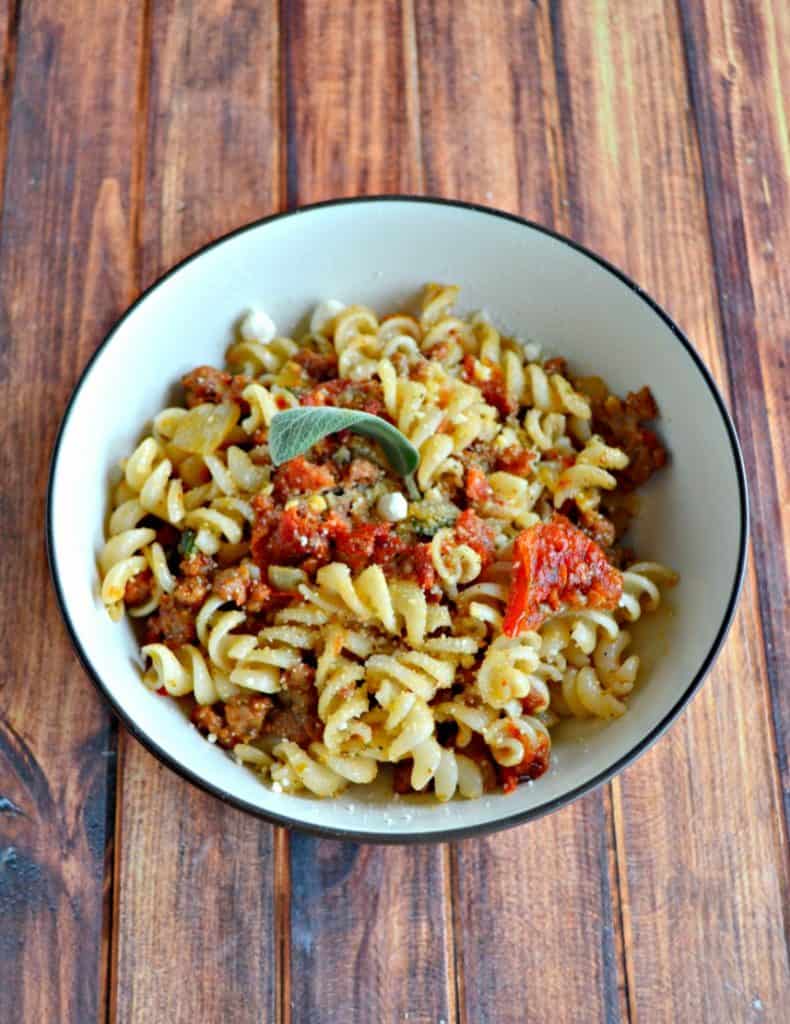 However, sometimes I like to have a more creative pasta dish.   Just because it's creative doesn't mean it has to be difficult.  I think people confuse creativity with difficulty and in this case it just isn't true.  I've made a flavorful Gluten Free Pasta with Chorizo and Sun Dried Tomatoes in a Lemon Sage Butter Sauce and it takes just 20 minutes and has less than 10 ingredients in it.  How awesome is that?

Not only is it a tasty pasta dish but it's gluten free.  I know what you are thinking, are you kidding me?  No I'm not.  In this recipe I used Tresomega Gluten Free Quinoa Fusilli Pasta.  I'm usually not a huge fan of gluten free pasta because I think it has a weird taste and texture but that wasn't the case with this pasta.  I found it to be a little more firm than traditional pasta but it had good texture and taste.  My toddler, who is pretty picky, even gobbled it up so I knew it was a winner.

To make this dish I started on the chorizo at the same time I started boiling the pasta because that's all the time it takes.  This is a fabulous weeknight dinner idea because it's quick, easy, and filling.  It simply has chorizo, sun dried tomatoes, and onions sauteed together before the sauce is made.  The sauce is made from butter, fresh sage, fresh lemon juice, and seasonings.  Toss the sauce together with the pasta, top it with Parmesan cheese, and dinner is served!

The flavor of this pasta dish is complex.  It's a bit spicy from the chorizo but not overwhelmingly so.   The sun dried tomatoes pack a ton of flavor and the fresh lemon juice really brighten it up.  The Parmesan cheese on top adds a bite that perfectly balances everything out.   There wasn't a bite left to eat after we had our dinner last night! 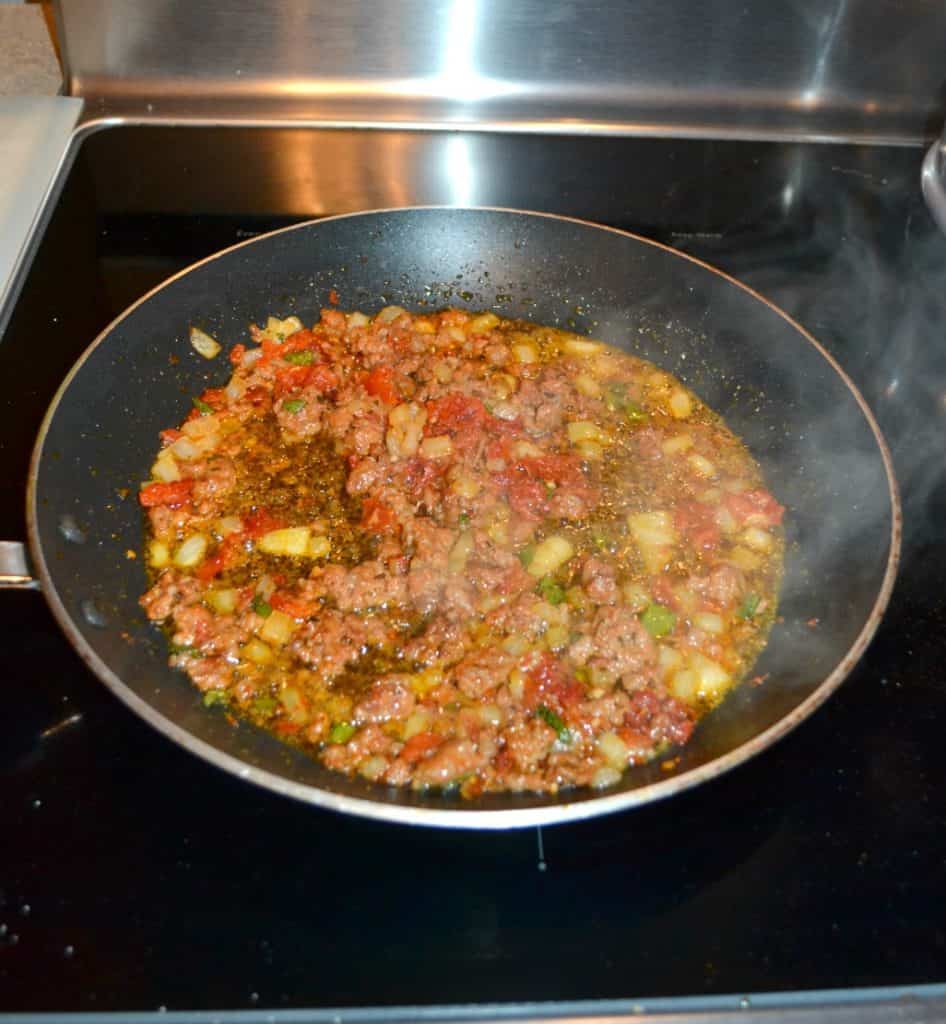 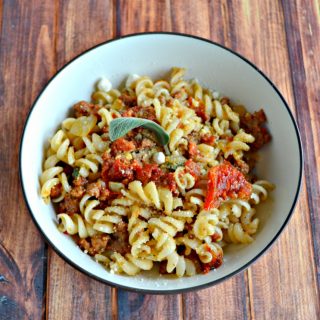 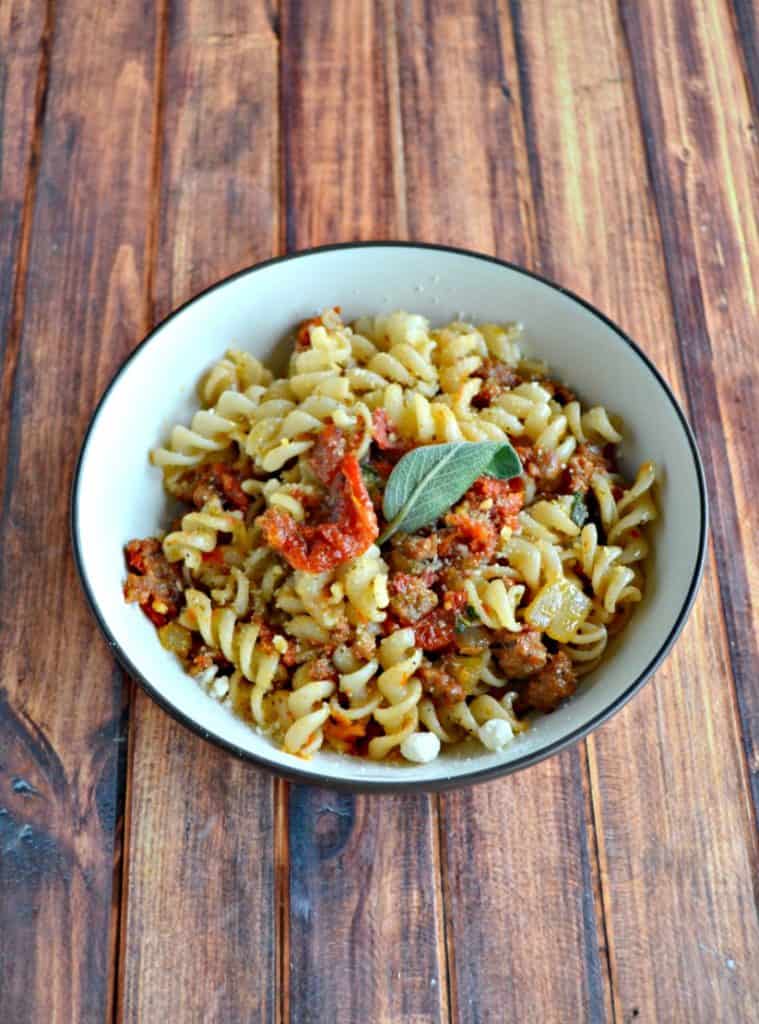 I received samples of Tresomega Gluten Free Organic Quinoa Pasta to use in a recipe but all opinions are 100% my own.