A remote summer camp becomes a lurid crime scene when the bodies of two teenagers are found in a bloody, real-life rendering of a classic Grimm’s fairy tale. Trapped in the wilderness, the remaining counselors must follow a trail of dark children’s fables in order to outwit a psychopath and save the dwindling survivors before falling prey to their own gruesome endings.

Drawing on the grisly, uncensored details of history’s most famous fairy tales, Grimm Woods is a heart-pounding thriller about a deranged killer who uses traditional children’s stories as tropes in elaborate murders. Set against the backdrop of modern-day Michigan, it’s a journey through the mind of a dangerous zealot and a shocking glimpse into the bedtime stories you thought you knew.  (-synopsis) 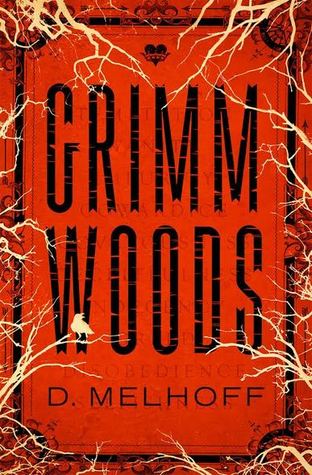 This book had me hooked from the beginning.   Scott is a 21 year old who goes to Camp Crownheart to be a counselor.   His very first experience is sneaking into the woods to get a cigarette where he meets another counselor.  The two get into an argument which ends with them talking about the camp.  It turns out many of the counselors went to the camp when they were younger.

For all appearance Camp Crownheart is a fairytale camp.  There is a real life drawbridge to get into the camp, towers rising above the trees, castles that house the mess hall, and statues of characters throughout the camp.  It’s a lovely camp and one that should fill the children with joy.  It is also an isolated camp with the closest city being 100 miles away and the closest cell phone tower being 45 minutes away.

The camp gets off to a great start and all of the children are having a great time until two of the counselors are found dead.  At first it looks like an overdose and Charlotte, the owner of the camp, raids the cabins looking for drugs, alcohol, and other illegal items.  The counselors are upset about their friends and mad that their stashes have been raided.

Camp continues the next day and things are looking up until two more counselors are found dead.  This time they are found hanging from a zipline and there is no mistaking that it’s murder.  When Charlotte goes to find help it turns out the phone lines are cut, there is no gas in the only vehicle, and the groundskeeper is missing.   Suddenly the fairytale camp has turned into a real Grimm’s nightmare.

Charlotte and the counselors take the kids to the “castle” and block the doors.  They decide to stay there for the next 5 days until the bus arrives to take them to safety.  The only problem is that nowhere is safe and while they think Bruce the groundskeeper is the murderer, they are dead wrong.

The next 5 days becoming a horrifying array of murders, missing counselors, and dead bodies.  No one is safe and it’s determined that the counselors are the ones the murderer is after.  Scott and another counselor, Brynn, start digging through the camps records to see if they can find something that tells them why the counselors are being targeted and who is after them.

When everything becomes clear to Scott it’s a shock to the remaining counselors.  He finally understands why the murderer is killing but will he be able to stop him or her before it’s too late?

I thought this was a well written book.  While there are some horrifying images the details in the story are what kept me reading.  I could picture everything in my head and wanted to find out who the murderer was.  I was shocked when I figured out who it was and why they were murdering counselors.

This is definitely a book that shows the darker side of fairytales but it is fast paced and kept my interest.  It’s a great book for young adults that like murder mysteries.