Two weeks ago I was saying how amazing the weather is and how much I was enjoying recess duty because I had gone out two days in a row with short sleeves and no jacket.  I left for the weekend smiling but then I heard about Hurricane Sandy.  Now I live in Western Maryland and figured that while we would get some rain, it wouldn't be enough for us to have any problems. 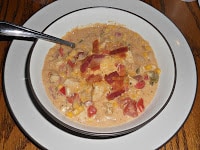 It turns out I was right and wrong.  We didn't end up getting too much rain because I live in the mountains and instead we got 6 incredibly heavy and wet inches of snow!  I was surprised that we received snow instead of rain but it was enough that we were cancelled for several days due to the snow and power outages in the area.  Thankfully we kept our power on throughout the week. 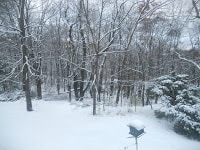 Since I was off for several days, and it was very cold, it was the perfect time to make my soup for this weeks #SundaySupper.  This week our theme was to make a Soul Warming Food.  Nothing warms me up from the inside like a thick and creamy soup.

I decided to make a jalapeno popper chicken chili.  When my husband heard what I was making he was pretty excited as jalapeno poppers are one of his favorite.  I like that the soup is fairly light until the cream cheese is added at the end to make it creamy.  I used light cream cheese which tasted amazing and really added a creamy texture to the soup.

This was the perfect snowy weather soup.  It was spicy, flavorful, and filling.  Paired with a loaf of fresh crusty bread this was all we needed for a complete meal.  The soup itself has both chicken and vegetables in it.  The soup was hearty and warmed us up after a day of shoveling.

1.  In a large saucepan heat the olive oil over medium heat.  Add in the onion, red pepper, jalapeno pepper, and garlic and saute for 5-7 minutes or until soft.

2.  Sprinkle the chicken with the salt and pepper.  Push the vegetables to the side of the pan and add in the chicken.  Lightly brown the chicken on all sides.

3.  Add in the Arizona Dream, cumin, and paprika.  Stir to combine the spices with the chicken and vegetables.

4.  Stir in the tomatoes, chicken broth, cannellini beans, and corn.  Bring to a simmer and cook for 30 minutes.

5.  Add in the cream cheese and stir until it is completely melted, about 5 minutes.  Remove from heat.

6.  Ladle the soup into a bowl and top with crumbled bacon and cheese. 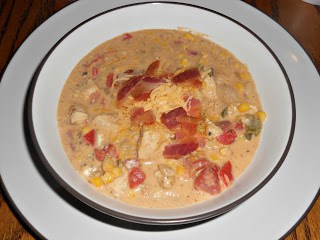 We have over 50 contributors this week, bringing you their best warm you up dishes.  We have everything from stews, soups, main entrees and even some hot drinks and desserts.
Just look at the list below that is coming to the #SundaySupper table this week!