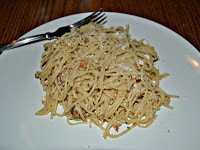 Pesto is one of those things that I really like but it is something that Frank will not eat.  He doesn't like basil so it's something I don't make at home.  When I received Smitten Kitchen's cookbook for Christmas I noticed a pesto recipe that was made with parsley, almonds, cheese, and cauliflower.  I thought this would be a great compromise that both of us with eat.

The sauce was comparable to pesto but with a slightly different texture.  I liked the flavors from the pepper flakes, pecorino romano cheese, and the texture of the nuts and cauliflower.  It was flavorful but not too heavy.  Frank even enjoyed it and thought it was a great alternative to traditional pesto.
As you probably know, I am party of #SundaySupper which is all about sharing supper with your family on Sundays.  The idea is that Sunday Supper starts as one day a week and soon becomes a way of life!  Since it's Monday, I wanted to share this delicious meatless recipe for #weekdaysupper.

1.  In a large pot heat salted water to a boil.  Cook the linguine according to the package directions.  Drain, reserving ¾ cup of pasta water.

3.  Add the garlic, pepper flakes, pecans, cheese, sun-dried tomatoes, capers, and parsley to the food processor and process until the mixture resembles coarse breadcrumbs.  Scrape the mixture into the bowl with the cauliflower and mix well.

4.  Add the oil, vinegar, salt, and pepper to the cauliflower mixture and stir until well combined.

5.  In a large skillet combine the cooked linguine, reserved pasta water, and cauliflower pesto.   Toss to combine and heat for 2-3 minutes. 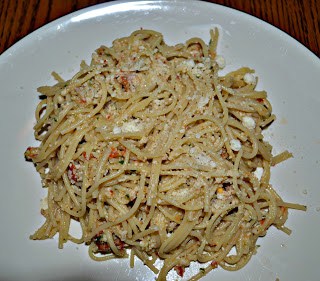