The Lost Heir, the Dragonath Chronicles: Book One

Always a meticulous planner, Darrak Hunter leads a dull life until his dreams become plagued with visions of a peculiar and distant world. Waking up to a brilliant purple sun looming ominously in the sky, Darrak is met by a mysterious violet-eyed sorcerer who whisks him away from the struggling Earth.

Thrown into the clutches of a foreign world where magic is reality and not all is as it seems, Darrak embarks on a journey where he is forced to come to terms with his past and do what he can to shape the future. Accompanied by a talented swordswoman, a prince, and a beautiful young sorceress, he must overcome cunning plots of treachery and betrayal to discover the strength to stand against a destructive black magic and an enemy who is a master at deception. (-synopsis) 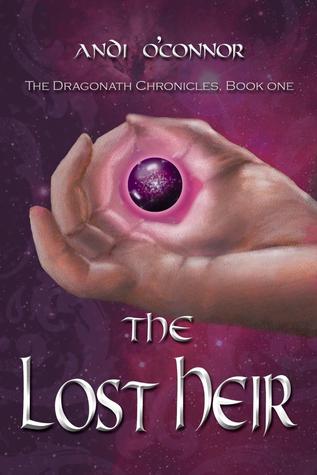 Thousands of years ago a sorcerer sent Haeleena away from her homeland of Mystandia to live on Earth.  It was the only way he could think to hide her and keep her safe from the war that was brewing in their home.

In present day the people of Mystandia are anxious to learn who the new Grand Sorcerer will be.  Mionee, the youngest daughter of the current Grand Sorcerer, hopes it will be her.  In fact she has made a plan in case it isn't her.   She's building an army and she plans to take down anyone in her way even if that includes her brother and her father.   No one can stop her now that she is learning black magic.

On the other side of the palace Ipzaag is silently preparing for the naming of the new Grand Sorcerer.   While he hopes his father will chose him there have been rumors that he will chose his sister instead.  Nevertheless Ipzaag carries on with his day as though it is any other, training with his apprentice.

Darrak lives on Earth.  He's been having weird dreams that seem so real and when he wakes up he remembers every detail.   He's also found that the purple sphere his parents gave him as a child is acting weird.    He assumes he's jut tired from studying too much and thinks nothing of it until he day the Sun changes colors.

That same day the Grand Sorcerer appears to Darrak and takes him to Mystandia.   He explains that Darrak can perform mene, a type of magic and proves it to him on the way.   Once Darrak is in Mystandia he learns the secret of his heritage.   He is a decent of Haeleena.   He is the rightful ruler of Mystandia and will need to take his place once he learns to strengthen his magic.   It's too much for Darrak to take in and he has difficulty with the change in worlds.

Things are heating up as Mionee and her warriors learn of Darrak's heritage.   Mionee will stop at nothing to eliminate him and take her place as the next Grand Sorcerer.   She believes she has the power and the warriors behind her to do it.   That is, until she learns that a Chosen has appeared in Mystandia.   There hasn't been a Chosen in Mystandia in thousands of years so why is one appearing now?   A Chosen is a person who doesn't need a kraylock to do magic.  They are rare and powerful people.   After the Chosen appears there seems to be a Dreamweaver and a Dreamseer as well.

Suddenly Mionee isn't so sure she can win the war.    The Grand Sorcerer and his son are not sure they can win either.   It will be a battle of magic that Mystandia hasn't seen in thousands of years and the winner will become the new Grand Sorcerer and rule all of Mystandia.   Who will come out on top?

When I first started the book I had some trouble keeping the characters straight.  There were so many of them with so many unusual names.  However, the more I read the easier it became as the characters started to take shape in my mind.  I really came to care about the different characters.

I did not like Mionee.  I felt that she was a spoiled brat who wanted everything her way or no way.    I spent the entire book hoping she wouldn't come out and top and cheering every time someone stopped one of her soldiers.  I really liked the Grand Sorcerer, Ipzaag, and Darrak.   They are all strong men with powerful magic who only want what is best for Mystandia and for the people the care about.   They would each put down their own lives to do what is right.

While the book started off a little slow because of the character development it soon became fast paced as the war was beginning.   There was a lot going on and I wanted to keep reading to see what would happen next.

I did think that at some points the book went a little too fast.  Poor Darrak got pulled into a world he didn't know existed, told he was the rightful heir, and then was made to go on the run from warriors all in the span of 24 hours.

Overall I think that this is a great book for anyone that enjoys fantasy series.  I'm looking forward to reading the second book in the series so I can find out what happens to all of the characters.