I had heard many wonderful things about the book Madame Tussaud: A Novel of the French Revolution by Michelle Moran.  I typically do not get into the historical fiction books as they are not my type of book.  However, I have always been interested in Madame Tussaud and how she came to build her famous wax museums so I decided to give the book a chance.  I am so glad I did! 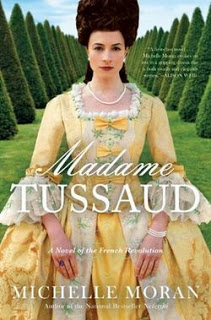 Madame Tussaud is set during the French Revolution.  It focuses on Marie Grosholtz, who later became Madame Tussaud,  as a young woman worked as a wax sculpture for her uncle's wax museum, Salon de Cire.  Together Marie and her uncle make wax figures of the important political figures of the time.

Marie becomes wrapped up in the revolution as the people begin asking her to make wax figures of the men and women joining the revolution.  She is in constant conflict as she likes and appreciates the current monarch.  She has grown fond of the royal family through time well spent with the King's sister.

Things become worse when the revolutionaries begin demanding Marie make wax heads of the traitors whom they have killed.  The Reign of Terror has officially begun and the Grosholtz family is in the middle.  The story goes through the uprising of the people, the revolution itself, the fall of the monarch, and the aftermath.  Throughout it all Marie is an integral part of the fight and stays strong through her work, the terror, and the aftermath.  After it's all over she rises up to become Madame Tussaud of the famous wax museums.

Throughout the book Michelle Moran keeps the story going with glances at the royal family, glances at the revolution, and yet still sticks with Marie's family.  It's a strong, powerful book.  Even though it is fictional, many of the details of the French Revolution are true and gave me a much clearer picture of this time in history in France.