Moloka'i, a novel of historical fiction, was written by Alan Brennert. We are introduced to seven-year-old Rachel Kalama, the youngest in her family. She is surrounded by a loving family who begin to greive when her Uncle Pono is found to have leprous sores. He is sent to the Kahili hospital in Oahu and then goes on to the Kalaupapa leper colony on Molokai. Not long after he leaves, young Rachel discovers a sore on her own leg. During a fight with her older sister at school her sister reveals that Rachel is a leper. Rachel is immediately removed from her home and sent to Molokai.

What could be a horrific experience turns into a story of happiness, love, caring, and growth. Rachel has an uncle who lives nearby and visits her. She becomes friends with a nun who cares for her at the girls’ home. Even her father makes the expensive, treacherous trip to Molokai several times to visit her. While many of her friends become sick and die, Rachel’s symptoms remain mild throughout her childhood.
As an adult, Rachel is able to maintain her own home in the Kalaupapa settlement and eventually meets Kenji, a fellow victim of leprosy. The two quickly fall in love and marry. Soon after their marriage they have a beautiful, healthy baby girl. Unfortunately their joy quickly turns to sorrow when they realize they must give her up for adoption so that she may have a life outside of the leprosy colony.
Years later Kenji gets into a fight that ends his life. Rachel grieves for him daily until she receives news she never thought would come: she’s cured; she may leave Molokai. She leaves Molokai in search of the family who never contacted her once she left for the leprosy colony. While hesitant, she also searches for the daughter she gave up over 30 years ago.

This story is a journey of Rachel’s life with leprosy. It’s a glimpse into the life of many lepers in Hawaii in the early 1900’s. There are many times when Rachel and the others begin to feel sorry for themselves and their fellow friends at Molokai, but there are just as many happy times. It’s a beautiful story of a little girl who overcomes her disease to make it back to the family she left 60 years before. The story is inspirational and uplifting. This book is one that I won’t soon forget.
I give this book 5 out of 5 stars. 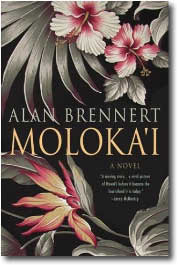