Pumpkin Spice Donuts take a delicious baked cake donut flavored with pumpkin and spices and glaze it with chocolate and sprinkles for a tasty fall breakfast or dessert!  This recipe originally published in October 2011. 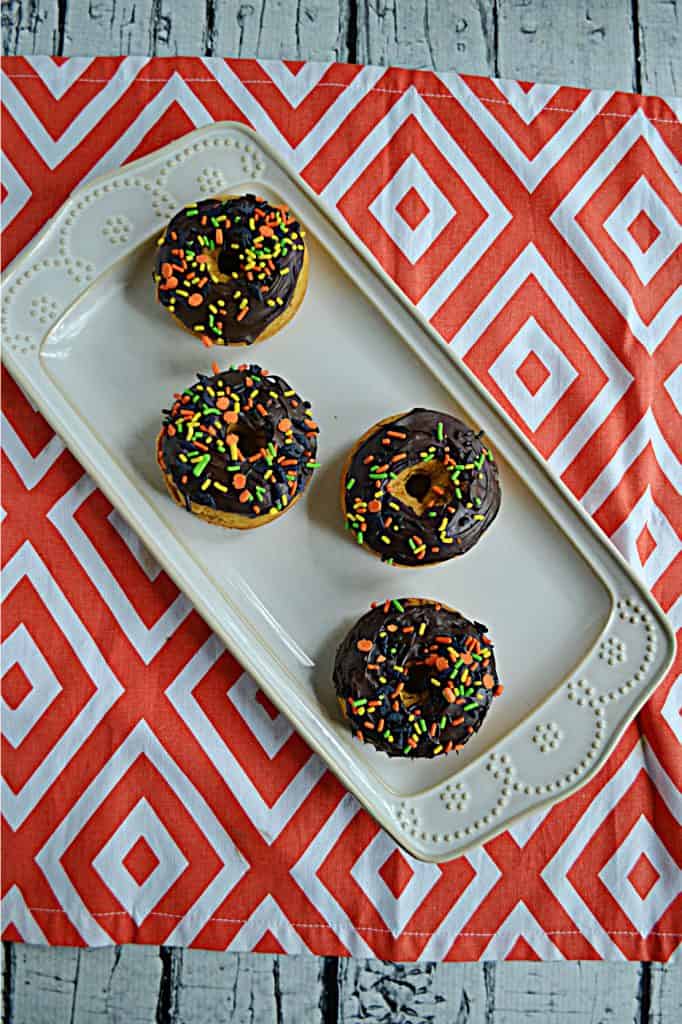 Nothing says fall like pumpkin and apples.  I feel like I try to fit all of my pumpkin and apple recipes in to September, October, and November so be prepared to see a lot of them this fall!

I started making baked donuts about 12 years ago and I really can't get enough of them.  I'm not a huge fried donut fan so finding a donut that's more cake like and that doesn't hold a ton of oil is much more appealing to me.

I've been wanting to make pumpkin spice baked donuts because they just sounded like they would be a great fall breakfast with a mug of hot coffee.   Plus putting a chocolate glaze on top is a fun pairing. 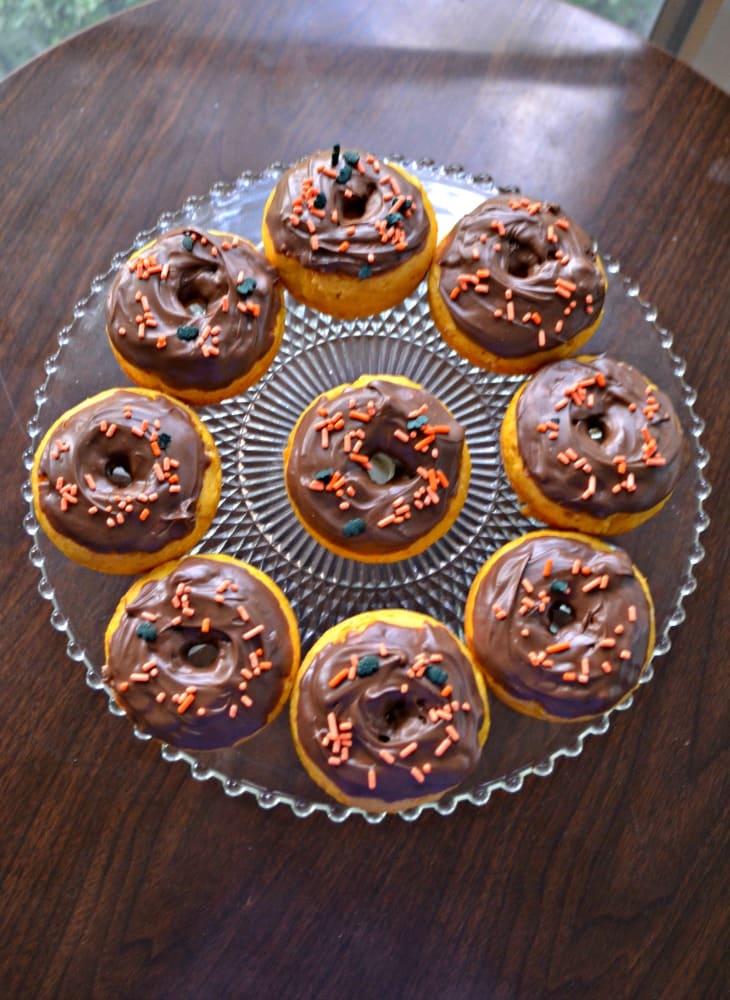 To make the donuts preheat the oven to 400 degrees.   Spray a donut pan with cooking spray and set aside.

In a large bowl combine the flour, baking powder, pumpkin pie spice, cinnamon, and salt.  Mix well and set aside.

In a medium bowl cream the butter and brown sugar together.  Add in the eggs and vanilla and mix well.

Add the pumpkin and milk and mix until smooth.

Add the pumpkin mixture to the flour mixture and mix until a thick dough forms.

Place the batter into a piping bag and pipe into the donut pan.

Bake for 10 minutes.  Remove from oven and cool 5 minutes then remove the donuts from the pan and cool completely.

To make the chocolate glaze combine the vegetable oil and chocolate in a microwave safe bowl and heat in 20 second intervals, stirring after each heating, until the chocolate is melted and smooth. 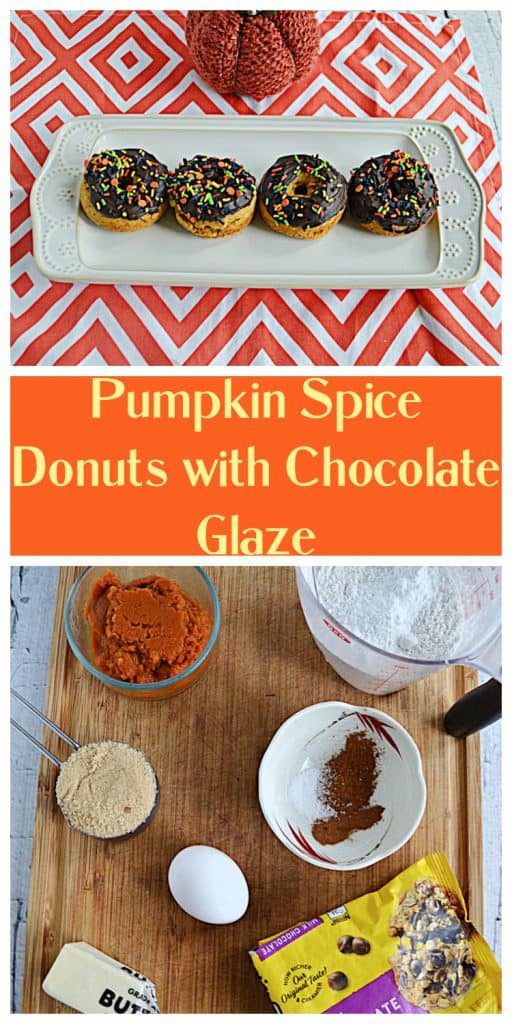 For several years pumpkin has been difficult to find in the market in the fall.  Unfortunately it once again has been hard to find at the grocery stores in my area.  I checked 3 different stores and none of them had pumpkin.  I finally found someone unloading two cases of pumpkin on a Sunday morning and stocked up to get me through the next few months.

The first thing I made with my pumpkin were these pumpkin spice donuts.  They made the whole kitchen smell good as they were baking.  My son helped me make them and when we poured the pumpkin pie spice into the bowl he said, "Whoa, what is that smell?" 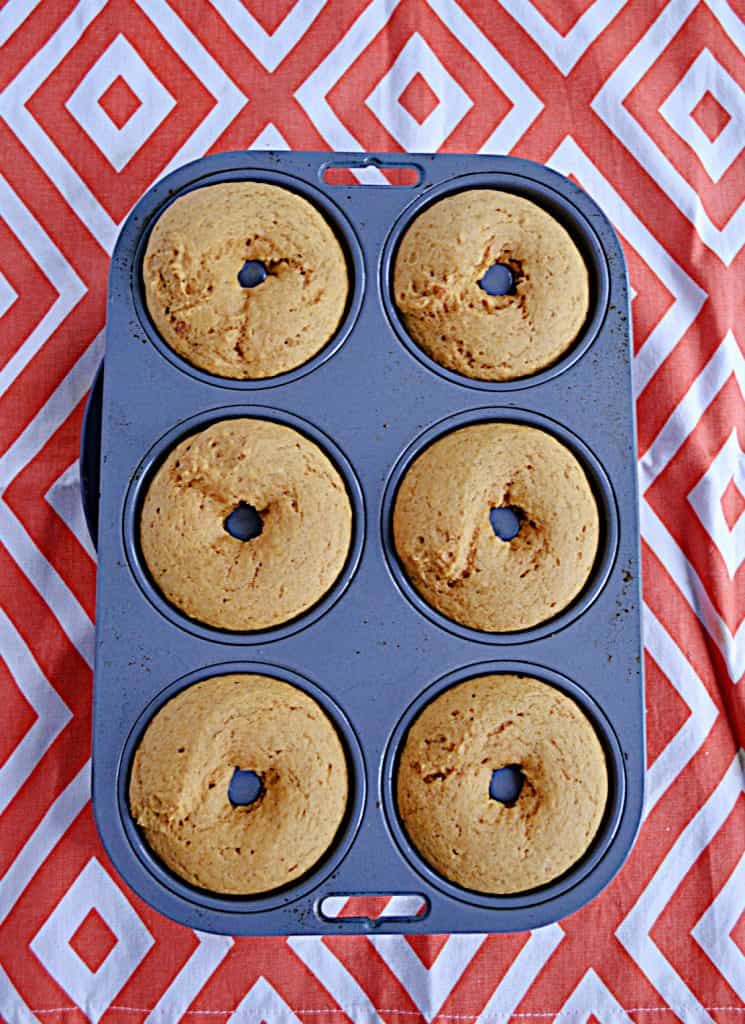 Do I need a donut pan to make this recipe?

If you want them to look like donuts then you really need a donut pan.  They are cheap to buy and they last a long time.  I have these ones and have been using them for 12 years and they still look and work great.  However, you can bake these in a muffin tin but they will be donut muffins instead of simply muffins.  They will taste similiar but they won't look like a donut.

I don't have pumpkin pie spice, can I use something else?

Can I fry these instead of baking them?

No you really can't.  They won't work as traditional donuts because they are made to be baked and not fried.

Do I have to glaze them with chocolate?  I don't really like chocolate and pumpkin.

No!  There are definitely other options out there.  The easiest would be a simple powdered sugar and milk glaze with a little vanilla and a little cinnamon in it.  Just dip the donuts in and let the glaze harden on top.  Another tasty option would be a caramel drizzle or a butterscotch glaze on top.   Have fun with these! 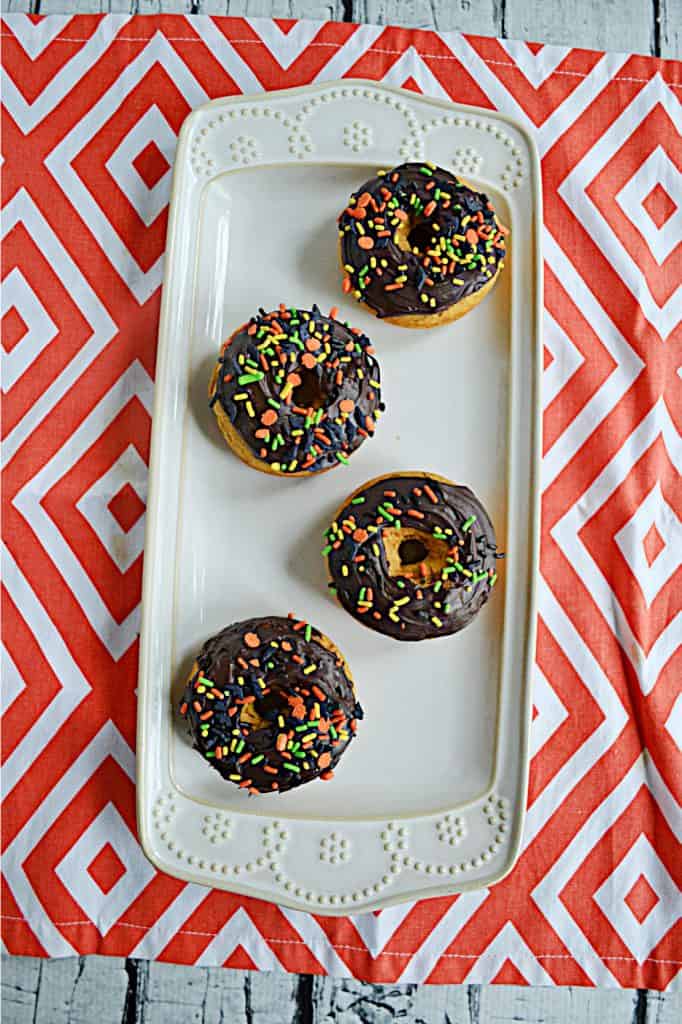 We couldn't wait to eat these donuts and for good reason.  These donuts were amazing!  The texture was cake like, they had a light pumpkin flavor, and were perfectly spiced.
The chocolate glaze on top with the sprinkles only made the donuts better.  My husband was thrilled when he saw me making them as I haven't made donuts in a while.  Plus because they are baked instead of fried they are much healthier then donut store donuts.

If you’ve tried my Pumpkin Spice Donuts with Chocolate Glaze or any other recipe on Hezzi-D’s Books and Cooks please take a minute to rate the recipe and leave a comment letting me know how you liked it. I love hearing from you! You can FOLLOW ME on:

Recipe adapted from The Brewer and The Baker 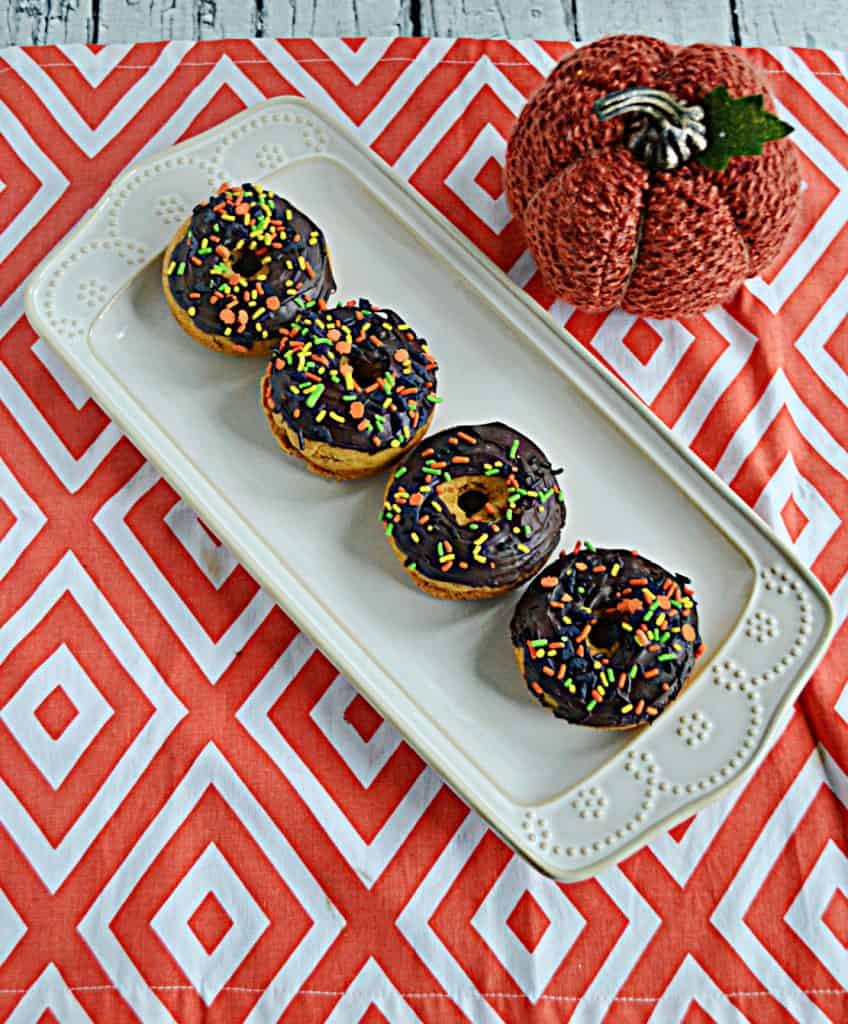