I still find it surprising that my little brother likes to cook and is actually pretty good at it.  He is 30 years old but up until he was 25 or 26 he went to my parents house 4 or 5 days a week to eat dinner with them.  He then had either a frozen meal or a peanut butter sandwich for lunch everyday. 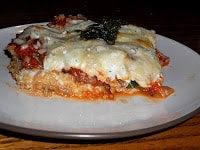 Nowadays he is cooking all types of different foods and actually coming up with recipes on his own.  In fact, one day last year we went shopping in the Strip District and then made a meal together for my parents.  So when he told me about his quinoa lasagna I was game to try it. We were going to make it while I was in Pittsburgh over the summer but we ran out of time.

It's been a rainy, cool fall so far this year and I've been looking for a warm and comforting dish.  This week #SundaySupper is all about comfort foods so my brother's lasagna definitely fits in with the theme. 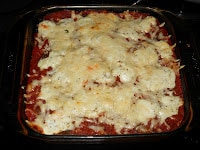 So after deciding to give my brother's recipe a try he sent it to me and I made a few changes, including cutting the recipe in half so that it fit in an 8 x 8 baking dish.  His original recipe just had kale in it but I had several cups of fresh spinach I needed to use up so I used both in my dish.

The lasagna smelled amazing.  The combination of the vegetables, quinoa, and seasonings was fragrant and inviting.  It looked pretty coming out of the oven as well.  I did have some trouble getting it out of the pan because the bottom layer was quinoa, but finally managed using a spatula and a wooden spoon.  I thought the flavors and texture of the lasagna worked well together and were a great twist on classic lasagna.  I didn't miss the noodles at all because the quinoa was filling and starchy.  It was warm, gooey, and comforting on a cold fall night.  I would most definitely make this again so thank you to my little brother for the great recipe!

1.  Cook the quinoa in the vegetable broth per the instruction on the box.

2.  While the quinoa is cooking, heat the olive oil in a large skillet over medium high heat.  Add in the garlic and onion and saute for 3-4 minutes. 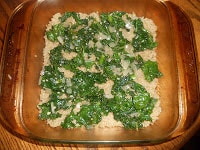 3.  Add the kale and spinach to the onion and garlic and cook until just wilted.  Sprinkle with rosemary, cayenne, pepper, and salt.  Mix well and remove from heat.

5.  In a small mixing bowl combine ½ cup mozzarella cheese, ¼ cup Parmesan cheese, the ricotta cheese, and the sour cream.  Mix in the parsley and oregano.

8.  Bake for 30 minutes or until the cheese is melted and beginning to brown.  Remove from the oven and allow to cool for 5 minutes before cutting. 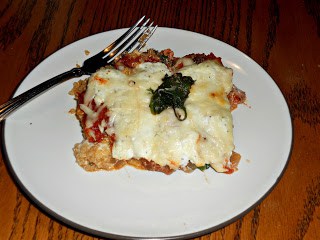