I love being able to shop for fresh vegetables at the farmer's market in the summer.  Not only is the produce super fresh, the prices are often cheaper then at the grocery store.  Whenever I look through my cooking magazines in the summer, I rip out any dish that featured vegetables.  During the winter I have such a hard time with vegetable side dishes but in the summer I can't get enough of them! 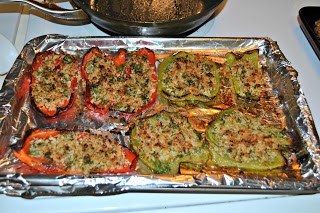 This side dish features one of my favorites vegetables.  Bell peppers are something I never ate as a kid and didn't even eat in college.  I think my husband finally introduced them to me and I've been eating them ever since.  While I'll eat them raw in a salad, I really prefer them cooked.  This recipe has them roasted in the oven then flipped over and topped with seasoned breadcrumbs and roasted for a longer period of time.

The peppers get caramelized and have so much flavor to them.  The breadcrumbs brown in the oven and taste wonderful seasoned with parsley, oregano, garlic, salt, and pepper.  It was a delicious side dish that looks great too.

2.  Combine the peppers, 2 tablespoons of olive oil, salt, and pepper in a bowl and toss to coat.  Place the peppers, skin side up, on the baking sheet.  Bake for 25 minutes.

4.  Remove the peppers from the oven, flip them over so they are skin side down, and divide the breadcrumb mixture evenly between the peppers.

5.  Put back in the oven and bake for 20-25 minutes or until they peppers begin to brown. 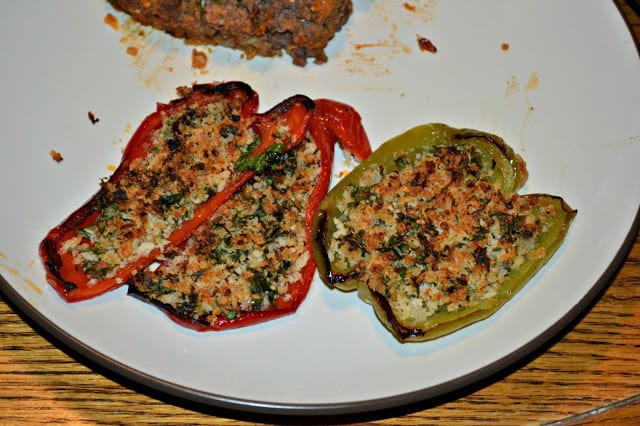