The holidays are quickly approaching and that means I need to start thinking about my Thanksgiving dinner menu.  Every year there are three traditional items that are always including at Thanksgiving dinner; turkey, mashed potatoes, and stuffing.  The other dishes seem to change but these three are staples at our holiday meal. 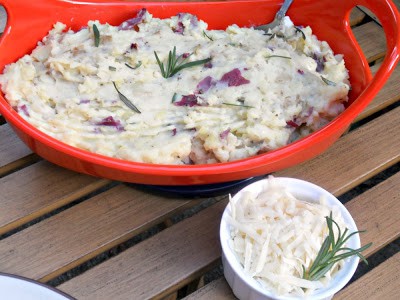 I like to try different versions of mashed potatoes and stuffing each year so that my family gets a taste of the traditional but with a twist.  This year Unilever Spreads and The Clever Girls Collective have come together to share side dishes using Unilever Spreads instead of butter.  This was a very easy challenge for me because we use I Can't Believe It's Not Butter! daily at our house.  We enjoy using this spread because it contains less saturated fat then butter, has no cholesterol, and no trans fat. 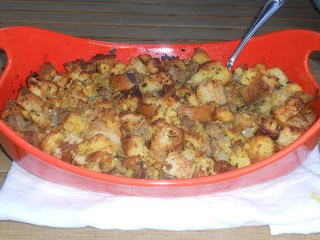 I started out making the stuffing because it always takes longer then the mashed potatoes.  I use a combination of white bread and cornbread but it's really all about your own preference.  I loaded the stuffing up with onions, celery, garlic, and sausage sauteed in I Can't Believe It's Not Butter!, then threw in some fresh sage and parsley from my garden.  It turned out delicious.  The stuffing was crispy on top and soft in the middle with a hint of spice from the sausage and plenty of flavor from the vegetables and herbs. 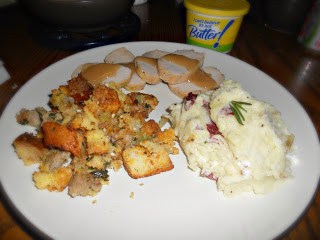 The mashed potatoes turned out well too.  Again I used a combination of russet potatoes and red skinned potatoes.   This simple recipe mashes the potatoes along with I Can't Believe It's Not Butter!, milk, garlic, fresh rosemary, and cheeses.  The flavors burst in my mouth and the dish was beautiful with the bits of red skin peaking out from the mounds of fluffy white potatoes. 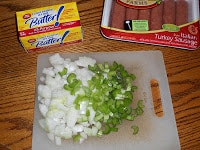 2.  Place the bread cubes on a cookie sheet and sprinkle with salt and pepper.  Bake for 25 minutes, turning twice, until the bread is lightly browned.  Remove from oven.

3.  In a large skillet over medium heat melt the I Can't Believe It's Not Butter!  Add in the onions, celery, and garlic and saute for 10 minutes.

4.  Move the vegetables to the sides of the pan and add in the crumbled sausage.  Cook for 5-7 minutes or until the sausage is cooked through.

5.  Add in the sage and parsley and cook for 1 additional minute.  Remove from heat.

6.  Pour the browned bread cubes into a baking dish.  Add in the sausage and vegetable mixture and toss to combine.

7.  In a small bowl beat the egg.  Add in the chicken broth and mix well.  Pour over top of the stuffing and mix until the breadcrumbs are moist but not soggy.

8.  Cover the baking dish with foil and bake for 30 minutes.  Remove the foil, sprinkle with the paprika, and continue baking for 20 minutes.

9.  Remove from oven and serve immediately. 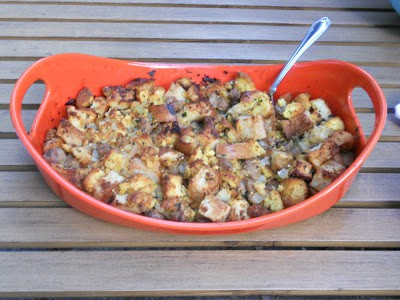 1.  Place the potatoes in a Dutch Oven and cover with water.  Bring the water to a boil.  Reduce heat to medium and cook, uncovered, for 20 minutes.

2.  Drain the water and return the potatoes to the pan.  Mash the potatoes.  Add in the I Can't Believe It's Not Butter! spread, sour cream, and milk, mixing well. 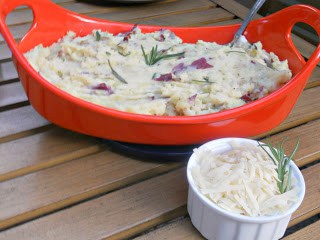 3.  Stir in the garlic, rosemary, salt, pepper, and half of the cheeses.  Sprinkle with remaining cheeses and serve immediately or pour potatoes into a baking dish and keep warm in the oven until time to serve. 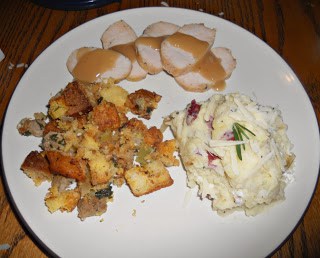