Teaser, the sequel to Inside Passage, takes Corey and Abe into the interconnected worlds of private school kids and the runaways who roam Seattle's streets. Billy attends the Olympic Academy, where two friends, Maisie and Aaron, are experimenting with sex and drugs. They've become close to Star, a streetwise seductress who leads them down a treacherous path. Despite the best efforts of Abe and Corey, Maisie is abducted by the diabolical “Teaser,” a man determined to take revenge on her father, his former cellmate. Teaser is a mystery to everyone except Abe and Corey, who alone realize what they must do to rescue Maisie. They contrive a plan that shocks even them.  (-synopsis) 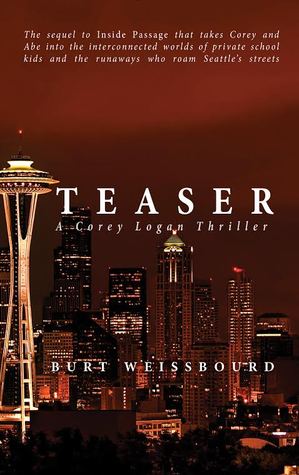 Star is a twenty something who has taken up with Maisie and Aaron.  She is introducing them to sex, drugs, and other things they haven't been exposed too.   Maisie and Aaron start skipping school to spend more time with Star.   Only Star has an ulterior motive for befriending the pair.  Her friend "Teaser" is interested in Maisie.  He shared a cell with her real father in prison and when he looks at her all he sees is revenge.

Meanwhile, Corey is busy working with one of the young women she found.   Corey finds runaways for a living and she's very protective of the children she recovers.   She's having a bad day when one of the girls shows up with broken ribs, black eyes, and is battered all over.  Corey takes it upon herself to try and help the girl and get her away from her abuser.

Abe is a therapist.  He is helping to treat Maisie with her anxiety and difficulties at home.  However, Maisie begins talking to him about the sex and drugs.   When Maisie misses her appointment for her weekly drug testing Abe becomes worried.  He thinks something may have happened to her and it turns out he's right.

Billy is Corey's son.  He's also friends with Aaron and Maisie.   He's concerned that Aaron and Maisie are into drugs and confides in his mother about the problem.  When his mother goes to Aaron's dad, Billy is angry that she broke his confidence.   He begins to turn away from her again.

The characters in this book are all interwoven into one bigger story.  The story revolves around Teaser, a man who just got out of jail.  Teaser was in jail because he enjoyed young girls way too much.  While in jail he became even worse.  He would injure himself on purpose but no longer seemed to feel anything.  Abe has a bad feeling about Teaser being out of jail and when Maisie comes up missing he's afraid of where she might have gone and who might have taken her.

This is the thrilling sequel to Inside Passage that will keep you on the edge of your seat throughout the story.  Pay close attention because every character plays an important role and has important information.  The ending comes to a dramatic conclusion as the characters finally clash in a crazy twist of events that go back more then 20 years.