Through the Portal by Justin Dennis is the first book in a fantasy trilogy for young adults.  The story opens with Jem and Oliver, best friends who are attending summer school.  Jem is smart, shy, poor, and gets teased a lot.  Oliver is popular, rich, and has a wild streak.  Together the two of them go off on crazy adventures that Oliver dreams up.  One night they sneak off and go scuba diving in the lake only to be sucked through a portal into another world. 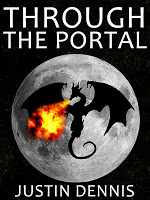 The other world is anything but ordinary.  In the first hour they are there the boys are chased and almost killed by a fire breathing dragon.  They are only saved by a farm girl named Sierra who was nearby and used her magic to save them.  Oliver and Jem soon realize that in addition to the magic and fire breathing dragons, they've landed in a world that is on the brink of war.

Sierra tells the boys about the nasty Veroci Regime that  has been taking away The Souls from the six regions of her world.  The Souls are what powers the magic of the people and the Regime is taking them in order to limit the magic of the people and strengthen their own magic.  Jem, Oliver, and Sierra want to join the revolution but in order to do so they have to make it to one of the far away regions while at the same time avoiding both the fire breathing dragon and the Regime.

I found the first half of the book to be slow moving and fairly unbelievable, even for a fantasy novel.  It was hard to imagine that two young teenage boys would barely have a second thought about their families as they are thrown into a world parallel to Earth.  While I enjoyed getting the background on the characters, I found them to be behaving in ways that didn't follow their personalities.  There were also several spelling, grammatical, and punctuation errors that detracted from the story.

The second half of the book was much better.  It was fast paced with a lot of action.  Jem and Sierra meet up with many different characters and begin strengthening their magic in order to defeat both the dragon and the Regime.  The book ends with the defeat of one of these things but not the other which leaves an opening into the second book in this trilogy.

In all I thought the book was average and I probably will not read the other two books in the trilogy.  However, I do think that middle school and high school children would really enjoy the adventures of Jem in this book and that they would continue reading the trilogy.  This book is definitely geared to teenagers.

I give this book 2 out of 5 stars.
**I was given a copy of this book for review by the author**