Make a batch of vanilla Vampire Donuts with edible eyes, almond fangs, and fake blood for a fun and tasty Halloween treat. 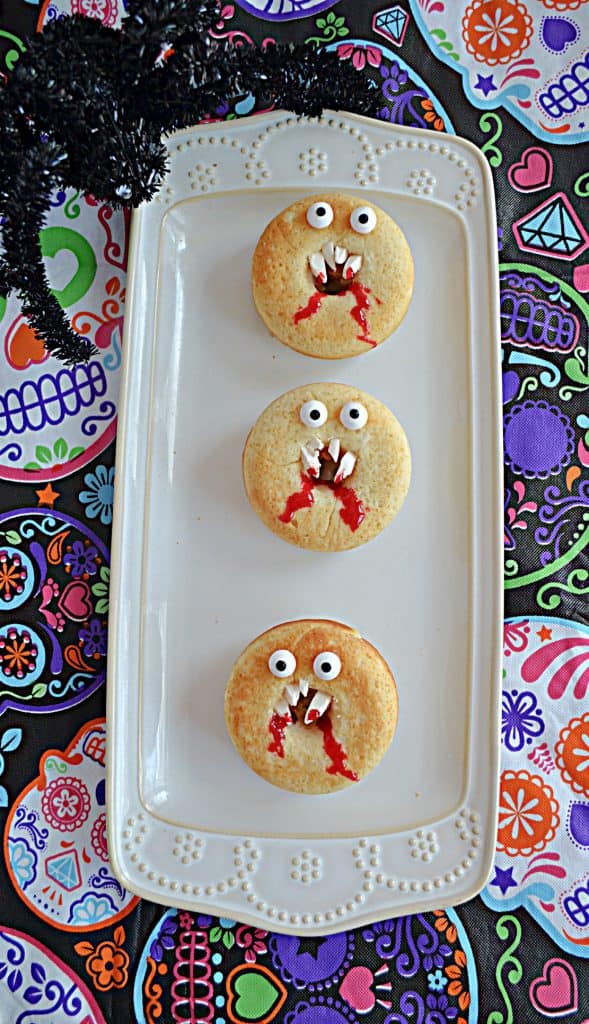 Halloween is right around the corner and I've been making all the creepy things.  This year I've made a spooky Ghost Cake, easy Frankenstein cupcakes, and a Vampire's Kiss Cocktail.   Of course there's always room for more Halloween!

I've been in a donut making mood lately so I went looking for fun and scary Halloween donuts.  The ones that really spoke to me were the Vampire donuts.

I asked my son if he wanted to make donuts and he was totally in.  I had some trouble figuring out how to add the vampire teeth as all the recipes I saw were simply for decorating large store bought donuts that could fit fake plastic vampire teeth in them.   After experimenting with a few things I figured out what to use. 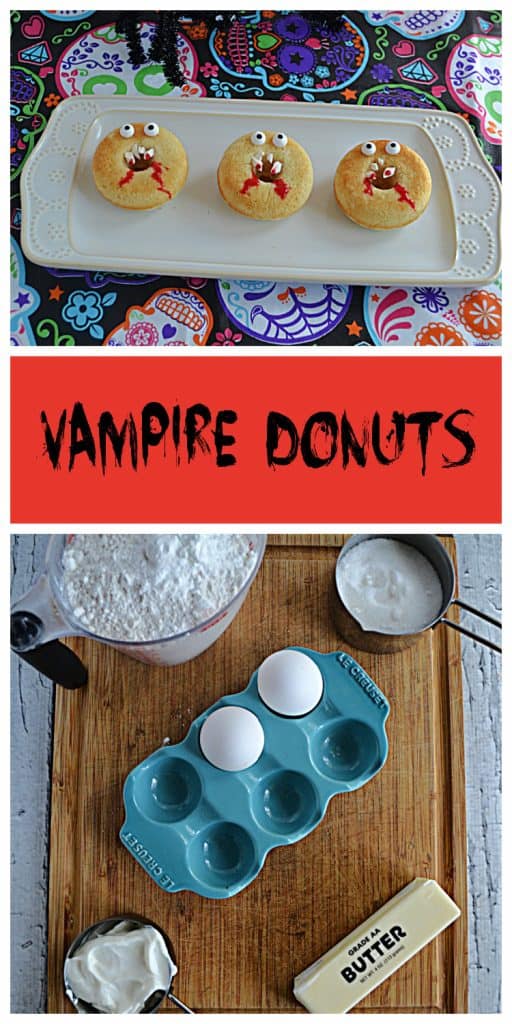 The base of my donuts are a classic baked vanilla donuts. I used vanilla because I knew the fake blood would show up fairly well on these.   You can certainly use your favorite donut recipe in place of my vanilla one.

I baked up a batch of these donuts and let them cool on a wire rack.   While they were cooling I whipped up a small batch of royal icing to help the eyes stick to the donuts but you can use prepared frosting if you have some.

After sticking the eyes on it was time for the almonds.   I broke the almonds so that I could have some in the top of the donut hole and some on the bottom.  I simply pressed them into the donut.  I had difficulty with a few of them sticking and put a dot of royal icing on the end of them to hold them into place.

I've never made donuts.   Can I buy store bought ones and just decorate them?

I can't have nuts, is there a substitute for the teeth?

You can use pumpkin seeds, white modeling chocolate, or even mini marshmallows cut into fangs.  Get creative!

I noticed there isn't a frosting or glaze on these donuts.   Can I put one on the donuts?

Yes!   I would go with a basic powdered sugar and milk glaze.   Just mix powdered sugar with milk and vanilla and mix until smooth.  Dunk the tops of the donuts into the glaze and put them on a wire rack to let the excess drip off.

I can't find edible eyes, is there something else I can use?

You can use buttercream frosting and just pipe on white eyes with a dot of black in the middle.  This is a super easy way to make the eyes. You could also make royal icing and pipe the white of the eye with a dot of black and let them dry over night to make your own edible eyes that you can store for later! 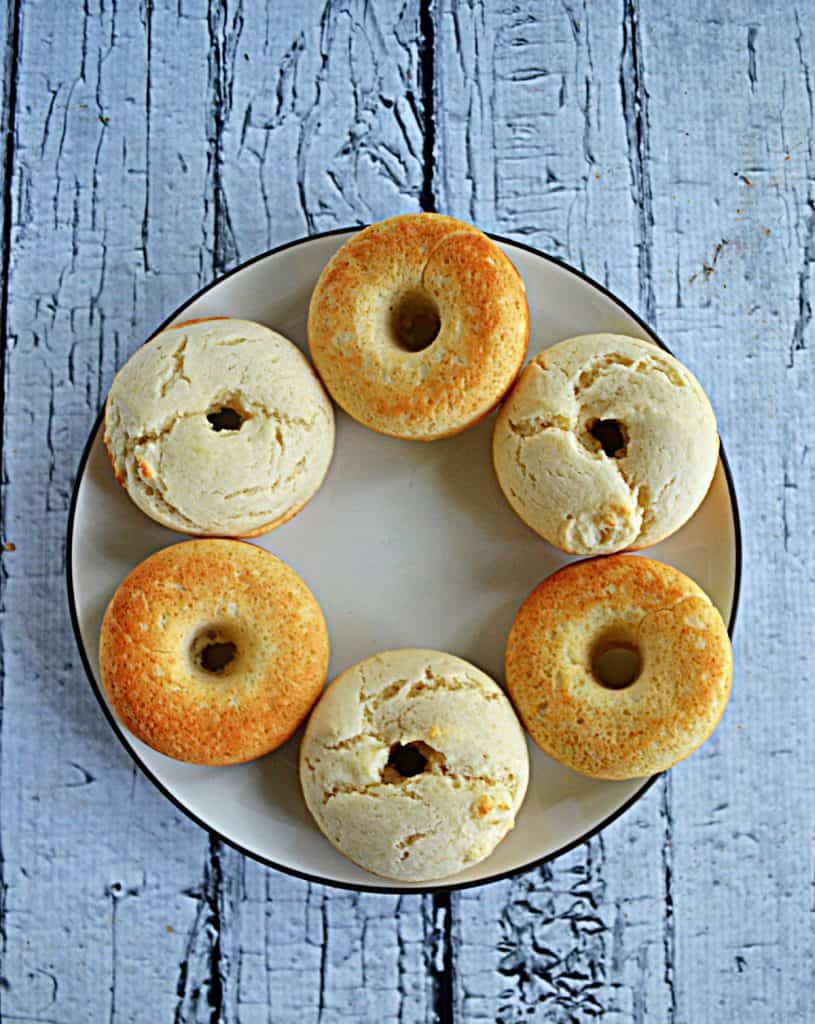 Finally I made the fake blood.  It's simply corn syrup and red food coloring.  It makes a nice consistency and drips like blood.  I used a toothpick to place it on the end of some of the teeth and then to drip it from the vampire mouth.

You can also put a splatter of the blood on the donuts using a clean paintbrush dipped in the fake blood and splashing it.  Have fun with it!

If you’ve tried my Vampire Donuts or any other recipe on Hezzi-D’s Books and Cooks please take a minute to rate the recipe and leave a comment letting me know how you liked it. I love hearing from you! You can FOLLOW ME on: 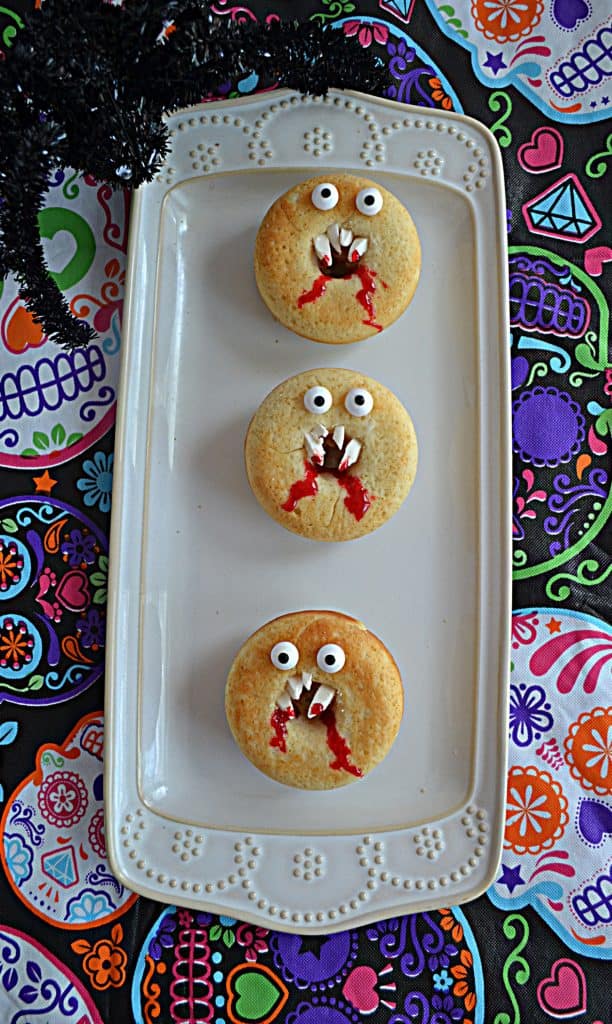