Debbie Matenopoulos, the first member of her family born in America, grew up in a traditional Greek household, eating delicious, authentic Greek cooking that her family had passed down for generations. 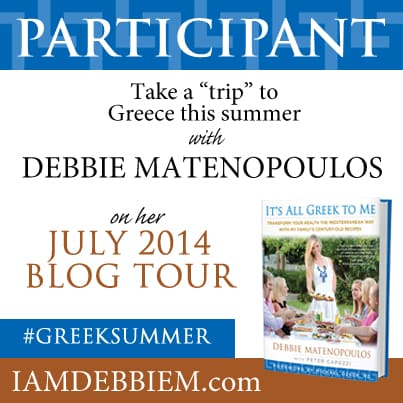 By the time Debbie had started her television career in New York on The View, she began eating a standard American diet. But despite carefully limiting how much she ate, she found herself gaining weight and lacking energy. As Debbie’s career as an entertainment news reporter and television host on BS, MTV, E!, and other networks had her constantly on the go, she was grabbing whatever food was readily available. It was only when she returned to her traditional Greek diet that she found herself easily—and healthily—realizing her natural weight and regaining her natural energy, stamina, and physique.

Now, in It's All Greek to Me, Debbie shares 120 of her family's traditional Greek recipes and adds her own touch to make them even healthier and easier to prepare. 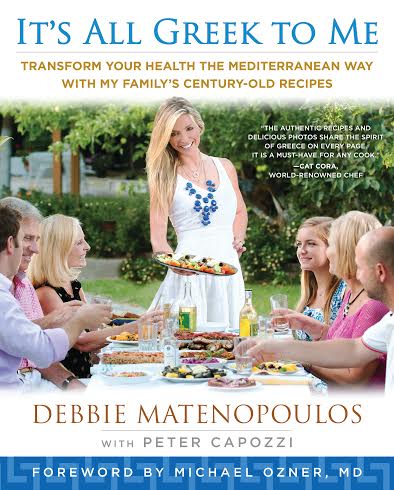 After tasting Debbie’s dishes, such as her mouthwatering version of Spanakopita (Spinach Feta Pie), Kalamaria Kaftera (Spicy Calamari), her family’s secret recipe for Baklava, and, of course, Arni kai Patates (Classic Roasted Leg of Lamb with Potatoes)—you’ll be amazed these delicious foods are good for you. With a foreword by Dr. Michael Ozner, one of the nation’s leading cardiologists, the recipes in It’s All Greek to Me adhere to the healthiest diet on the planet: the traditional Mediterranean Diet. Modern science is catching up to what Greeks have known for millennia: health comes from eating natural, whole-food ingredients that haven’t been processed or pumped full of hormones, antibiotics, or preservatives.

Let It’s All Greek to Me bring your friends and family together to share in the experience of a Greek meal and way of life. Opa!  (-synopsis)

It's All Greek to Me is a wonderful cookbook filled with delicious recipes and great color photos.   I really like that the photographs aren't just of the food.   While there are plenty of drool-worthy food photos, the author also included photos of the markets where she purchases her ingredients, a few animals, and several of her family.   It helps to get an in depth look at both the food and the author.

In the front of the book, before the recipes, are several different sections.   The first is a section about the author and her family and how she came to love Greek cooking.  Then there is a section about Greece.   Next comes a section on how to use the cookbook.  I know what you are thinking, you look for a recipe and cook it.   You are right and wrong, the author gives some tips on how to properly use this cookbook.  The last section in the beginning of the book is all about cooking tips and the Greek pantry.

The book is divided into several sections including appetizers, sauces, soups, seafood entrees, vegetarian main dishes, vegetables, sweets, and extras.   In looking at this cookbook there are several recipes I have marked to make as soon as I can.   I can't wait to try the Greek Bruschetta, Savory Cheese Pie, Spaghetti with Greek Yogurt, Greek Meatballs, and the Sour Cherry Summer Dessert.   They all look and sound incredible.

I found that most of the recipes included recipes that were easy to find in my local market.  Many of the recipes were also easy to make and didn't take a lengthy period of time.   I really enjoyed not only looking through the recipes but reading the stories that went along with them.  I think this would be a great cookbook for anyone that enjoys Mediterranean and Greek cooking. 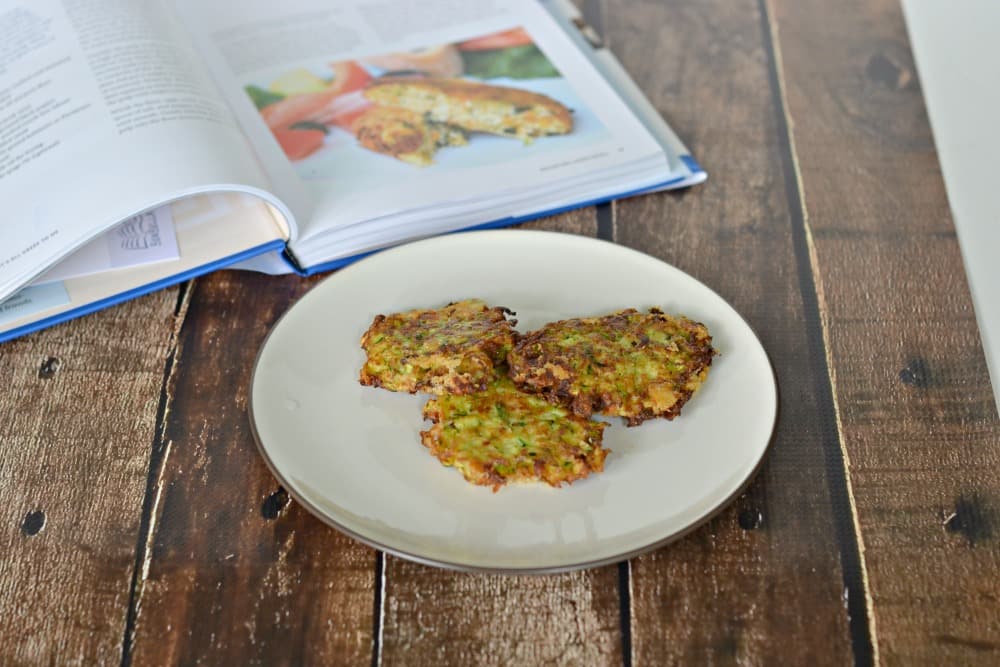 This dish is traditionally made to use up the zucchini pulp that is left when making Kolokithakia Gemista me Kima (Stuffed Zucchini, page 202). Greek families feel it is disrespectful to waste food, so they always find a way to use every part of the fruit, the vegetables, or even the animals they are consuming. These fritters are charmingly rustic, so don’t worry if they are not perfectly round. 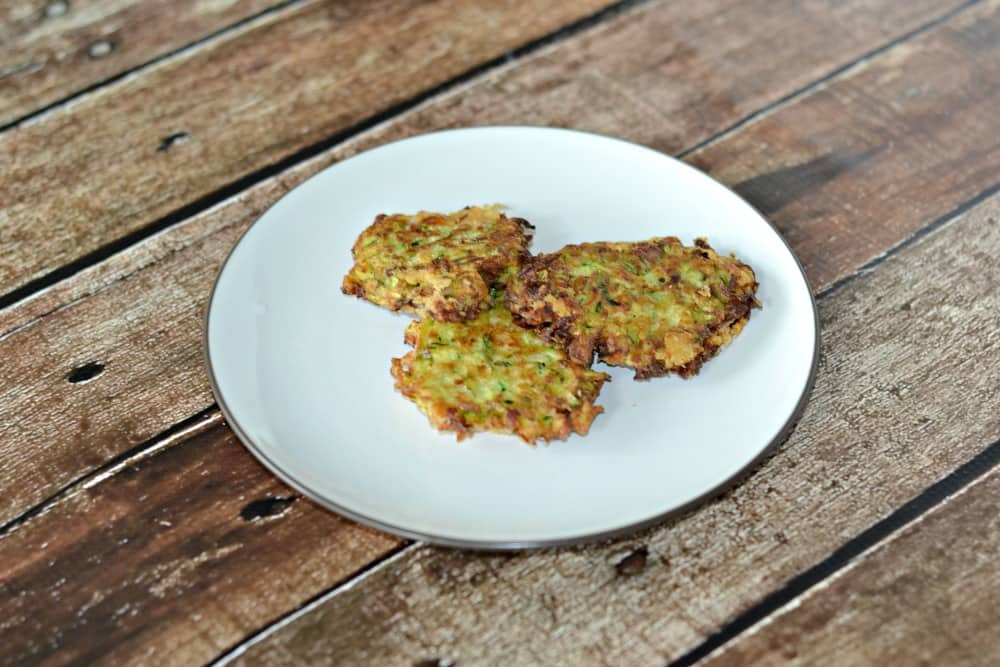 Cut the zucchini in half down the center into half cylinders. With a small teaspoon or a grapefruit spoon, hollow out the zucchini skins by scooping out all the pulp, leaving about ⅛ inch of zucchini intact next to the skin. Leave the bottoms intact so that you are left with a “zucchini cup” that can be stuffed later. Take care not to crack or puncture the skins. Cover the zucchini skins and reserve in the refrigerator to make Kolokithakia Gemista me Kima.

Transfer the pulp to the bowl of a food processor or high-performance blender and pulse a few times to chop finely. Place the finely chopped zucchini pulp into a colander and toss with ½ teaspoon of the salt. Cover the zucchini with a plate and put a weight on top (such as a large can of tomatoes). Drain for 10 minutes, briefly rinse, then squeeze as much moisture as possible from the pulp with impeccably clean hands.

Whisk the flour, eggs, mint, remaining ½ teaspoon of salt, and pepper in a large mixing bowl until smooth. Gently fold the drained zucchini pulp into the flour mixture along with the feta and kefalotiri or Parmesan cheese (if using). Stir until the mixture resembles a thick batter.

In a deep skillet or Dutch oven set over medium heat, heat about ½ inch of the oil until it shimmers (see tip, page 42). Working in batches if necessary to prevent overcrowding, scoop out heaping tablespoons of the batter and carefully drop into the oil. The fritters will naturally flatten out. Cook for 3 to 5 minutes per side, until golden brown, flipping them over carefully, just as you would a pancake. Remove the fritters from the oil and drain on a large, oven-safe plate lined with paper towels. Keep fritters warm in the preheated oven as you continue to fry the remaining fritters in batches. Serve plain or with Tzatziki. 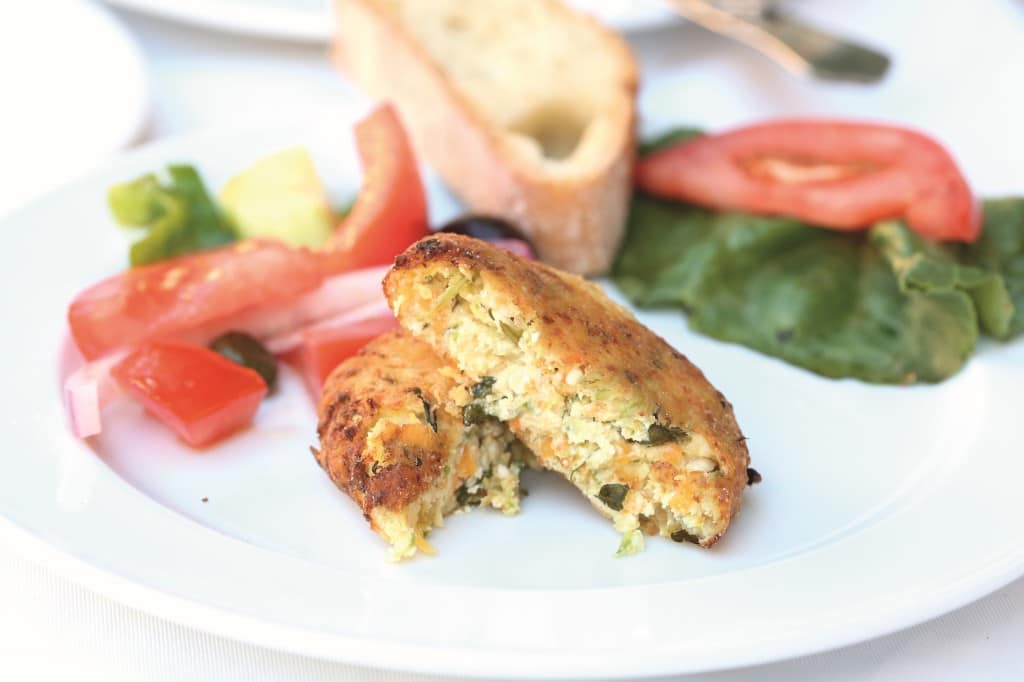