With just a handful of ingredients these sweet and spiced Apple Spice Cake Mix Waffles are a delicious breakfast when topped with butter and syrup or fresh apples and whipped cream. 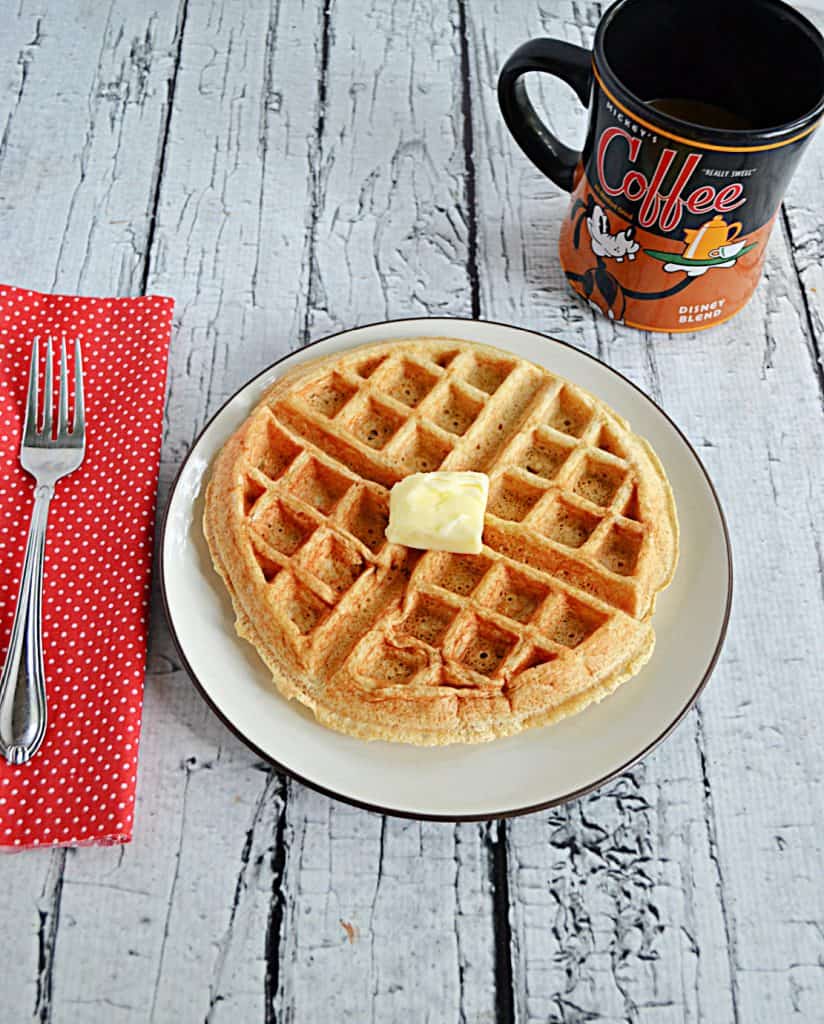 Did you know that National Waffle Day is in August?  It is!  When I found out I knew I had to make waffles since I finally have a waffle maker again.

As you know I'm not a huge breakfast fan and when I do eat breakfast it's usually a piece of toast or a small bowl of dry cereal.  However, I can totally get behind a stack of pancakes or a big waffle every now and then.

In college it was kind of a big deal when you made your own waffle at the waffle station.  I would rarely do it but anytime I did I made sure to top that baby with fresh fruit, tons of butter, and rivers of syrup.

Back then you simply had a regular waffle batter or sometimes a fruit waffle batter.  So now that I'm an adult I like to be able to make whatever kind of waffles I want and that's just what I did.

I had a box of cake mix in the cupboard that was about to expire but it was so hot outside and I did not want to turn on the oven to make a cake.  Instead, I decided to turn my cake mix into waffles!

That's right, I used a cake mix to make waffles.   I figure it has the same basic components of flour, baking powder, and sugar so why not?  While this makes a sweeter than usual waffle it isn't overly sweet.

To make the waffles I combined all the ingredients in a big bowl.   Whisk the batter until it is mostly smooth.

Remove from the waffle iron and repeat with remaining batter.

Top with butter and syrup or whipped cream and apple slices. 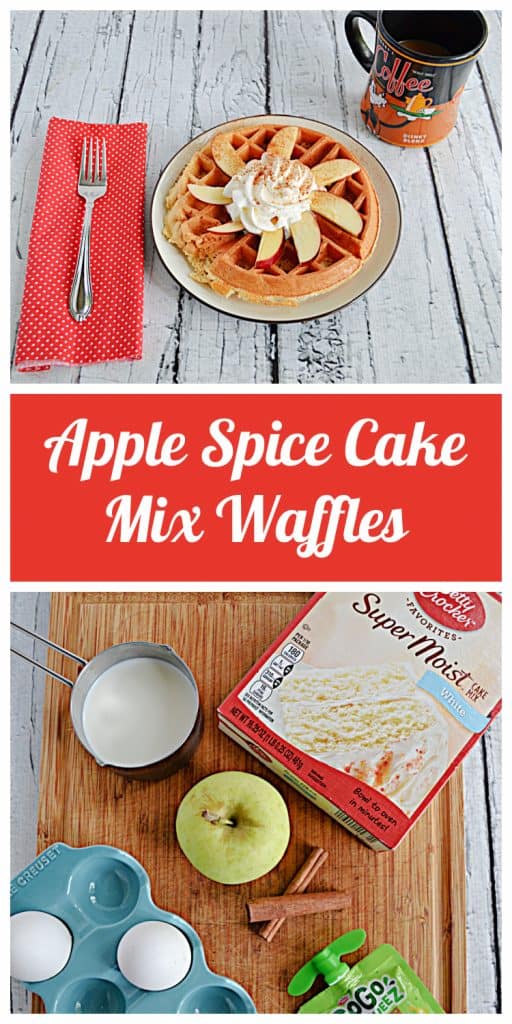 These waffles are really tasty.   The flavor of apple is not in your face, it's more of a subtle flavor which I like.   Then the cinnamon gives it just a hint of spice.   They would be a really wonderful fall breakfast.

The one thing I want to note is that these waffles did not get very crispy.  I do like my waffle to have a little crunch to it and these really didn't.  They are more on the chewy side which works because of the apple cinnamon flavor but I wanted to note that so you aren't looking for a big, crisp waffle.

Can I add real apples to the batter?

You can add finely chopped apples to the batter but because of the design of the waffle maker it makes it hard to close it which is why I chose to use applesauce.   If you want to use a fresh apple you can chop one up, add a little water, and put it in a food processor to puree and then add it to the batter.

Can I use canola oil instead of vegetable oil?

Sure!  You can substitute in canola oil, sunflower oil, or grape seed oil in place of the vegetable oil.  I usually use whichever one I have in the cupboard at the time.  Don't use olive oil though as it has a distinct flavor.

What flavor cake mix can I use?

I would recommend using a white cake mix or a yellow cake mix in this recipe.   However, if you want it to be heavy on the spice you can certainly use a spice cake mix.

Can I make this without a waffle maker?

No. Unfortunately you have to have a waffle maker to make waffles.   There's no way around it.  The good news is that you can buy a fairly cheap waffle maker like this Oster Belgium Waffle Maker for under $20. 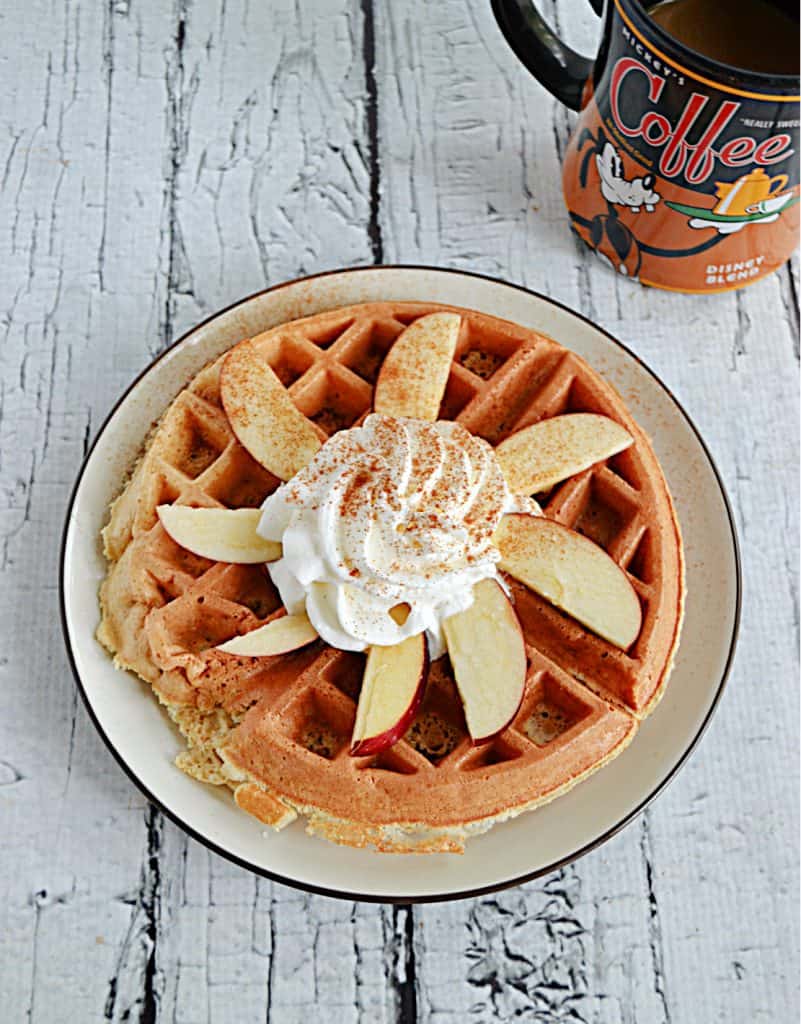 I ended up eating two waffles from this batch because I wanted to try some different toppings.  The first one I put butter and syrup on.  I think you could really taste the cinnamon with a bit of the apple when you top it like this.

For the second one I topped it with whipped cream, fresh apple slices, and cinnamon.  I think if you are looking for more apple flavor this is the one to go with. 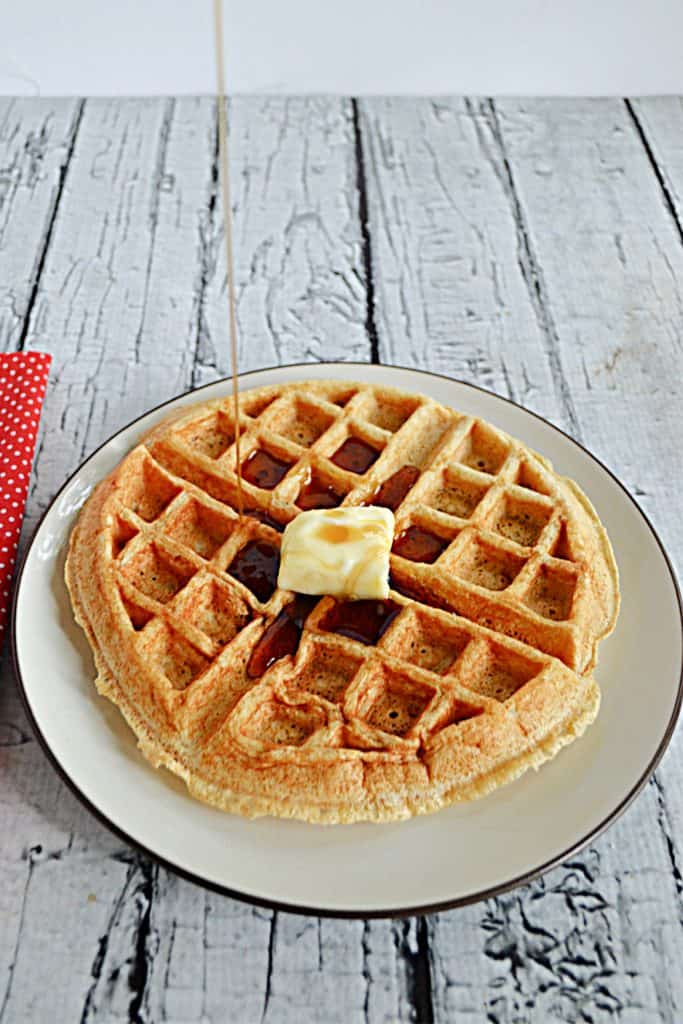 If you’ve tried my Apple Spice Cake Mix Waffles or any other recipe on Hezzi-D’s Books and Cooks please take a minute to rate the recipe and leave a comment letting me know how you liked it. I love hearing from you! You can FOLLOW ME on: