A fun vanilla layer cake frosted in white, yellow, and orange then topped off with white, orange, and yellow swirls dotted with candy corn and sprinkled with fun Halloween sprinkles for the ultimate Halloween treat! 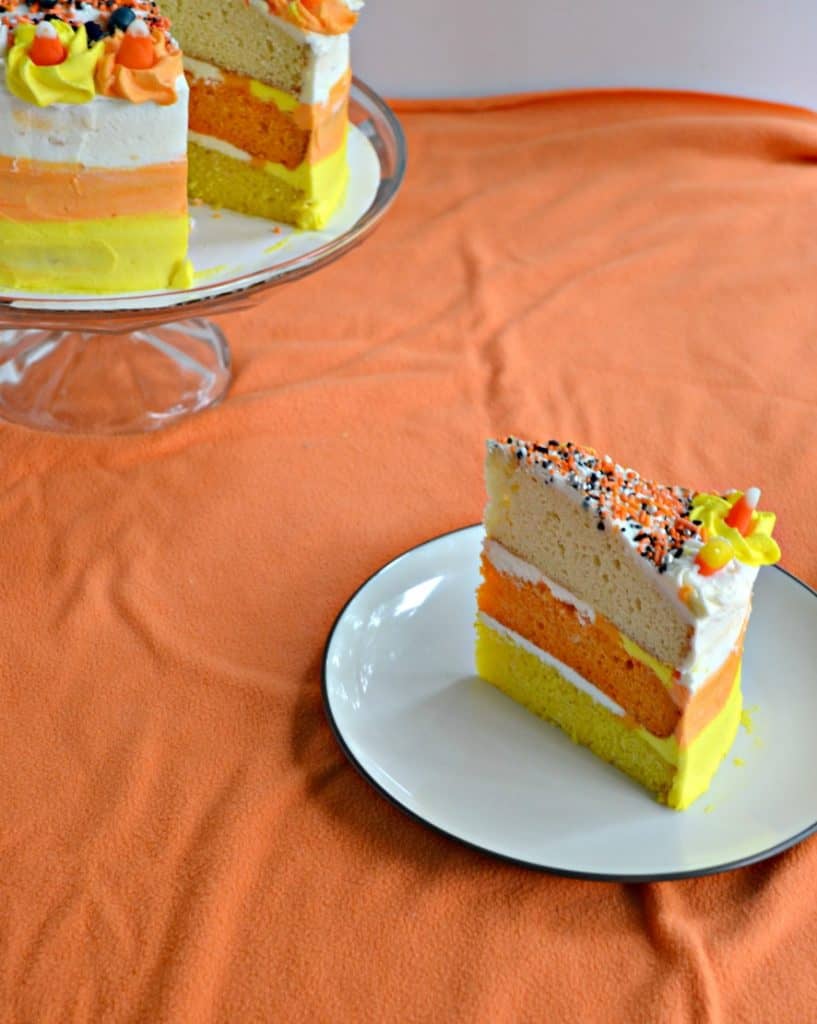 This post and recipe was created for #HalloweenTreatsWeek! I was sent samples by some of the sponsor companies but as always opinions are 100% mine

Halloween is one of my absolute favorite holidays.  I love dressing up at home and at school, seeing all the kids in costume, passing out candy, and making a ton of Halloween treats.

Last year was super fun because J was old enough to go up and down our street to get candy.  This year he will be extra excited to go to all the houses in the neighborhood and get as much candy as possible.

I've been wanting to make an awesome Halloween cake and after a lot of thought I decided on this incredible Candy Corn Layer Cake.  It turned out so much better than I had even hoped!

The cake was a little dense but it tasted delicious. It's also super fun since it's colored and stacked like candy corn.  The frosting was my basic buttercream frosting except for a few hints of Wilton Orange Creme Decorating Icing.

So let's talk about the actual cake.  I added a lot of my homemade vanilla extract because I really wanted to bring out the vanilla flavor.

Then I colored the cakes with white, orange, and yellow gel food coloring.  I simply put them in the oven, baked them, and let them cool.

What type of food coloring do you use?

Can I use a box cake mix?

You can use a box cake mix if you are just looking for a cake that looks like candy corn. You'll need two boxes of cake mix and you'll use most of them but not quite all of them.  Follow the directions on the back of the box to make sure they bake up correctly.  I do prefer to use my own cake but in this case a boxed mix would work.

How do you store the cake?

This cake can be stored in an air tight container for up to 4 days.  I do not store it in the refrigerator but you could.  I prefer to put my cakes in a cake carrier for storage because then it's also easy to transport them if needed.  If not, then I use a glass cake dome to store them. 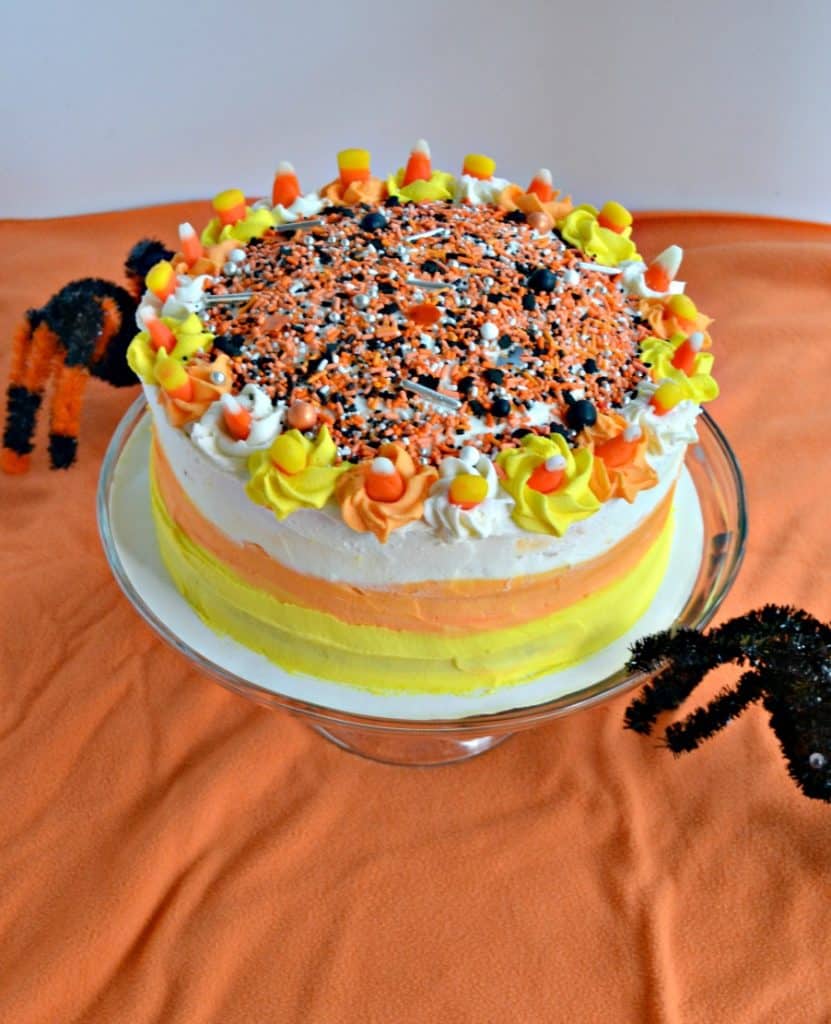 When stacking the layers I had a fun thought that if the frosting was also candy corn colored it would be awesome.  So what I did was pipe yellow frosting around the edge, then I used the Wilton Orange Creme decorating frosting which came with it's own tip to pipe a second layer of frosting inside the first.   This gave it additional color and it added some orange flavor to the cake.  Then I filled in the rest with the white frosting and stacked the cakes.

Next I worked on the sides of the cake.  I put the colored buttercream in disposable piping bags and added a tip.  I like using the disposable bags because when you are done you pitch them.  No mess, no fuss, no washing of bags. 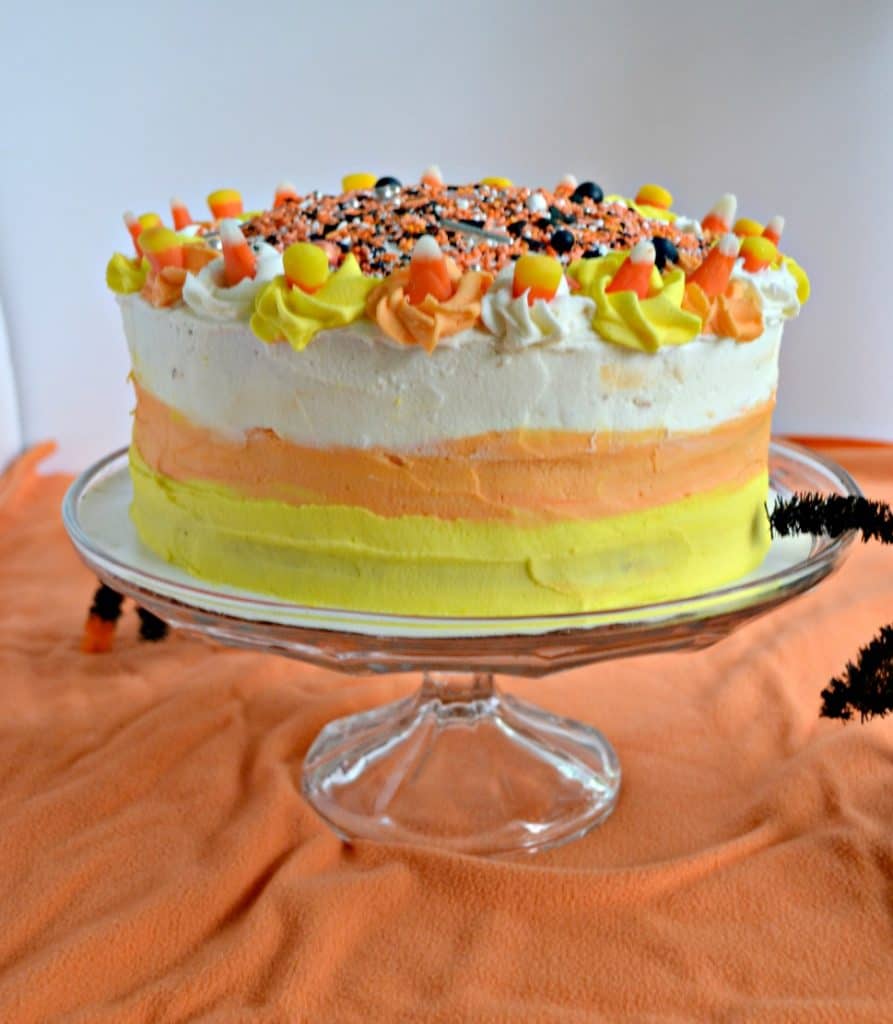 Then I simply put white frosting all over the top and instead of worrying about decorating the top I simply dumped a 2 ounce bag of fun Halloween sprinkles on top!  Then I alternated swirls of color as a border, stuck some candy corn in the swirls, and I had an awesome cake!

I was pretty proud of myself for how cool it looked.  Little did I know that when I cut into the cake it would look even better! 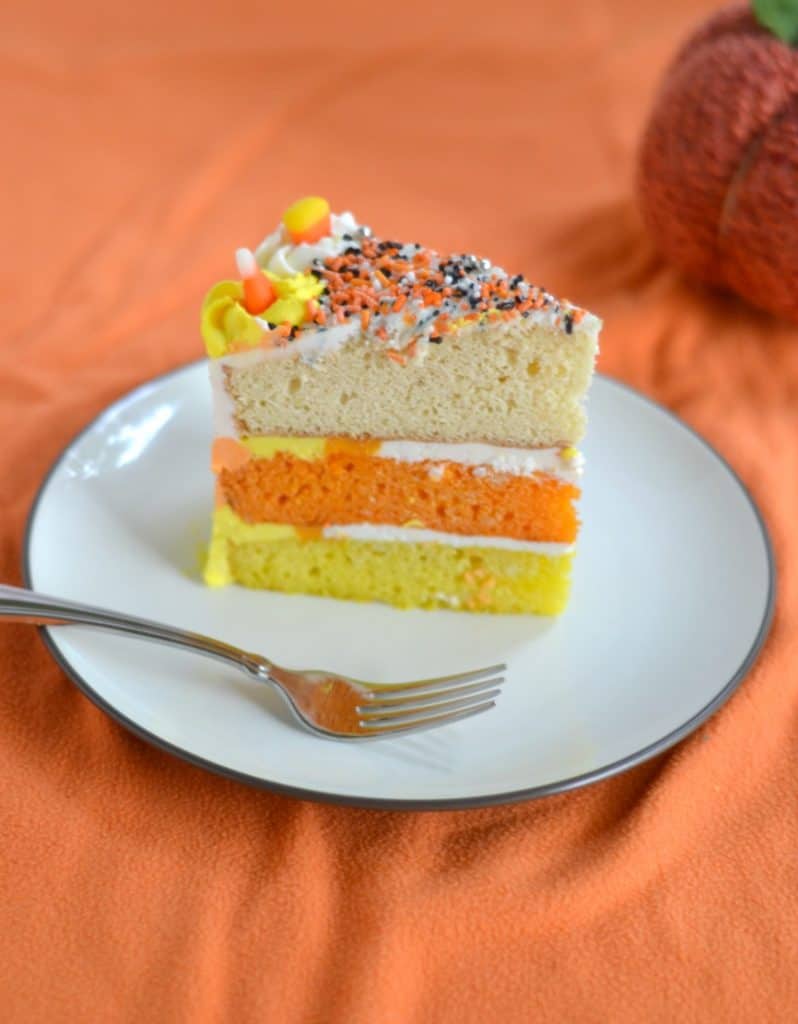 I was very excited about this cake but also a little concerned with the weight of it.  I actually took it to my basement to weigh it and found that in total it weighed 6 and a half pounds!   Thankfully we found a few friends to share the cake with and they raved about how good it was.

I'll be honest, I thought the buttercream was spot on and the cake itself had a nice vanilla flavor that paired well with the frosting.  The hint of orange creme was just an added bonus. 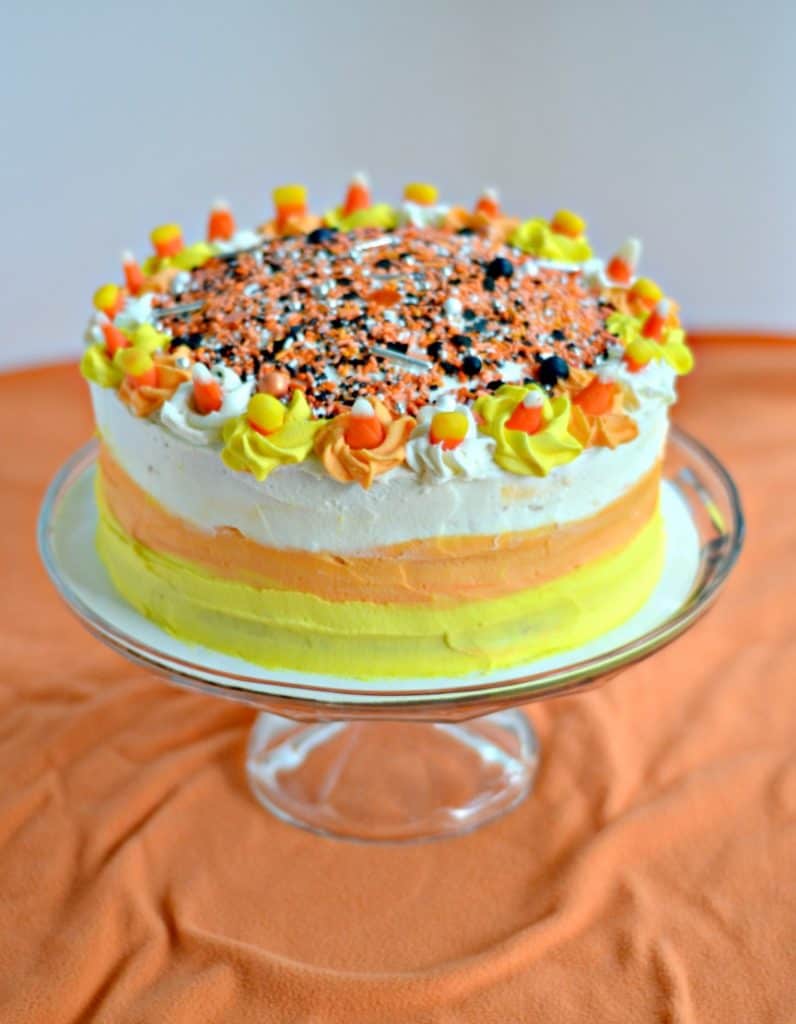 So if you are looking for a cake that isn't too hard to make but will totally wow your friends give this Candy Corn Layer Cake a try!  You'll be thanking me later!

If you’ve tried my Candy Corn Layer Cake or any other recipe on Hezzi-D’s Books and Cooks please take a minute to rate the recipe and leave a comment letting me know how you liked it. I love hearing from you! You can FOLLOW ME on: 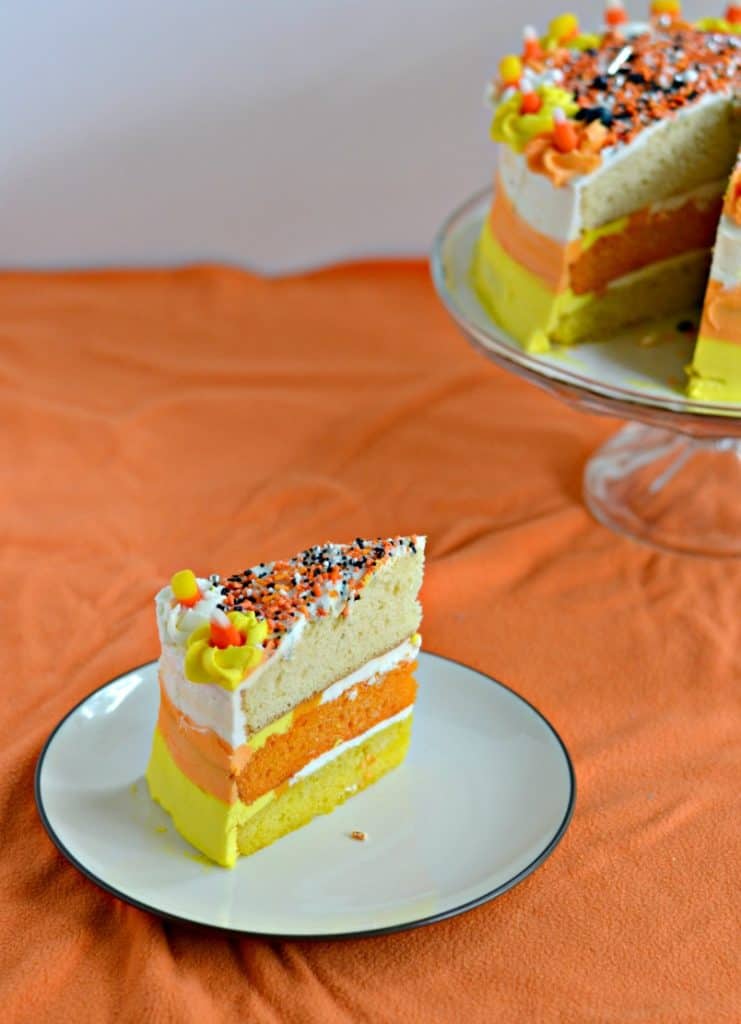