Give your Rice Krispies Treats a fall twist with flavors of apples, caramel, and cinnamon mixed right in the treats! 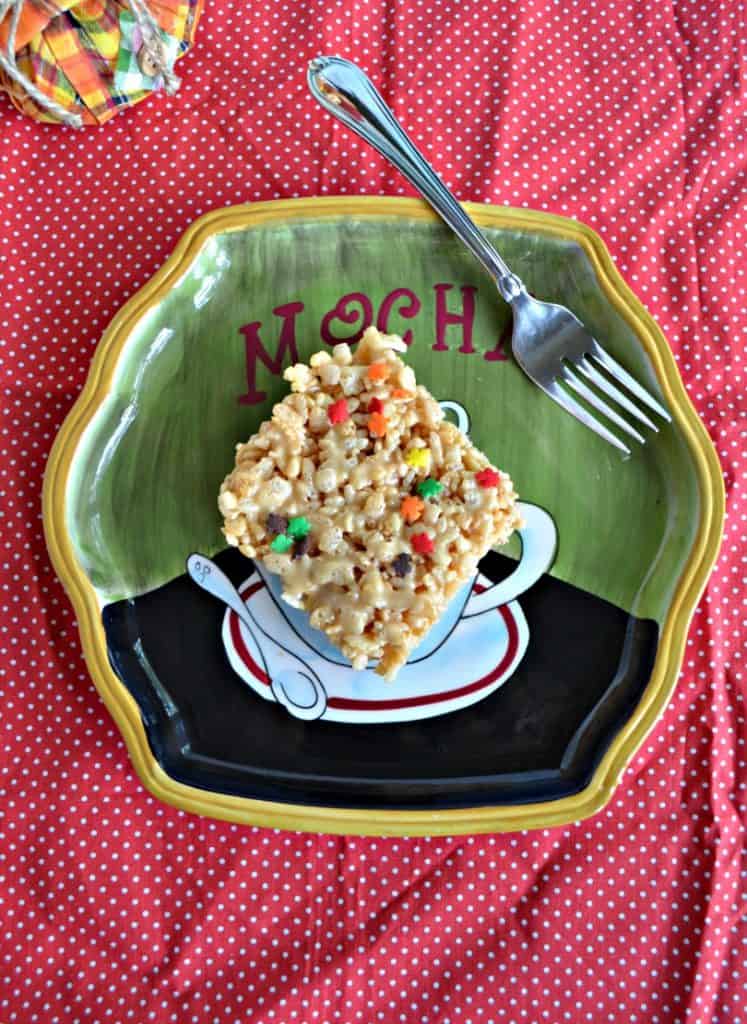 I don't know about you but whenever I want a super easy no bake dessert I go right to Rice Krispies Treats.  They only have a handful of ingredients, cook on the stove for less than five minutes, and they have been a favorite of mine since childhood.

Since it's fall and I've been making all things apple and pumpkin I knew I wanted to use one of those flavors.  After checking my cupboard I found that I had Torani Green Apple Syrup and Torani Caramel Sauce so I decided to put those flavors to work together to make these treats.

To make the Rice Krispies Treats:  Put the marshmallows and butter together in a saucepan and melted them until they were both combined.   Add in a tablespoon of green apple syrup and two tablespoons of caramel sauce and mixed until well combined.  Stir in the Rice Krispies and cinnamon and then spread them into the pan.

Before the treat set I quickly put another drizzle of caramel sauce on top of them and sprinkled them with leaf shaped sprinkles.  You can use any sprinkles you want or leave them off.   Either way it's a fun addition. 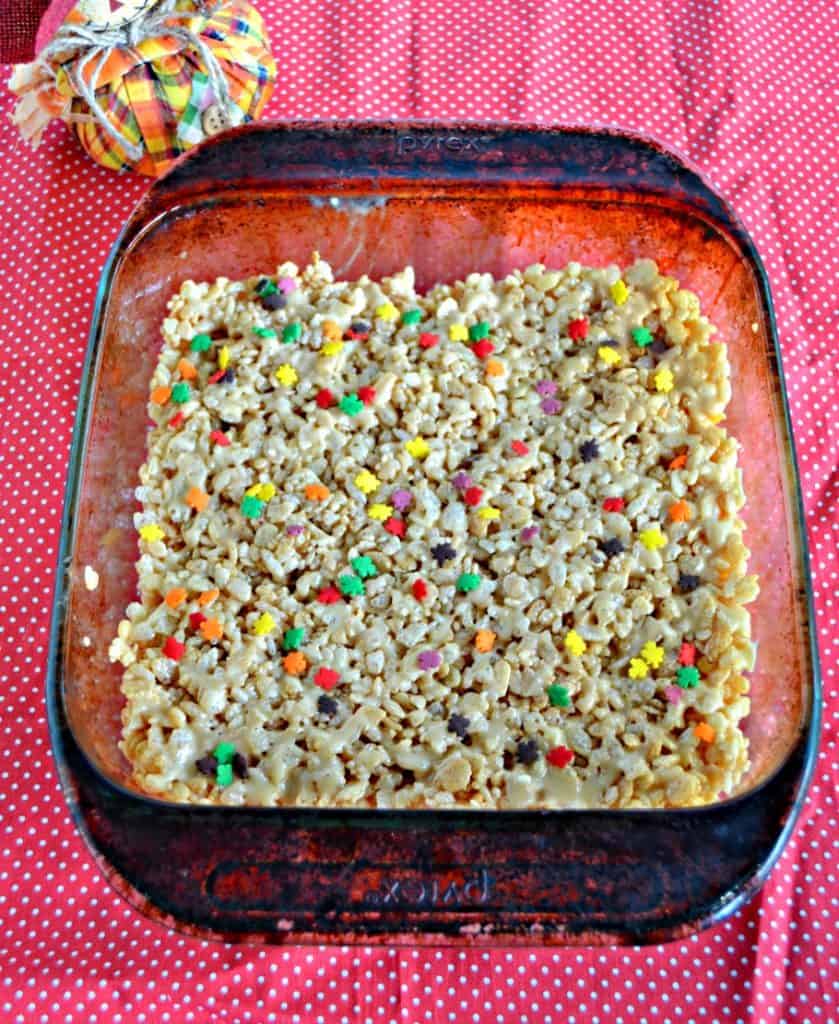 I can't find Torani Apple syrup.  What else can I use?

If you don't have apple syrup you can take ¼ cup of apple cider and boil it until it has reduced by half.  Use one tablespoon of this syrup in place of the apple syrup in the recipe.

How do I store the Rice Krispies treats?

You can store them in the pan you made them in and simply cover them with plastic wrap or foil.  You can also put them in an air tight container and store on the counter.

You can keep them for 3-5 days.  If you want to keep them longer you can freeze them in an air tight container and then take them out to thaw and enjoy.

How do you freeze Rice Krispies Treats?

Wait until they have cooled and hardened.  Cut them into squares. Wrap them in wax paper or plastic wrap them put them in a freezer bag.  Store in the freezer for up to 8 weeks.

Once the treats hardened I gave one a taste and I have to say it tasted like fall. The apple gave the treats a sweet and tart flavor while the cinnamon added spice and the caramel added creamy sweetness.   It was a fun play on the original recipe and it's perfect for fall!

If you’ve tried my Caramel Apple Rice Krispies Treats or any other recipe on Hezzi-D’s Books and Cooks please take a minute to rate the recipe and leave a comment letting me know how you liked it. I love hearing from you! You can FOLLOW ME on: 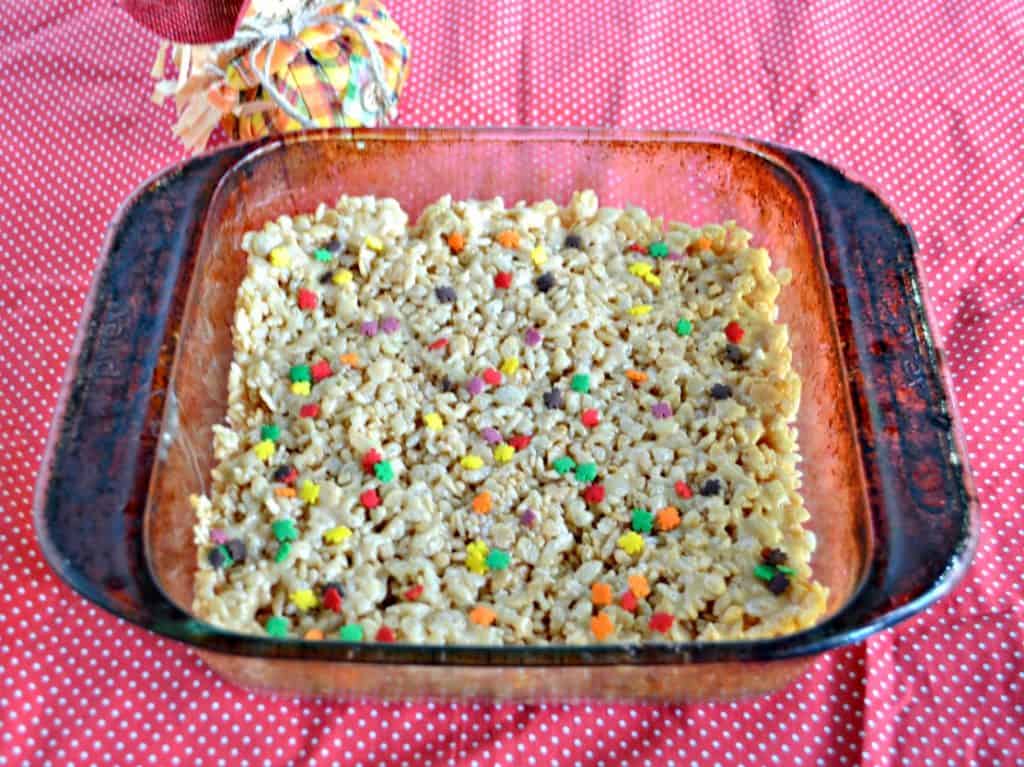 Welcome to the fourth annual #FallFlavors! We have 21 bloggers sharing over SIXTY recipes using fall ingredients like squash, apples, maple, pecans, and many more. Follow #FallFlavors to see all the delicious recipes on social media.