Chicken Gyoza are Japanese dumplings filled with ground chicken, spices, and cabbage then either steamed or pan fried and serving with a tangy dipping sauce. 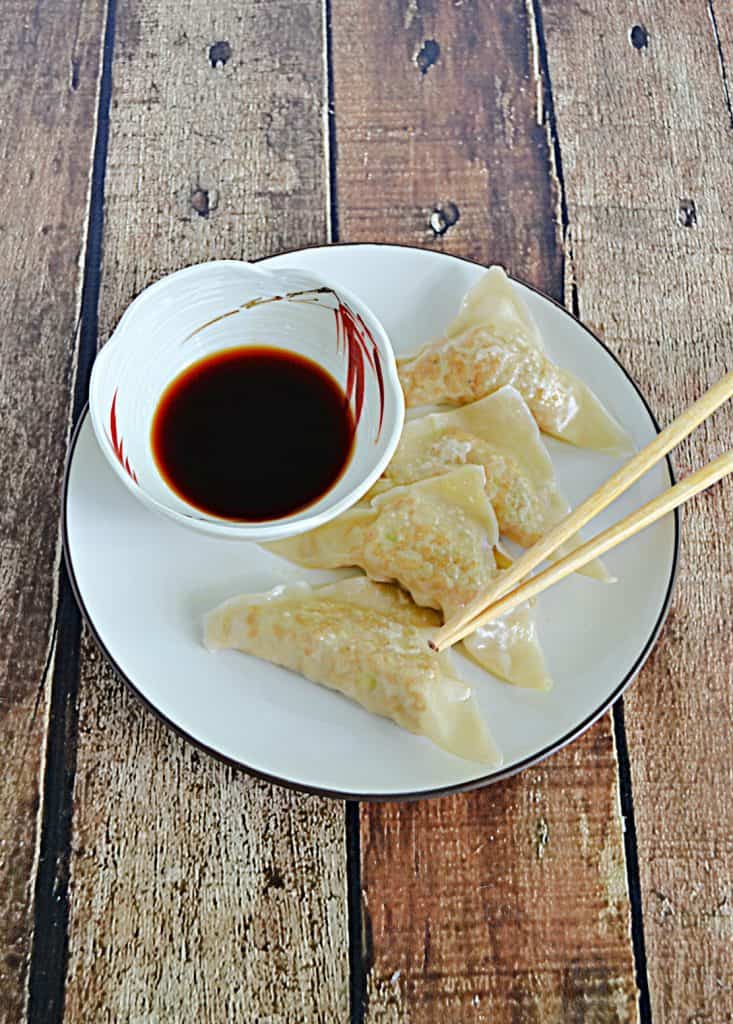 Welcome to #SummerGamesWeek 2021 hosted by Amy from House of Nash Eats!  We are celebrating the start of the Tokyo Games with over 50 recipes representing more than 25 countries competing in the upcoming Summer Games! Come join me and my fellow Summer Games Week bloggers as we bring you recipes from appetizers to drinks to entrées and desserts!

As we all know the summer Olympics start this week.  I'm excited since they were supposed to be last year but got postponed a year.   It's fun to watch them whenever they are on.

Since the Olympics are being held in Japan this year I wanted to make some cuisine to honor that country.  I thought it would be fun to watch the games while eating the Japanese food.

I haven't had a whole lot of exposure to Japanese food as I wouldn't eat it as a child and now that I'm older we don't have any Japanese restaurants nearby.  My uncle used to go to Japan several times a year for his job and would talk to us about the foods he would eat.

When looking through tons of recipes I came across Chicken Gyoza which are basically chicken potstickers.   While you can make the dough on your own it's much easier to simply grab wonton wrappers and use those instead.

I liked that this was a fairly easy recipe and didn't have a ton of ingredients.   You can also make them ahead of time and freeze them which is nice as well.  This recipe makes a lot so I ended up cooking some and freezing the rest for later.

To make the dumplings cook the ground chicken in a skillet until it is no longer pink.  Add in the garlic, ginger, salt, pepper, paprika, green onions, cabbage, and soy sauce and cook for 2-3 minutes.

Remove from heat and cool completely.

To make the dumplings place a teaspoon of filling in the middle of a wonton wrapper, rub the edges with water, and seal.

Heat olive oil in a pan and fry the dumplings for 1-2 minutes.  Flip and fry for an addition minute.  Add water and cover the skillet with a lid to steam the dumplings.

Serve with dipping sauce and enjoy! 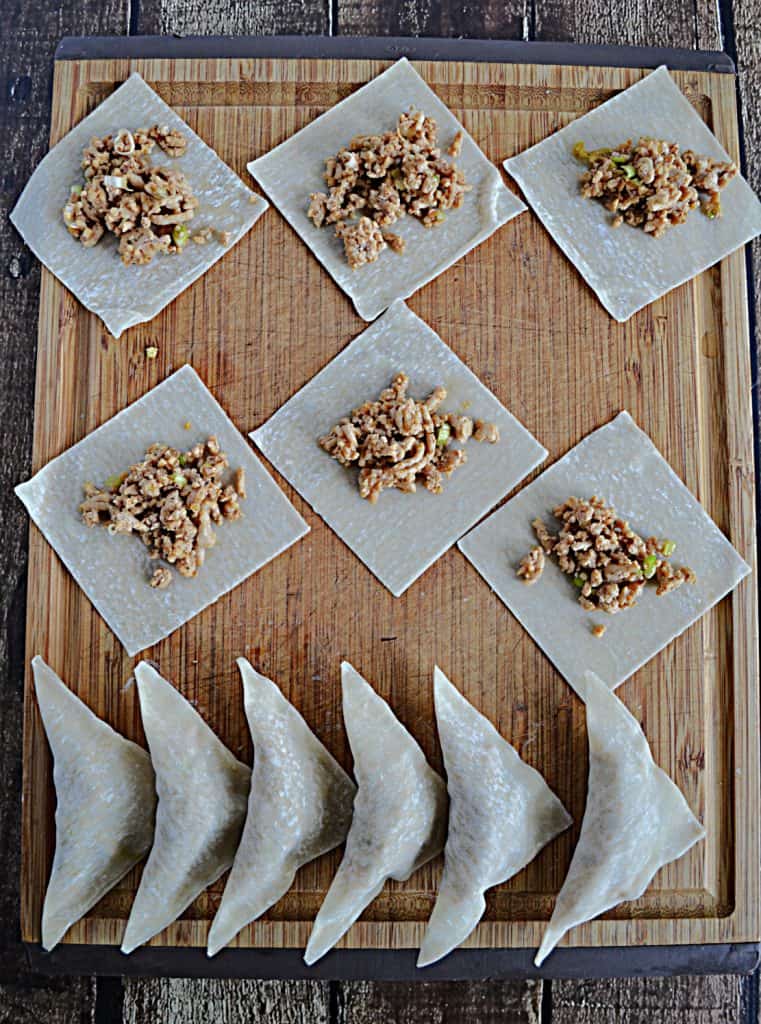 I like how simple these are to make.  They don't have a ton of extra ingredients in the filling so you are mainly tasting the actual chicken.

There were many different versions of the sauce that I found while searching.  I went with one that I use often for dipping tofu, dumplings, or wontons which is a simple sauce made from soy sauce and rice wine vinegar.  It's salty and tangy and so perfect for these.

Can I just steam these?

Yes, you don't have to fry them first but I like that it firms up the dumpling before steaming.  If I was putting these into a soup I would just steam.

How do I store the Gyoza?

If you have already cooked them you can store them in an air tight container in the refrigerator for up to 3 days.  If you haven't cooked them they are best kept in the freezer until you are ready to cook them.

Can I freeze them for later?

Yes!  Once you have made the gyoza lay them on a cookie sheet and freeze for 30 minutes.   Place them in a zip top freezer bag and store in the freezer for up to 6 months.  When ready to make them pull them directly out of the freezer and just steam them for a few extra minutes.

Can I put these in soup?

Yes!  Instead of steaming them ahead of time I would wait until the soup is ready and simply boil them in the soup for 1-2 minutes to cook them then serve. 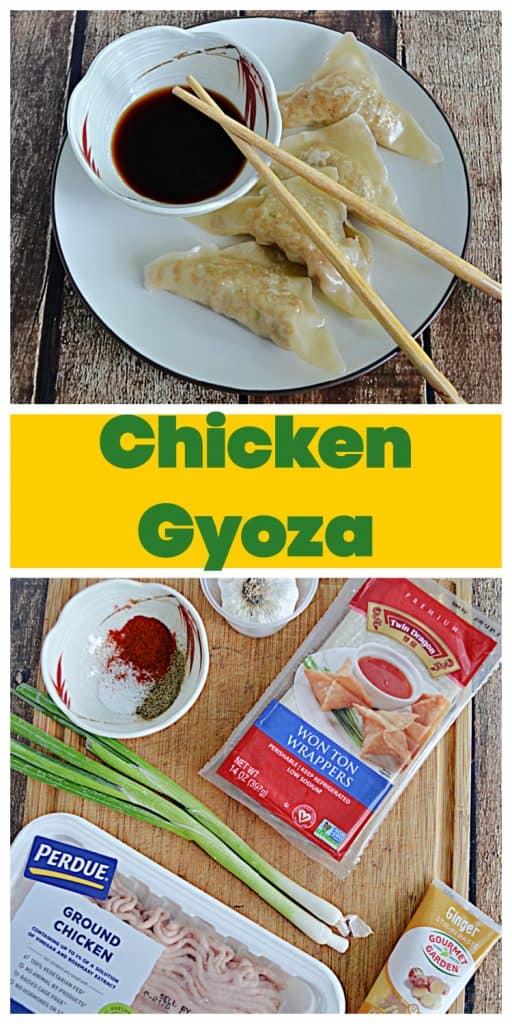 We ended up enjoying these for dinner along with a few egg rolls.  I actually had a tofu stir fry planned as well but after I saw how many dumplings this recipe made I decided that we could just eat them for dinner.

The dumplings were soft and the filling was perfectly spiced.  The dipping sauce really made this dish so don't skip it!   It adds the perfect amount of tang and saltiness that the dumplings need.

If you’ve tried my Chicken Gyoza or any other recipe on Hezzi-D’s Books and Cooks please take a minute to rate the recipe and leave a comment letting me know how you liked it. I love hearing from you! You can FOLLOW ME on: 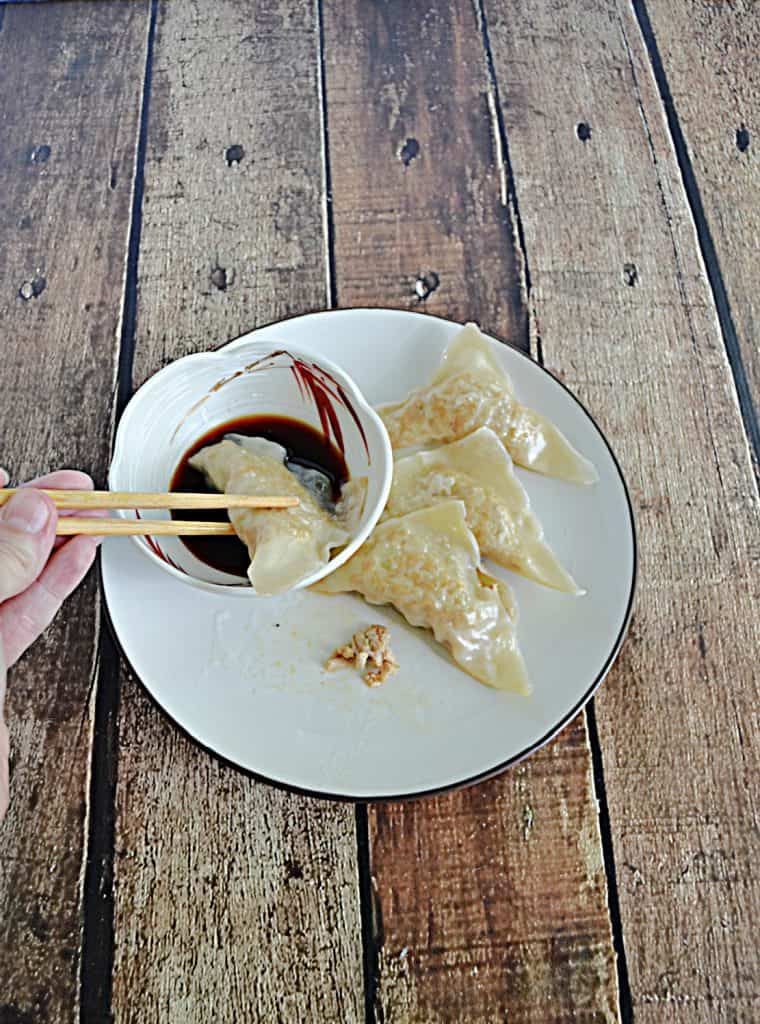