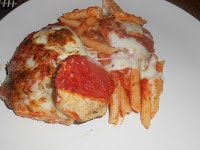 Another month has passed and it's time once more for the Secret Recipe Club.  It's been one year since I first joined and while there have been some bumps in the road I've mostly enjoyed searching new blogs and finding recipes to make.  This month the blog I was assigned to was Fallon's Cucina.  Fallon had a lot of yummy things to choose from and initially I was going caramel corn with white chocolate drizzle or S'mores cake.  However I've been really hitting the sweets hard this past month so I thought it better if I made a main entree instead. 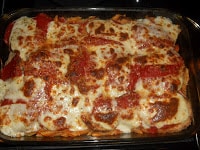 The dish that immediately caught my attention was the Chicken Sorrentino Penne.  Whenever I go out to an Italian restaurant my decision is always between chicken parmesan and eggplant parmesan.  With this recipe it's like putting the two of them together!  I was a little concerned because Fallon sai it took her almost 5 hours to make this dish.  Luckily for me, I had it made and in the oven in under 45 minutes.

I started with breading and baking the eggplant.  While the eggplant was baking I prepared the pasta and cooked the chicken.  This dish has the pasta on the bottom, then it's layered with the chicken, the eggplant, sauce, and cheese.  It's a great combination of flavors and it allows me to have two of my favorite pasta dishes wrapped up in one! 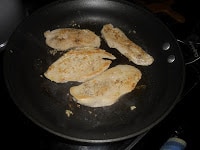 2.  Sprinkle the halved chicken breasts with salt, pepper, a drizzle of olive oil, and the minced garlic cloves.  Allow to rest while you prepare the eggplant. 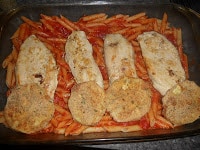 3.  Peel the eggplant and slice across into ¼ inch slices.  Place the flour in a shallow dish, the 2 eggs in a second dish, and the breadcrumbs in a third dish. Dip each piece of eggplant into the flour, shaking to remove excess.  then dip it into the beaten egg and press it into the breadcrumbs coating it on both sides.  Put the eggplant on the prepared baking sheets.  Bake for 20 minutes or until lightly golden brown.

4.  Meanwhile, cook the penne according to the package directions.  Drain and set aside. 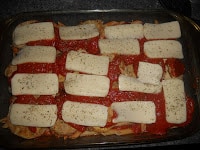 5.  Heat 1 teaspoon of olive oil in a skillet over medium high heat.  Add the chicken breasts and cook for 4-5 minutes on each side.  Remove from pan.

6.  In the bottom of a 9 x 13 baking dish combine the penne with 2 cups of marinara sauce.  Sprinkle with the Parmesan cheese.  Place the cooked chicken breasts on top of the pasta.  Top the chicken with the baked eggplant.  Sprinkle with oregano and Italian seasonings.  Pour the remaining sauce over top.  Place sliced mozzarella on top of the eggplant. 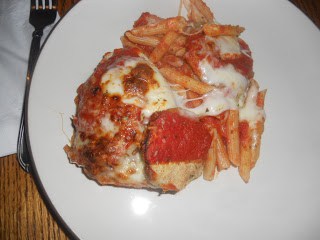