When I go back to school I don't have a lot of time for lunch.  I make a lot of sandwiches because they are quick to make and quick to eat.   Usually I make a turkey and cheese sandwich but on occasion I switch it up.   This week the Sunday Supper Movement is sharing simple sandwich recipes and I can't wait to check them out so I can make some new ones! 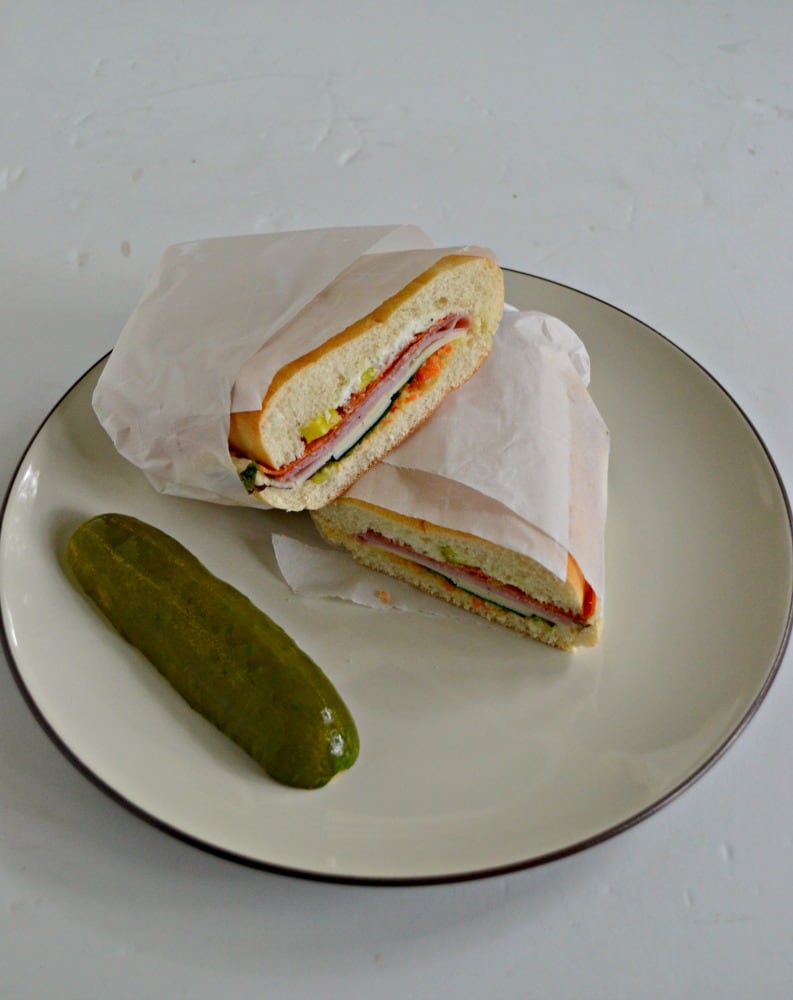 The sandwich I'm sharing is actually one I make for dinner because it's hearty and filling.   It's also great to make the day before you want to eat it or in the morning before leaving for work so that it soaks up all the flavors for a few hours before enjoying.  It may sound like this would be a lot of work but it's actually a really easy sandwich to make.

I'm sharing the recipe for a Muffuletta.  Traditionally Muffuletta sandwiches are made on a large round loaf of bread along with olive salad, cheeses, and Italian meats.   It's a lot of filling stuffed onto a bun so it's great for whenever you are really hungry.  Of course my version is a little bit different then your classic sandwich.

The first main difference is that this one has a smoked mozzarella spread on the top side of the bread.  This spread is amazing and would be great with crackers as well.  It's just fresh mozzarella, olive oil, salt, and pepper mixed into a spread.   I also used individual hoagie rolls instead of one large load.  I spread the mozzarella spread on top of the buns and then moved on to the filling.

The filling is fairly traditional.   I used ham, pepperoni, and salami as the meats.   Now I'm not one to eat ham so I {gasp!} put turkey on mine instead but I left the ham on my husbands.  Then I finished it off with picante Provolone cheese. 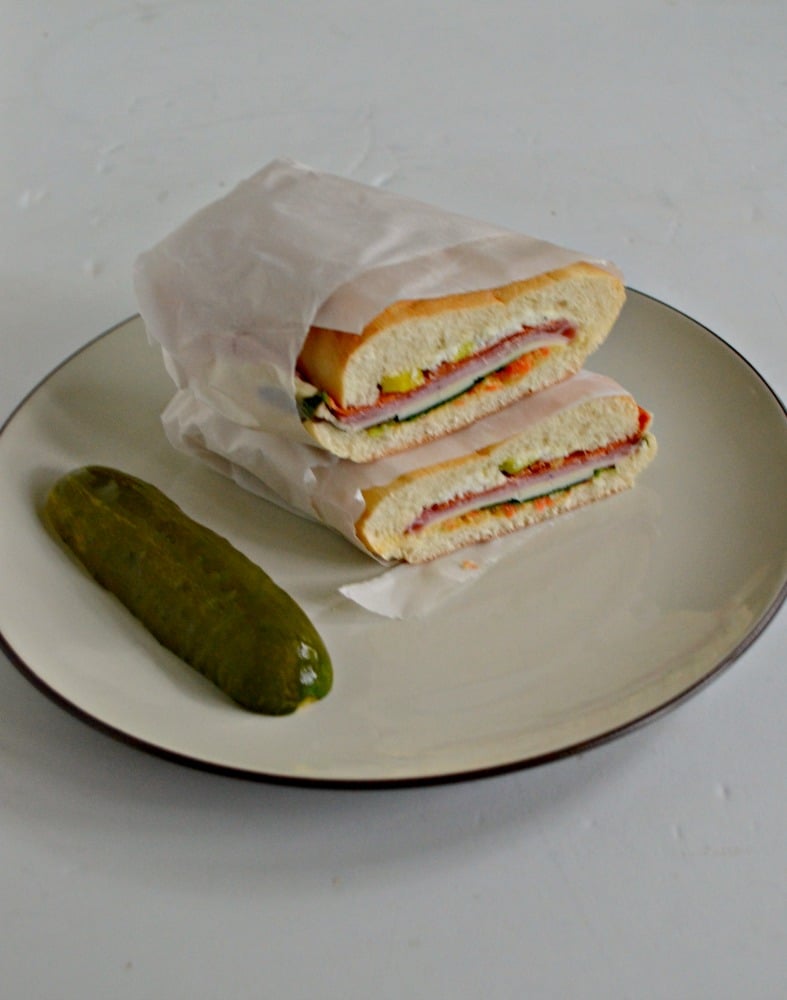 As for the vegetables, I put a bunch of mixed greens on mine.   You can use romaine, iceberg, or any other kind of lettuce you have.  I had the mixed greens from the farmer's market so that's what I used.   I also put on some pepperocini's to give the sandwich a bit of a bite.   Instead of simply chopping up olives I combined olives and giardiniera, chopped them up, and spread them on the lower portion of the bun.  How awesome does this sound?

At this point you can drizzle olive oil or Italian dressing over top of the meats and cheese, press the bun halves together, wrap up the sandwich, and refrigerate until ready to serve.  It's that easy!  I think the hardest part of this sandwich is getting all of the ingredients from the deli.  It took a long time to order everything I needed. 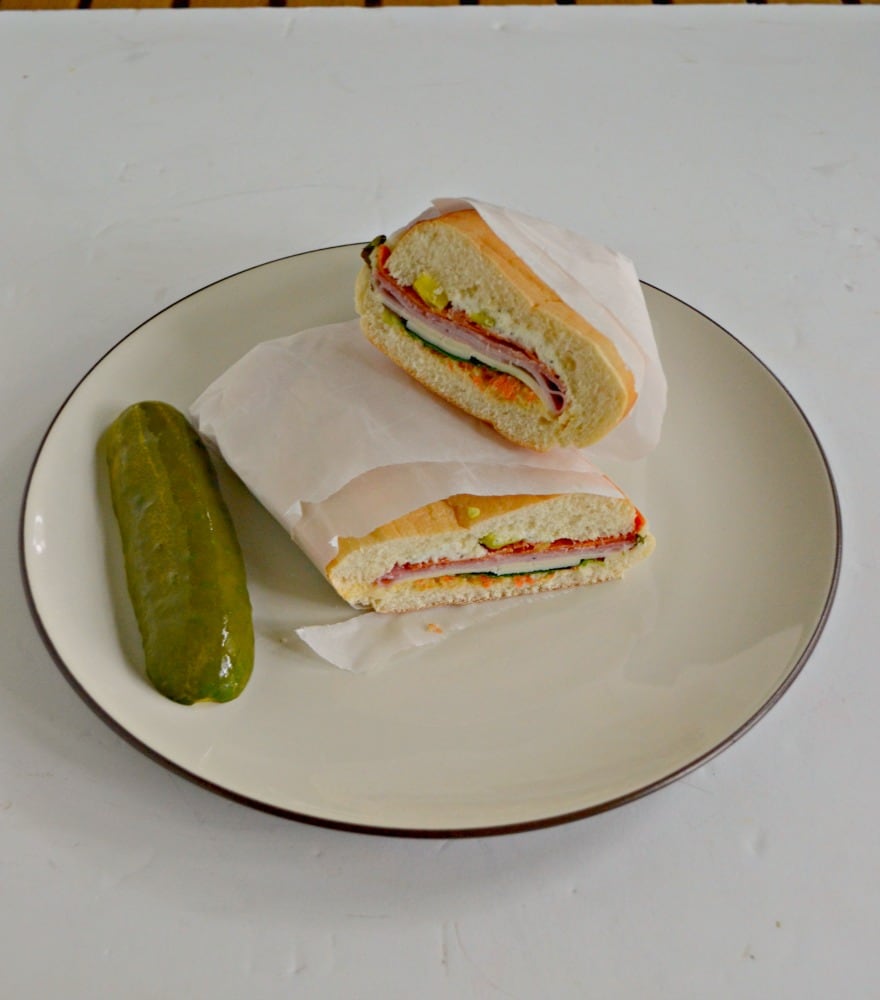 When it was time to each I simply removed the sandwiches from the refrigerator and cut them in half.   I enjoyed mine with a side of Italian dressing which was the perfect dipping sauce for this Muffuletta.   I really liked it.  I thought the mozzarella spread gave it a lot of flavor, there was a ton of flavors going on from the meats, the provolone was sharp, and the vegetables added color, crunch, and flavor.  It's a great sandwich and is definitely filling.  These would be great to take on a hike or a picnic. 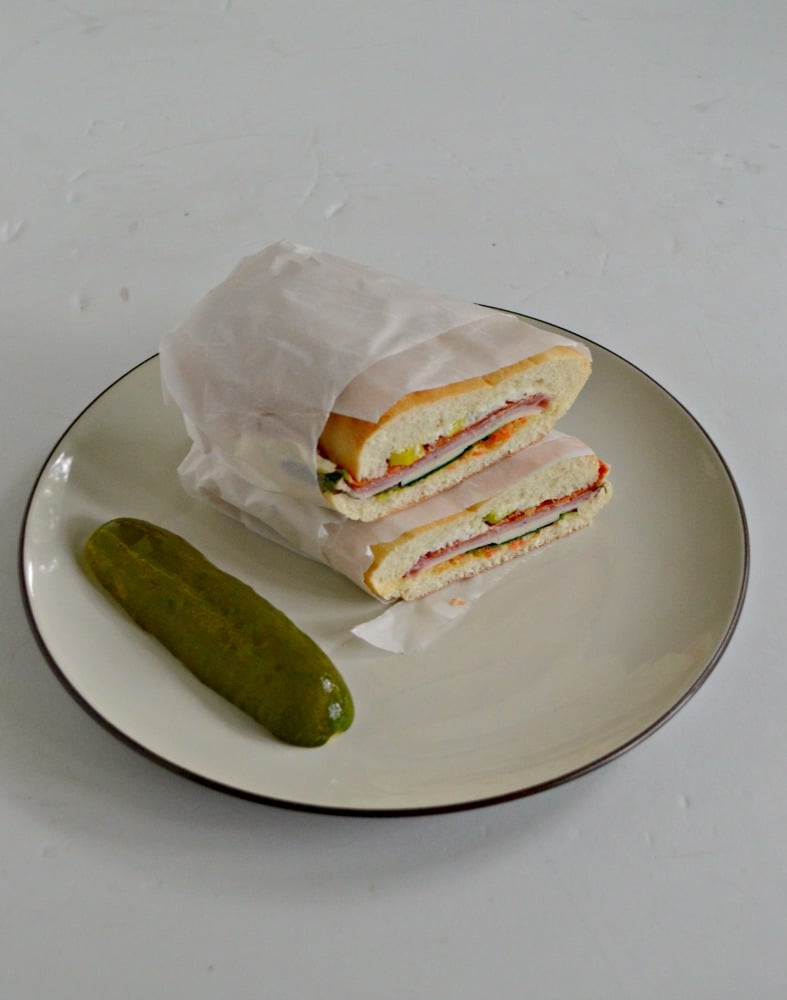