This month the What's Baking challenge was hosted by Eva of Eva Bakes.  Since it is October she challenged us to bake with either pumpkin or sweet potatoes.  Since pumpkin season is in full swing I couldn't wait to get started on my dish. 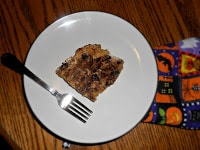 I've been wanting to make this pumpkin crunch cake for several months but there was never an occasion to do it.  While there still wasn't an occasion to bake it, I now at least had an excuse to bake it.  I was surprised by how easy it sounded to make.  After putting it together I was highly skeptical of it turning out.  All of the liquid was on the bottom and the top was as dry as a dessert.  Still, I baked it according to the directions and it smelled like pumpkin pie. 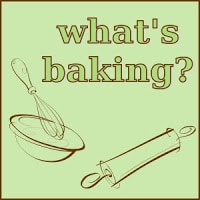 I took it out of the oven and tried to let it cool.  I really did.  But after 10 minutes of it cooling neither Frank nor I could take it anymore and we quickly cut ourselves a piece.  It was fall and pumpkin heaven!  The bottom part of the cake is more like a pumpkin pie custard and the top is a pumpkin cake crunch.  It was amazing.

I had to take it in to work the next day for fear of the two of us eating the entire 9 x 13 pan.  I cut the remaining cake into 16 pieces and it was gone before 10 o'clock.  I knew I had a winning dish with several co-workers asked for the recipe.  This is a great dessert to take to a party because it's simple to make but a total show stopper.

2.  In a large bowl combine the pumpkin puree, milk, eggs, sugar, cinnamon, and salt.  Pour the mixture into the prepared pan.

3.  In a medium bowl combine the white cake mix and pumpkin pie spice.  Sprinkle it over top of the pumpkin mixture, covering completely.  I used about ¾ of the cake mixture.

4.  Sprinkle the pecans on top of the cake and then pour the melted butter over top. 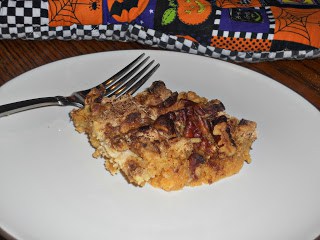