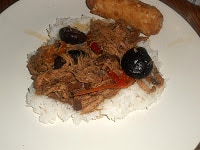 When I first saw a picture of this recipe my first thought was that it looked really pretty.  The shredded pork with the colored peppers over rice made for a good looking dish.  Once I read the recipe I was sold on it.  The only ingredient out of the ordinary for me was Chinese five spice, but I just happen to have some in the cupboard.

My husband called me at work while it was cooking and asked if there was cinnamon in the crock-pot.  I told him yes, it was in the Chinese five spice, but there was only a teaspoon of it in our pork.  I wasn't quite sure how it was going to taste, but it smelled delicious with sweet and spicy scents.  The taste was very different from what I was expected but I really liked it.  It was slightly spicy, just a hint sweet, and I could really taste the Chinese five spice.  Frank liked it but commented he would have liked it better without the cinnamon-I did not agree.  The only thing that made it even better was when it was topped off with just a bit of Sriracha.  Delicious!

1.  In a small prep bowl, mix five-spice powder, black pepper, Cayenne pepper, and salt.  Rub on all sides of pork loin.  Wrap tightly with plastic wrap and place in the refrigerator overnight.

3. Put the pork loin in crock-pot and place the dried mushrooms around the side.  Cook on low for 8-9 hours.

4.  When there is 1 hour left in cooking time, place scallions on the sides of the pork and the peppers on top of the pork. Season with salt and pepper.  Continue cooking for 1 hour more.

5.  Shred the pork using two forks and toss to coat in the sauce that has formed in slow cooker.  To serve, place rice in bottom of a bowl, place pork on top and ladle sauce over top.  Serve with Sriracha. 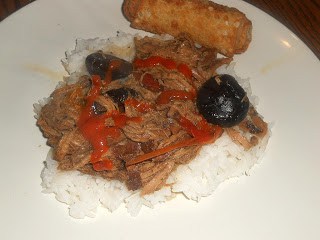