Triple Berry Slab Pie is made from a buttery, flaky homemade crust topped with a strawberry, blueberry, and raspberry filling then is finished off with strips of pie crust sprinkled with coarse sugar. 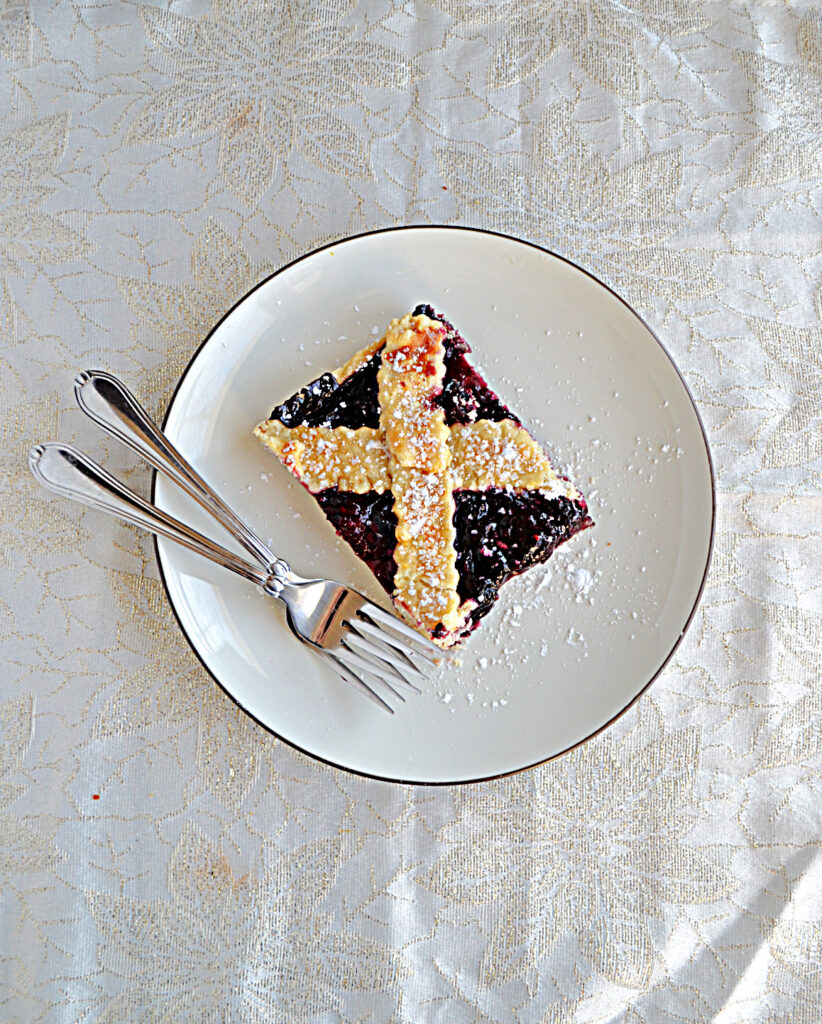 I like making pies.   I find that they aren't too hard to make and people love them, especially at the holidays.

One thing I've never made is a slab pie.  I've just never been interested in doing it because it looks like there isn't that much filling in the pie.  However, I decided it was high time I try one.

I decided to make a triple berry slab pie with strawberries, blueberries, and raspberries but you can really use any combination of berries you'd like.  I also decided to make my own crust since the refrigerator ones wouldn't fit the size of my pan.

To Make the Pie Crust:  In a large bowl combine the butter and shortening with the flour and salt.  Add the almond extract paste and ice water until a dough forms. Knead for 2 minutes then separate into two disks.  Wrap and refrigerate.

To Make the Filling:  Combine the berries, sugar, cornstarch, and juice from an orange in a medium saucepan over medium heat.  Simmer for 4-5 minutes, stirring occasionally, then remove from heat and cool completely.

To Make the Pie:   Roll out one pie crust and press it into a 10 x 15 inch jelly roll pan.  Spoon the filling on top of the crust.  Roll out the other crust, cut into strips, and lay diagonal on top of the pie.  Bake at 375 degrees for 35-40 minutes. 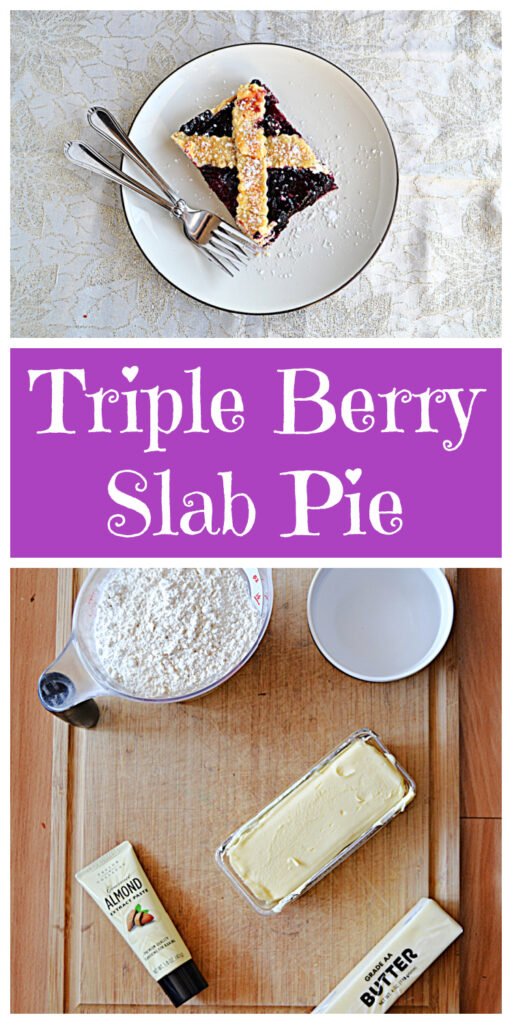 To make a slab pie you don't need a pie pan, you use a cookie sheet with sides on it, also called a jellyroll pan.  I used a good sturdy one from Anolon.   It's the perfect size and the rubber grips on the size of the pan made it easy for me to pull it out of the oven without disturbing the filling in the pie.

Making the filling I used a bunch of frozen berries, Dixie Crystals sugar, a bit of orange juice, and some corn starch to thicken it up.   Once it's been cooked you need to let it cool before pouring on to the pie crust or else it will melt the crust and make a big mess.

What is a slab pie?

A slab pie is a pie the fits inside a jelly roll pan or a shallow rectangular baking pan.  It is cut into squares and can feed more people than a traditional pie.  Slab pies are also easy to transport.  They are good at room temperature or served warm.  They can be single crust or double crust and can be served plain or with whipped cream or ice cream.

Can I use different berries?

Yes!  You can use any combination of strawberries, blueberries, raspberries, blackberries, or even cherries.  Just make sure you have the right amount of fruit to prepare the filling.  I wouldn't use any other fruit besides these five but if you want to experiment you can. 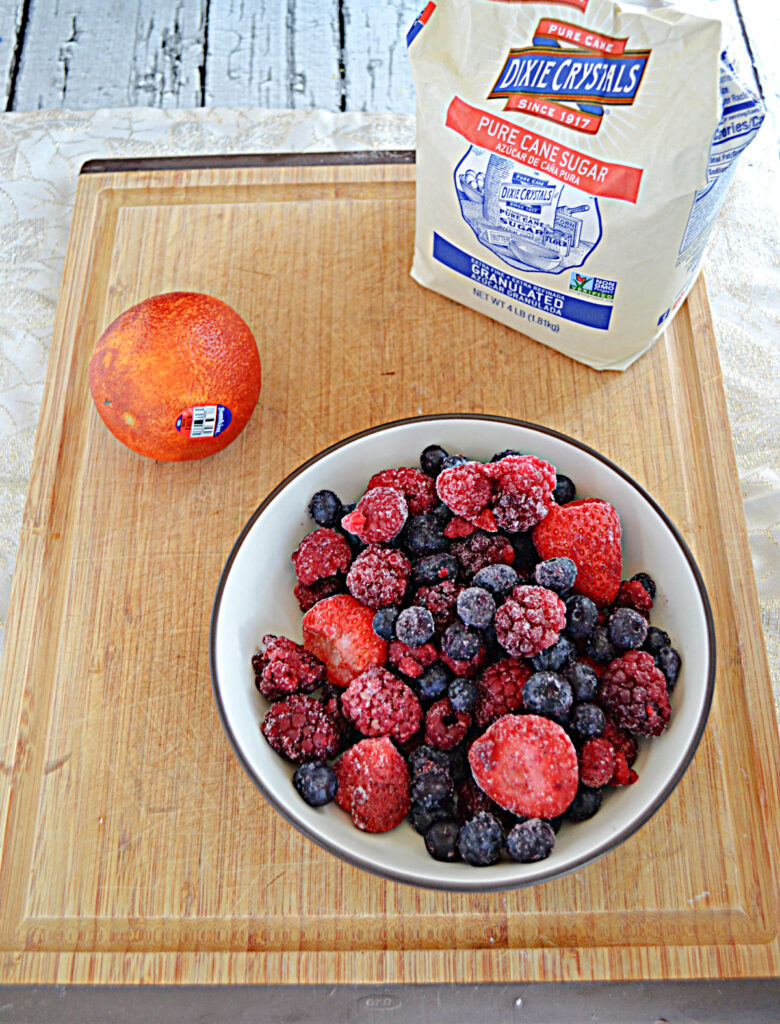 Why do I have to chill the pie crust?

This recipe calls for the pie crust dough to be chilled for 3 hours.  However, if you are in a hurry you can chill it for just one hour and it will still be fine.  Three hours will just be better because chilling the dough hardens the fat which helps the crust maintain it's structure while it bakes.  It also allows the gluten in the flour to relax which will result in a more tender pie crust and less shrinkage of the dough.

Do I have to make the pie crust from scratch?

You really do in this recipe.  In order for the crust to fit in a rectangular pan you need to make it and roll it out on your own.  If you have your own pie crust recipe you would prefer to use go ahead and do it!   Just know you'll need more than you traditionally would for a double crust pie because of the size of this pan.

I hate making pie crust from scratch.  I do it whenever I'm selling my pies and I do it if I'm making the pie for a special occasion but otherwise I will buy a refrigerated pie crust and use that because I find they work just as well.

My main issue with pie crust is that it's often pretty delicate, falls apart, and then I end up rolling it out multiple times and it gets warm and sticks to everything.  It's just a mess.

While this pie crust gave me a little bit of trouble it wasn't as bad as I anticipated and it was worth the effort.  This is probably the flakiest crust I've ever made!   I had some trouble with the strips on top but it didn't matter that they broke, the finish pie still looked great! 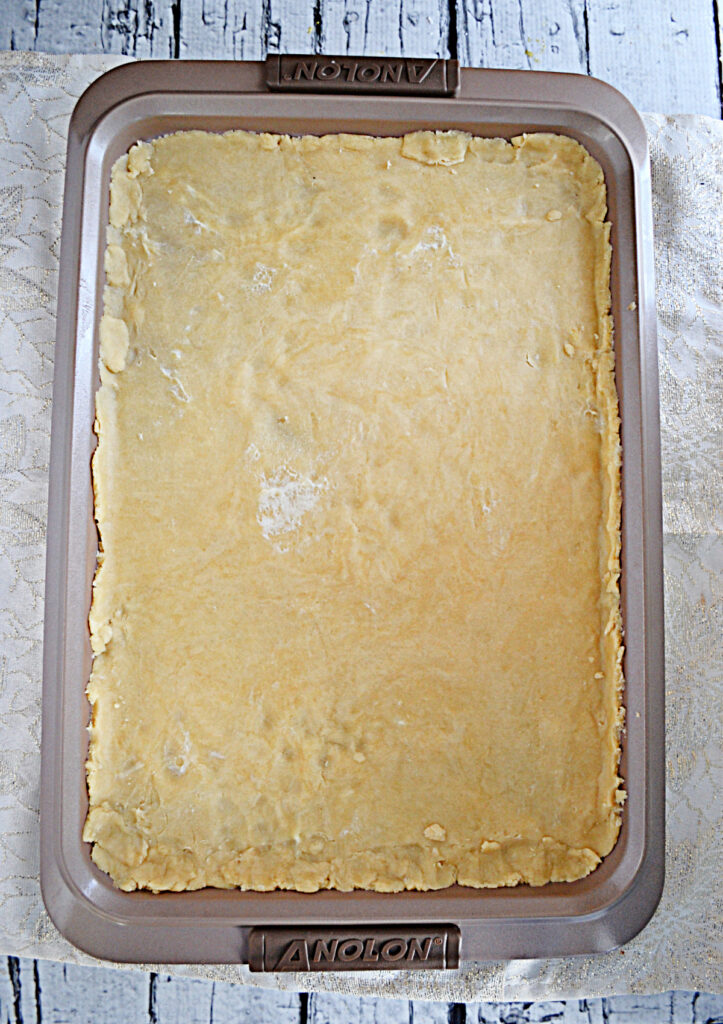 The crust is made with both shortening and butter.  The shortening helps to give it the flakiness while the butter makes it tender and tasty.  I added a bit of Taylor & Colledge almond extract paste and my did it elevate the flavor!

To make the pie I rolled out half the dough and flipped it into the bottom of the pan.  Then I topped it with the cooled berry mixture.   Finally I rolled out the other half of the dough.

Using a pastry cutter I cut long strips to put on top of the pie.   Some of them broke apart because of how delicate the dough is but it didn't matter.  I just lay pieces together so they looked like they were almost one piece and they baked up fine.

This pie was incredible.  The crust was probably my favorite pie crust ever.  It was flaky and buttery and had hints of almond in it.

The filling tasted like berries and was sweet but not overly sweet.   The pie crust strips on top with crisp and flaky.  I put coarse sugar on top which added more crunch and a bit of sweetness.

We had this pie when company came over and it fed plenty. It would be a great pie to make for a party because it serves a lot more than a traditional pie. 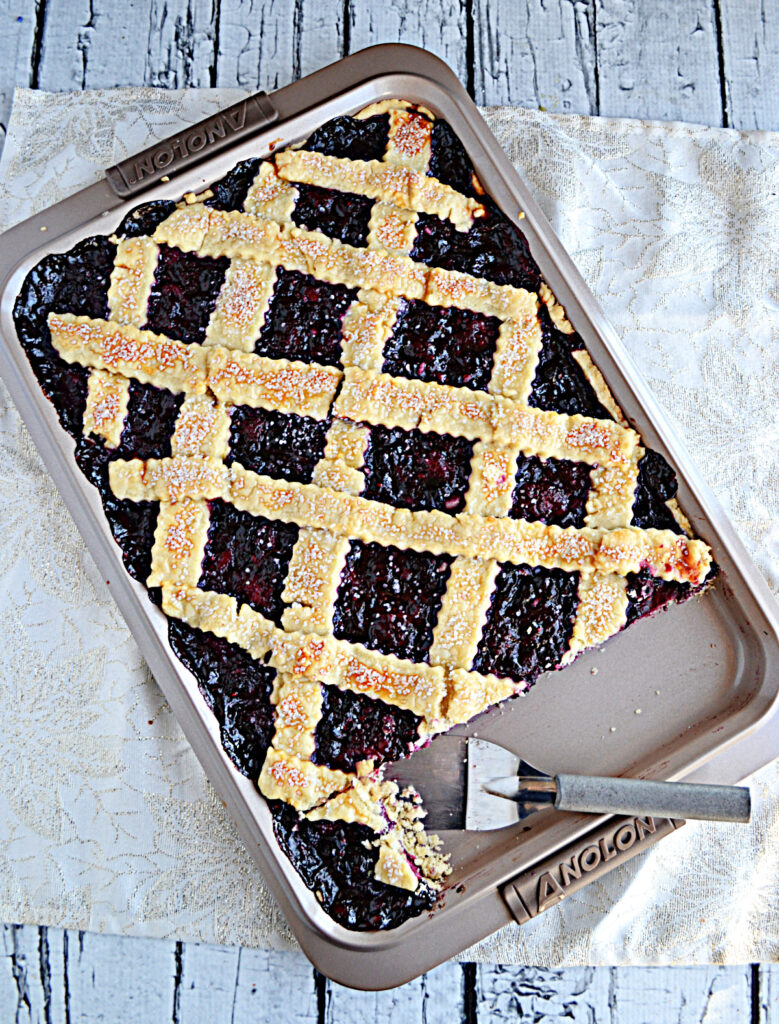 If you’ve tried my Triple Berry Slab Pie or any other recipe on Hezzi-D’s Books and Cooks please take a minute to rate the recipe and leave a comment letting me know how you liked it. I love hearing from you! You can FOLLOW ME on: 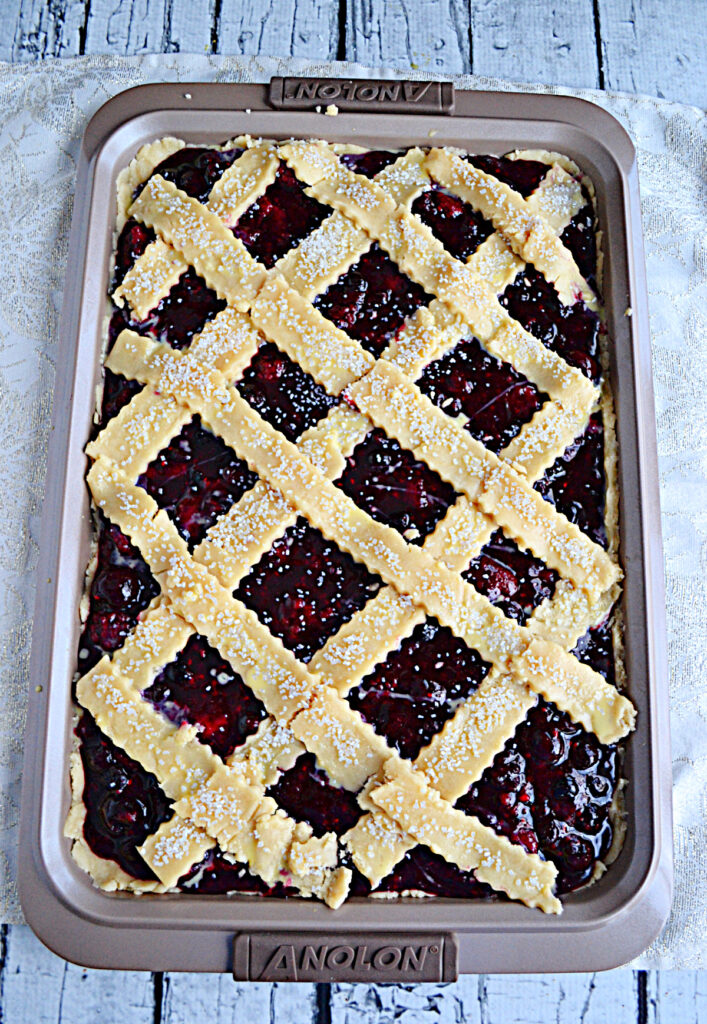