Today #SundaySupper is going to be a little different.  Not only are we sharing amazing recipes but we're featuring a selection of fruity and dry wines from The Wine Club by Schlossadler Wines.  Since 1979, Schlossadler Wines has been importing fine wines from family owned vineyards and bringing it right to your doorstep.

Since this summer has been crazy hot I haven't been able to cook nearly as much as I would like because we don't have air conditioning in the house.  I don't mind using the stove top if I'm cooking something for less then 20 minutes but I hate turning the oven on in this heat. 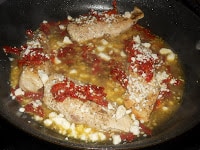 I wanted to make chicken on the stove top and thought that the Sauvignon Blanc I received would make a great pan sauce for this dish.   It was also nice to drink a glass of this light, crisp wine while I was cooking the dish.  I sauteed the chicken in olive oil and then removed it from the pan.  The original recipe called for goat cheese but I had feta leftover from a meal last week so I substituted that instead.  I also felt that the chicken needed a touch more seasoning and added a bit of oregano. 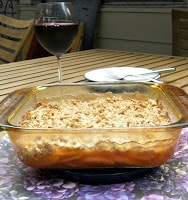 The chicken turned out moist and tender.  The sauce was light and worked well with the feta and sun dried tomatoes. It's a pretty dish that would be great for company and pairs nicely with the Sauvignon Blanc.  The wine is perfect for summer with it's fruity notes and crisp flavor.

Then I saw that the Blaufrankisch wine paired nicely with apple crisp.  Who am I to pass up a delicious apple crisp along with a glass of red wine for dessert?  I made a simple, basic apple crisp with an oat topping.  It was sweet and spiced with a bit of tartness from the apples.  The Blaufrankisch is fruity with spices and tasted incredible with the apple crisp.

1.  Sprinkle the chicken breasts with salt, pepper, and oregano.

2.  Heat the olive oil in a large skillet over medium heat.

3.  Place the halved chicken breasts in the pan and saute for 3-6 minutes on each side or until the chicken is cooked through.  Remove from the pan and place on a plate.

4.  In the same skillet add the garlic, wine, and chicken broth.  Cook the liquid down until it has reduced by half.

5.  Add in the sun-dried tomatoes and heat through.  Remove from heat and add the chicken breast and then the feta cheese. 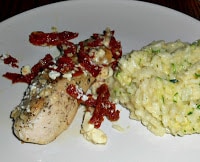 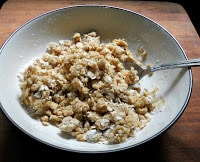 2.  Place the sliced apples in the bottom of an 8 x 8 baking dish.  Sprinkled with sugar, cinnamon, and nutmeg.

3.  In a small bowl combine the water and lemon juice.  Pour over top of the apple mixture.  (This is the way I normally make it but this time I actually just used a quart of my homemade apple pie filling for the base).

4.   In a small bowl combine the ingredients for the topping.  Mix well until the mixture is crumbly.  Sprinkle over top of the apple mixture in the baking dish.

5.  Bake for 35-40 minutes or until the apple filling is bubbling and the top is golden brown.  Remove from the oven and allow to cool for 5 minutes.  Serve with a large glass of Blaufrankisch. 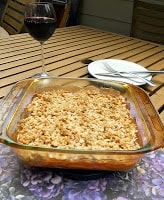 Here are more amazing recipes to pair with this fabulous wine: