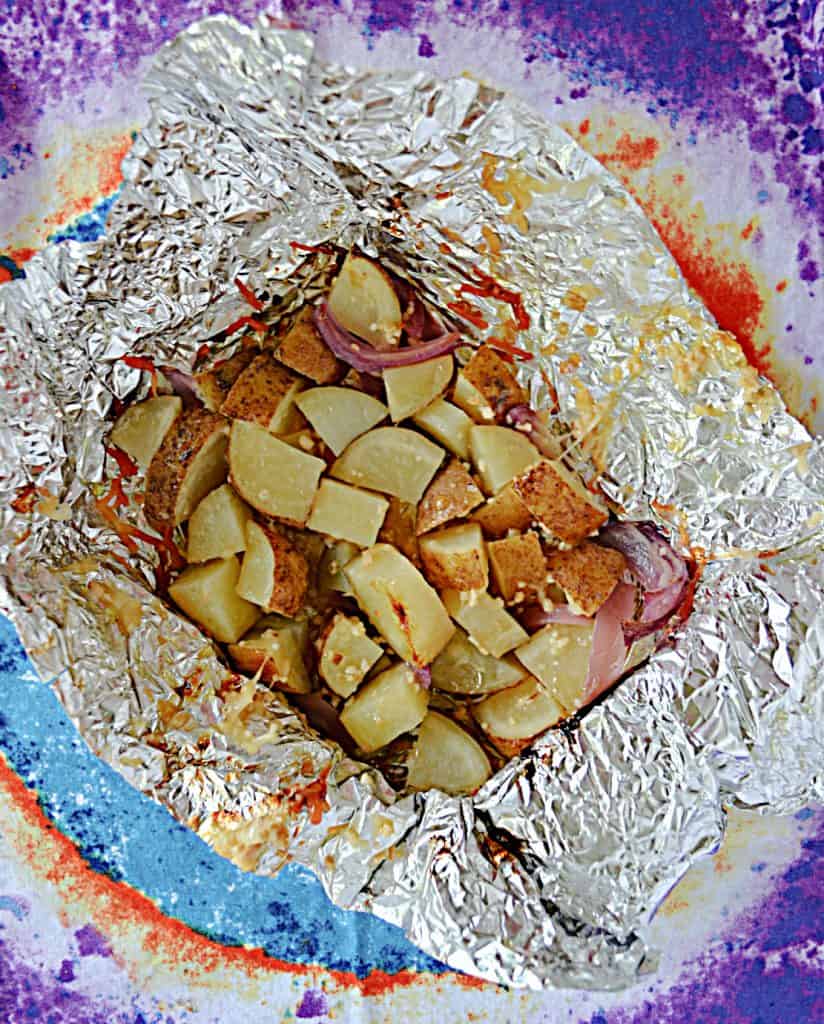 We grill a lot in the summer.   I try to find a protein and a vegetable that we can grill at least twice a week.   For proteins we usually have steaks, pork loin, or chicken.

When it comes to a vegetable I feel like I don't have many different options.  Sometimes we will make baked potatoes on the grill and other times we will grill corn on the cob.  That's about it.

So when I went to make my baked potatoes on the grill again I didn't want to have to leave them on for an hour so I decided to make something with cut potatoes.  I cut 4 medium sized potatoes into 1 inch chunks and then started looking around for what I wanted to flavor them with.

To make the potatoes heat a grill to medium high heat.

Cut the potatoes into 1 inch pieces.   Slice the red onions into half inch slices.

Divide the potatoes and onions between two pieces of foil.

Drizzle each packet with olive oil and sprinkle with salt, pepper, and garlic powder.  Put Parmesan cheese on top and toss to combine.

Fold in the foil to form a packet.

Grill for 25-30 minutes, flipping once during cooking.

As soon as the potatoes come off the grill open the packages and top each one with additional Parmesan cheese. 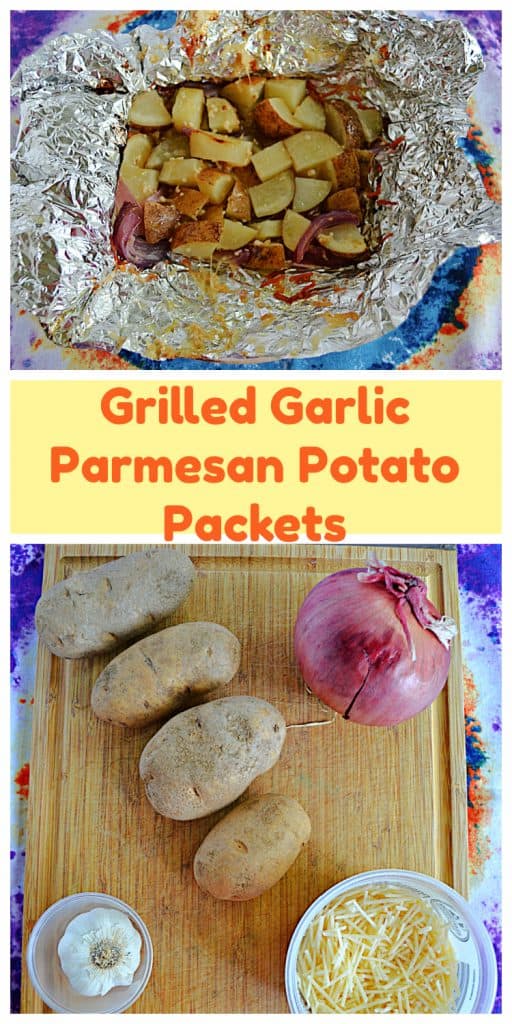 What I ended up coming up with was garlic.  Initially I was going to use garlic butter but I was afraid that the butter might burn so I used olive oil instead.

While I think that would have been good enough I also added in salt, peppers, and a sprinkle of garlic powder.  Then I tossed in a handful of Parmesan cheese for good measure.

One note on the Parmesan.   Some of it will stick to the foil so I recommend putting a handful in with the potatoes then putting on another handful as soon as they come off the grill.

What type of potatoes should I use?

It doesn't matter.   As long as they are cut into 1 inch pieces they will be fine to use.  I used Russet but red skinned potatoes would be good too.

Can I use a different type of oil?

Yes!  You can use canola or vegetable oil. I simply used olive oil because I had it on hand.

Can I substitute the red onions?

Yes.  You can use any type of onion or simply eliminate it.  It doesn't matter if you use them or not, they just add flavor.

Can I use a different cheese?

I would not.  Parmesan is good because it's a hard cheese and won't drip through the foil or burn.  You can go without the cheese all together but I wouldn't use a different type.

Can I add other veggies?

Sure!  Make sure they are also cut into similar sized pieces before adding them.  Bell peppers, carrots, or chunks of corn on the cob would work in these packets. 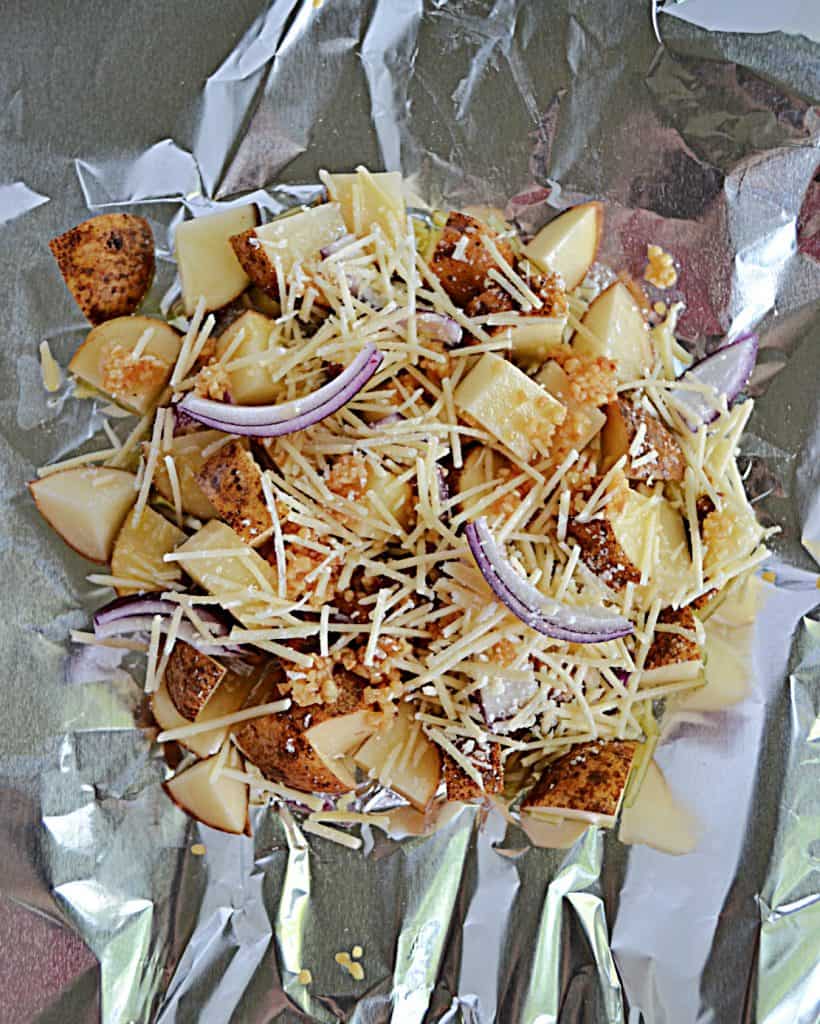 I was happy with how these turned out.  The potatoes were tender but not mushy.  Don't overcook them or they will get too soft.

The garlic was the front flavor but the salt and pepper were a nice addition.  The Parmesan cheese added a nice saltiness to the dish as well.

This is a great dish to serve with any grilled protein.  It can also be made in the oven if it isn't grilling weather.

If you’ve tried my Grilled Garlic Parmesan Potato Foil Packets or any other recipe on Hezzi-D’s Books and Cooks please take a minute to rate the recipe and leave a comment letting me know how you liked it. I love hearing from you! You can FOLLOW ME on: 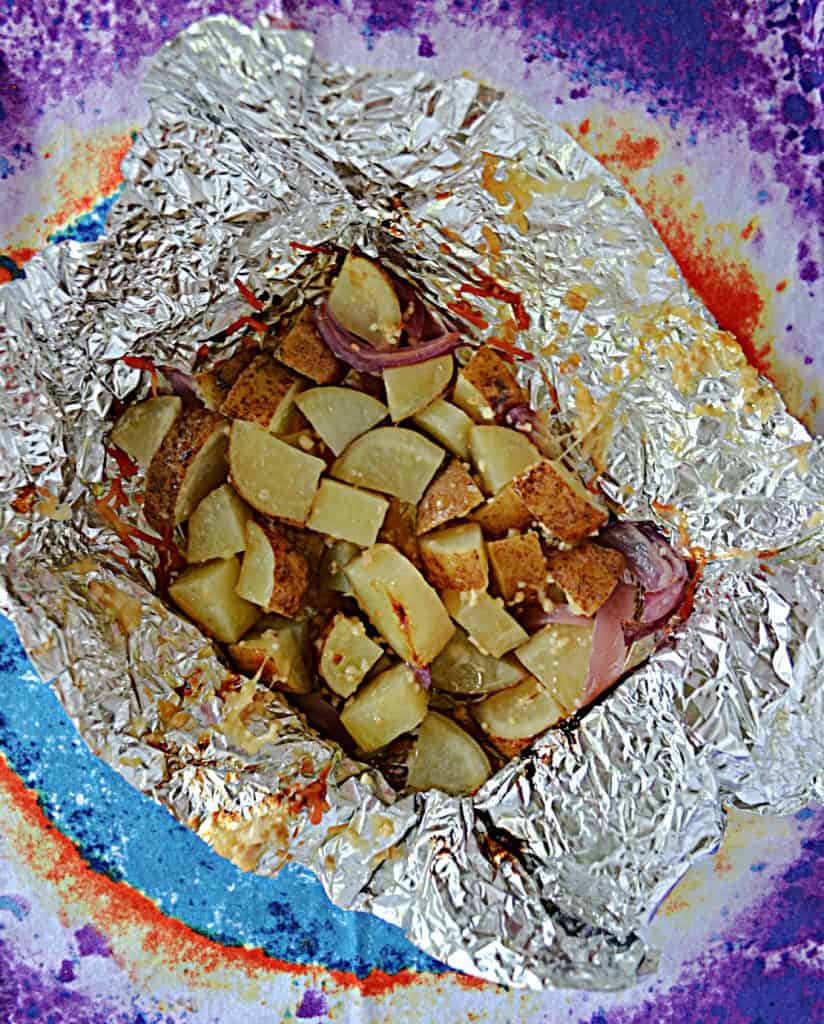