King Cake Cupcakes take a delicious yellow cupcake and fills it with a cinnamon mixture then tops it off with a powdered sugar glaze and Mardi Gras sprinkles for a tasty and festive dessert!  This recipe originally published February 2012. 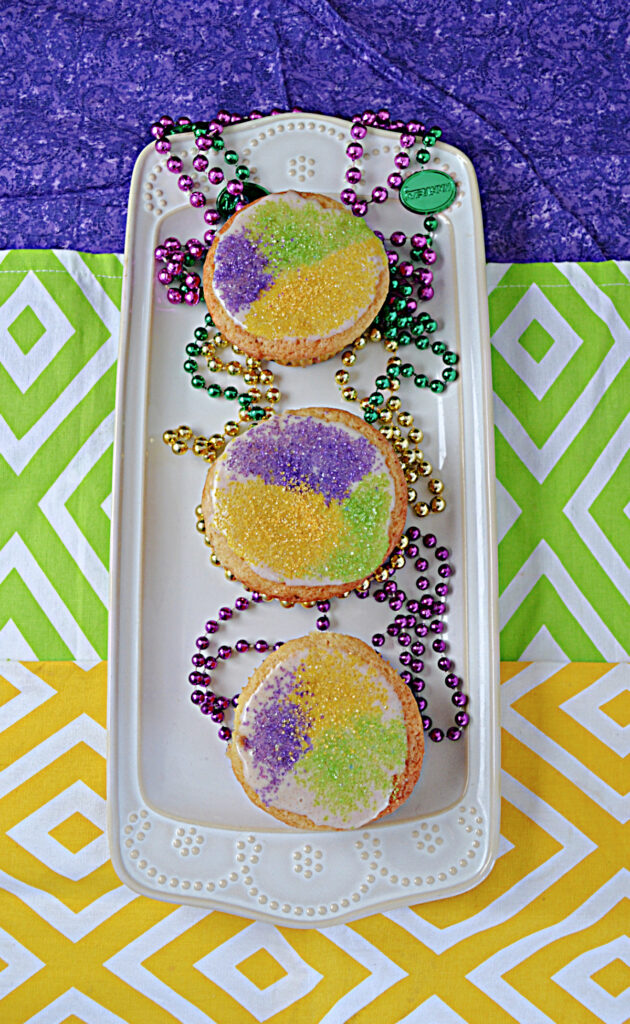 Get out the green, gold, and purple beads because it's Mardi Gras time! As a kid I didn't really know about Mardi Gras and we certainly didn't celebrate it but as an adult I'm all about the Mardi Gras food!

Several years ago I made a large King Cake for our Mardi Gras celebration.  While it was delicious, it took a lot of work.  While I loved the flavors I didn't have that kind of time to dedicate to another King Cake so I adapted it into these King Cake Cupcakes which are a whole lot easier. 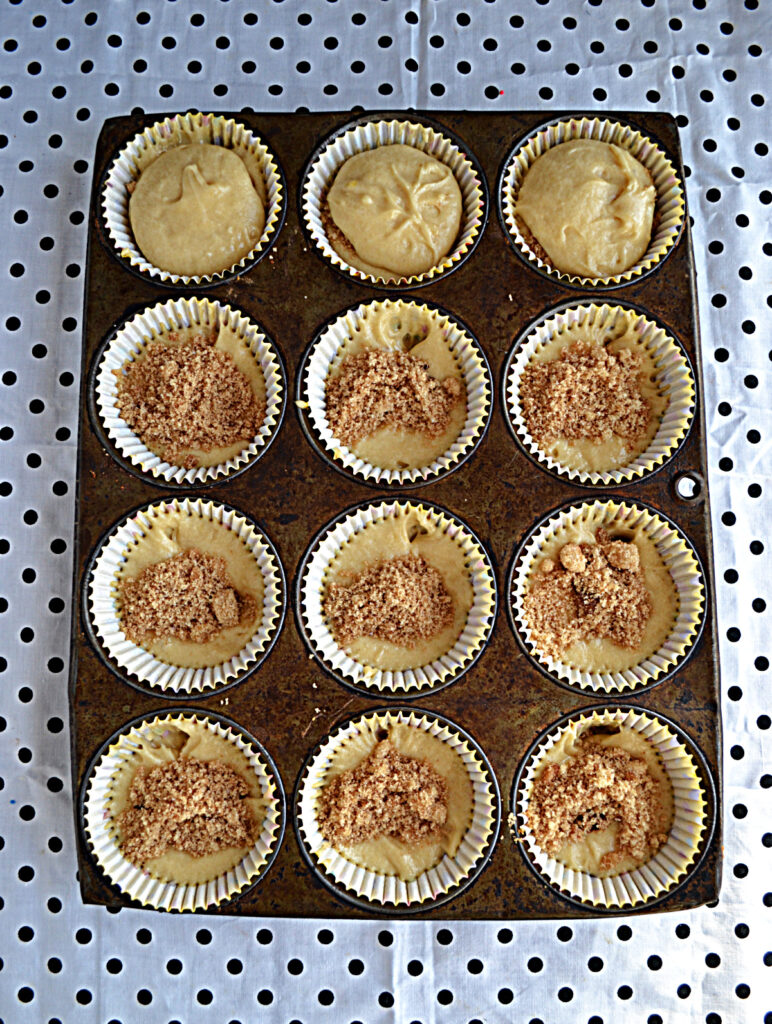 1.  Preheat the oven to 350 degrees. Line two muffin tins with festive cupcake liners and set aside.

2.  In a medium mixing bowl combine the flour, baking powder, and salt.  Set aside.

3.  In a large mixing bowl cream together the the butter, sugar, and brown sugar until well combined and fluffy.

4.  Add in the sour cream, eggs, and vanilla.  Mix for several minutes or until the batter is smooth.

5.  In a small bowl melt the butter for the filling in the microwave.  Add in the brown sugar, cinnamon, salt, and nutmeg and mix until well combined.

6.  Put a tablespoon of cupcake batter into each cupcake cup. I used a cookie scoop to get the same amount in each cup.

7.  Put a teaspoon of filling on top of the batter.  Then carefully pour another tablespoon of batter on top of the filling.  Repeat for all 24 cupcakes. 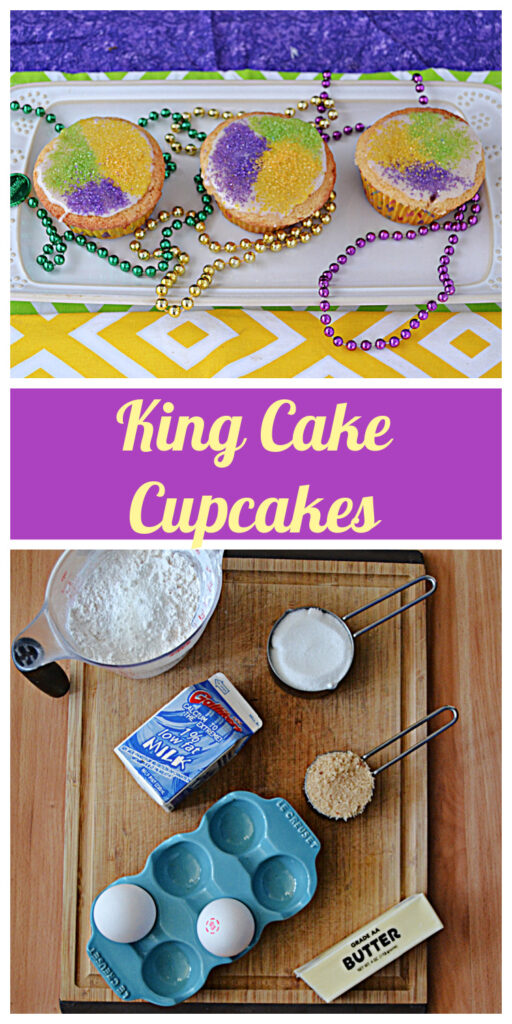 I ended up just using my favorite yellow cupcake recipe and then filling it with a cinnamon sugar mixture.  I thought that would best resemble a King Cake.

Once they came out of the oven I used a powdered sugar glaze like the one on a King Cake.   I have another Mardi Gras Cupcake recipe where I use a buttercream frosting but I think the glaze was the right choice for these.

Finally I put some sprinkles on top.  I did purple on some, yellow on others, and then green on a few others.   Then I decided to do all three colors on single cupcakes and I loved the effect!

What is Mardi Gras?

Mardi Gras is the Carnival celebration which begins on or right after the Christian celebration of Epiphany. Mardi Gras is French for "Fat Tuesday" which is what they called it because so many people eat rich, fatty foods before the Lenten season. Mardi Gras is always the day before Ash Wednesday which is the start of Lent.

What is a King Cake?

A King Cake is traditionally served on or a few days before Mardi Gras. It's a cake associated with the Christian celebration of Epiphany in many countries and is also known as a three kings cake. While the ingredients can differ from country to country one thing that stays the same is that a baby figurine is baked into the cake or hidden inside after baking. Whoever gets the piece of cake with the baby in it wins a prize! 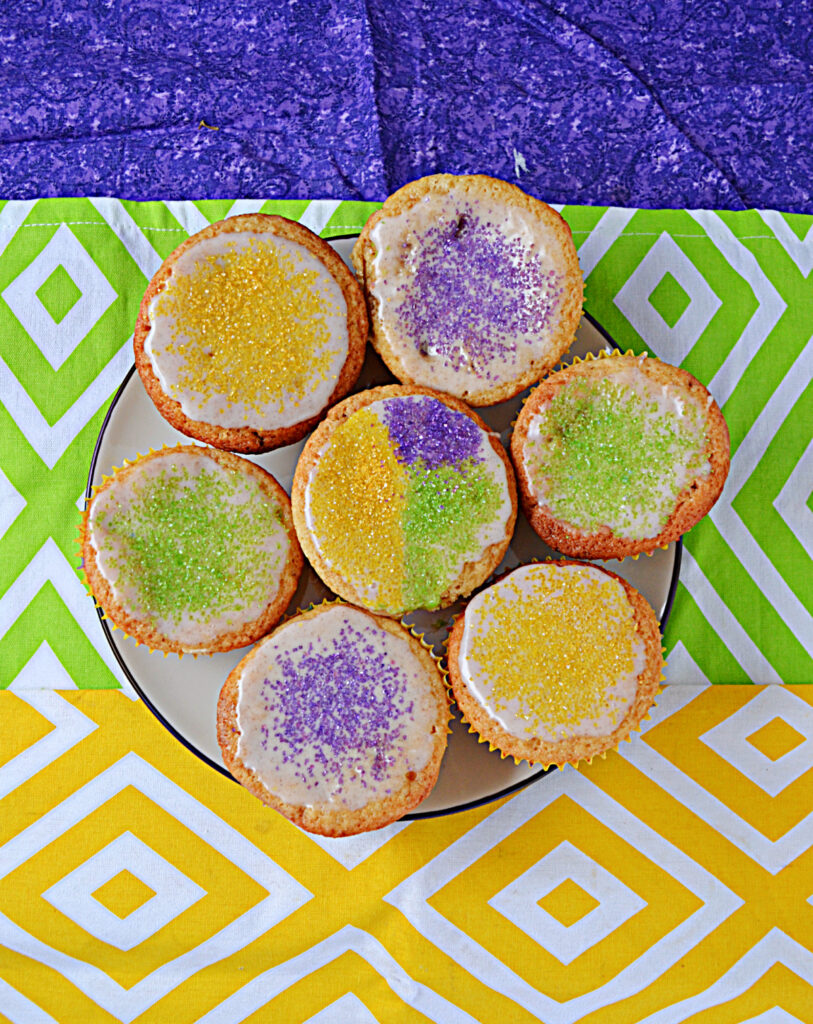 Can I use another cupcake recipe?

Sure!   You can use any basic yellow cupcake, white cupcake, or vanilla cupcake recipe as the base of these cupcakes.  You could even use a cake mix to make the base, just make sure you make the filling on your own!

I don't like powdered sugar glaze.   Can I make something else?

You can totally use a buttercream frosting in place of the glaze.  Italian buttercream would be tasty with these cupcakes or even a Swiss meringue buttercream.  I would probably skip the American buttercream only because the sweetness will overpower the cinnamon flavor in the filling.

I took these into work and they were a huge hit.  I had at least five people come in to tell me these were one of the best desserts I've made so that was encouraging.

The cupcake is a tender yellow cake that's filled with sweet brown sugar and cinnamon.   The glaze added a bit more sweetness and the sprinkles add color and a bit of crunchiness.  It really is a delicious bite. 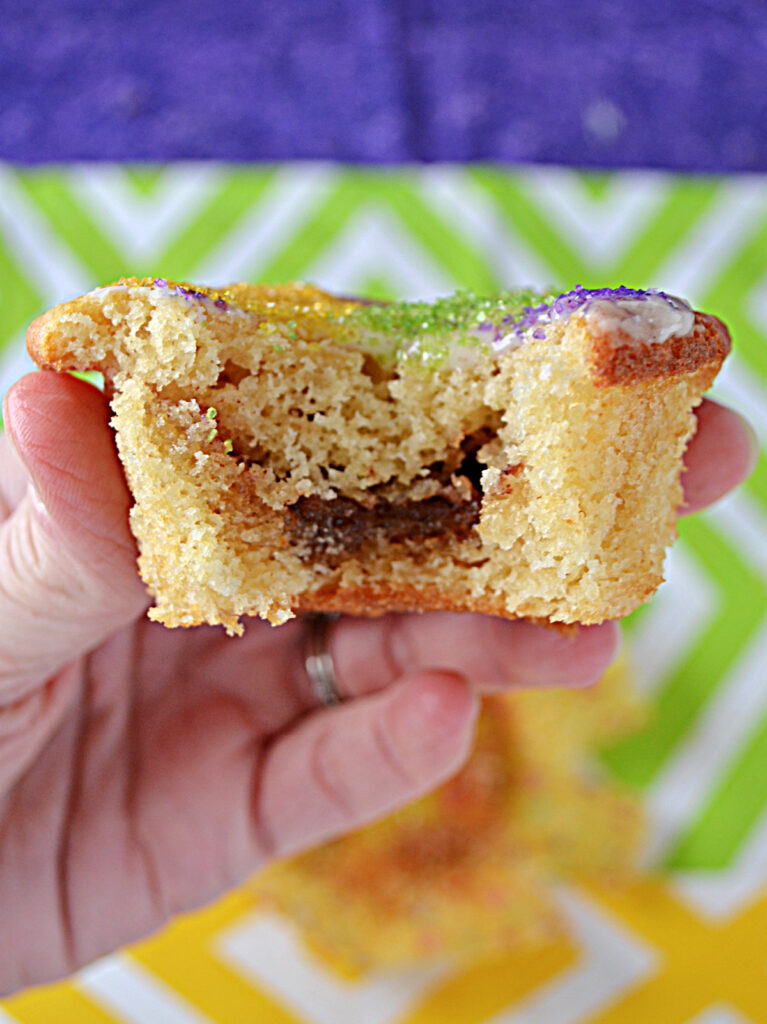 If you’ve tried my King Cake Cupcakes or any other recipe on Hezzi-D’s Books and Cooks please take a minute to rate the recipe and leave a comment letting me know how you liked it. I love hearing from you! You can FOLLOW ME on: 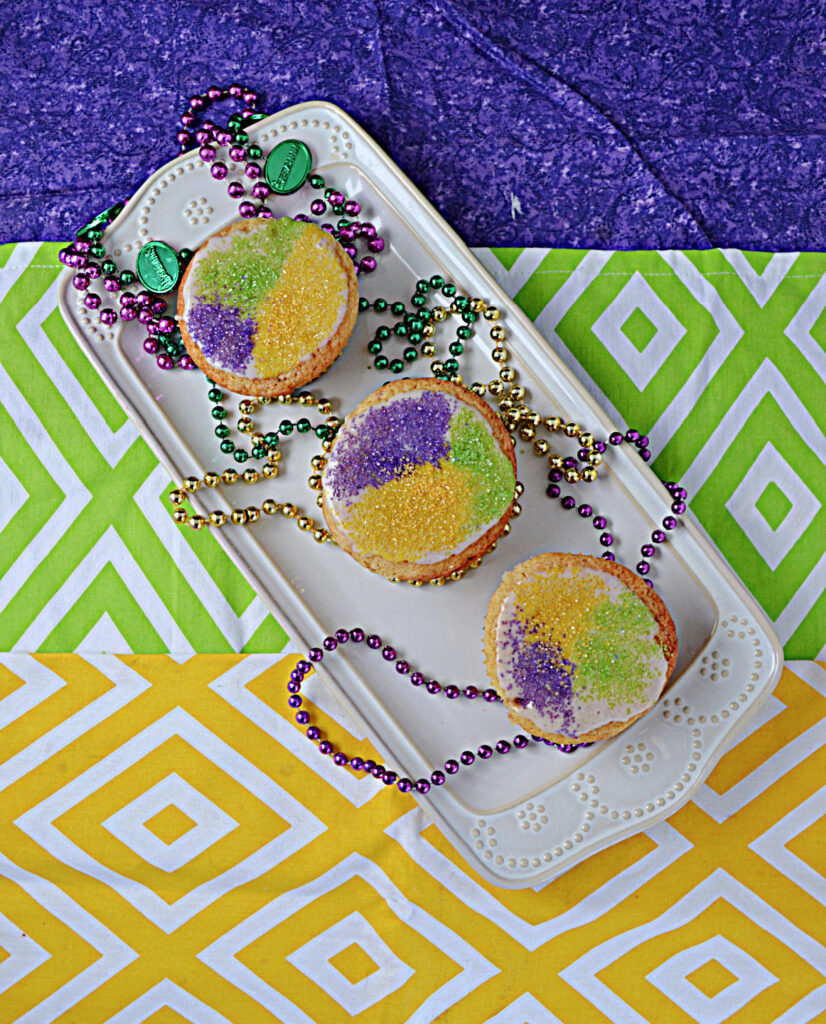 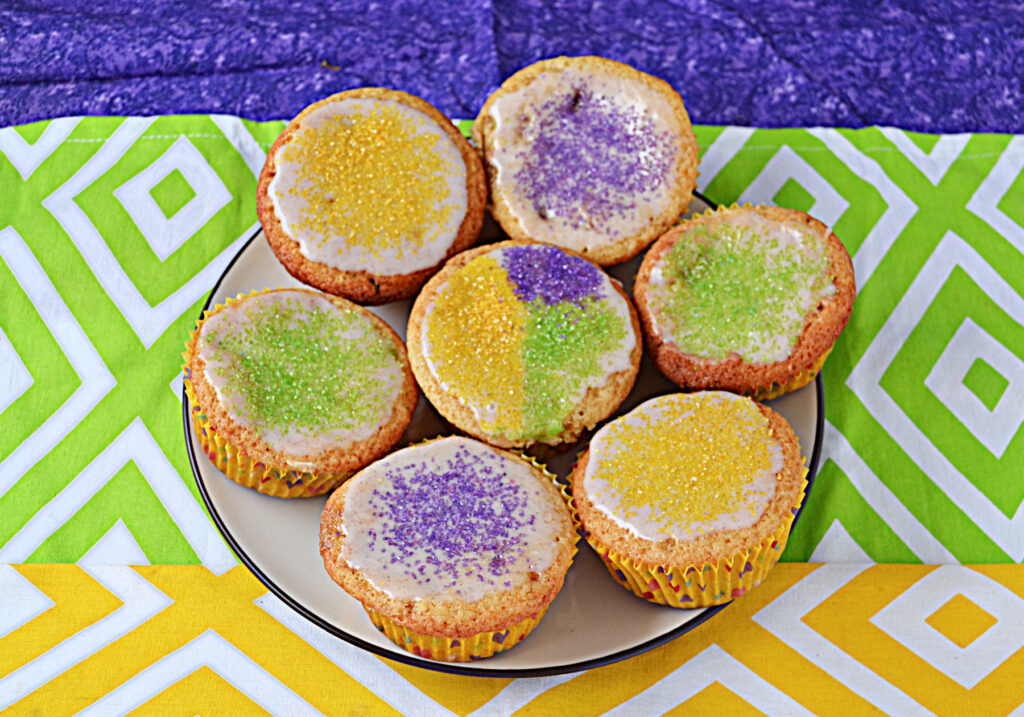